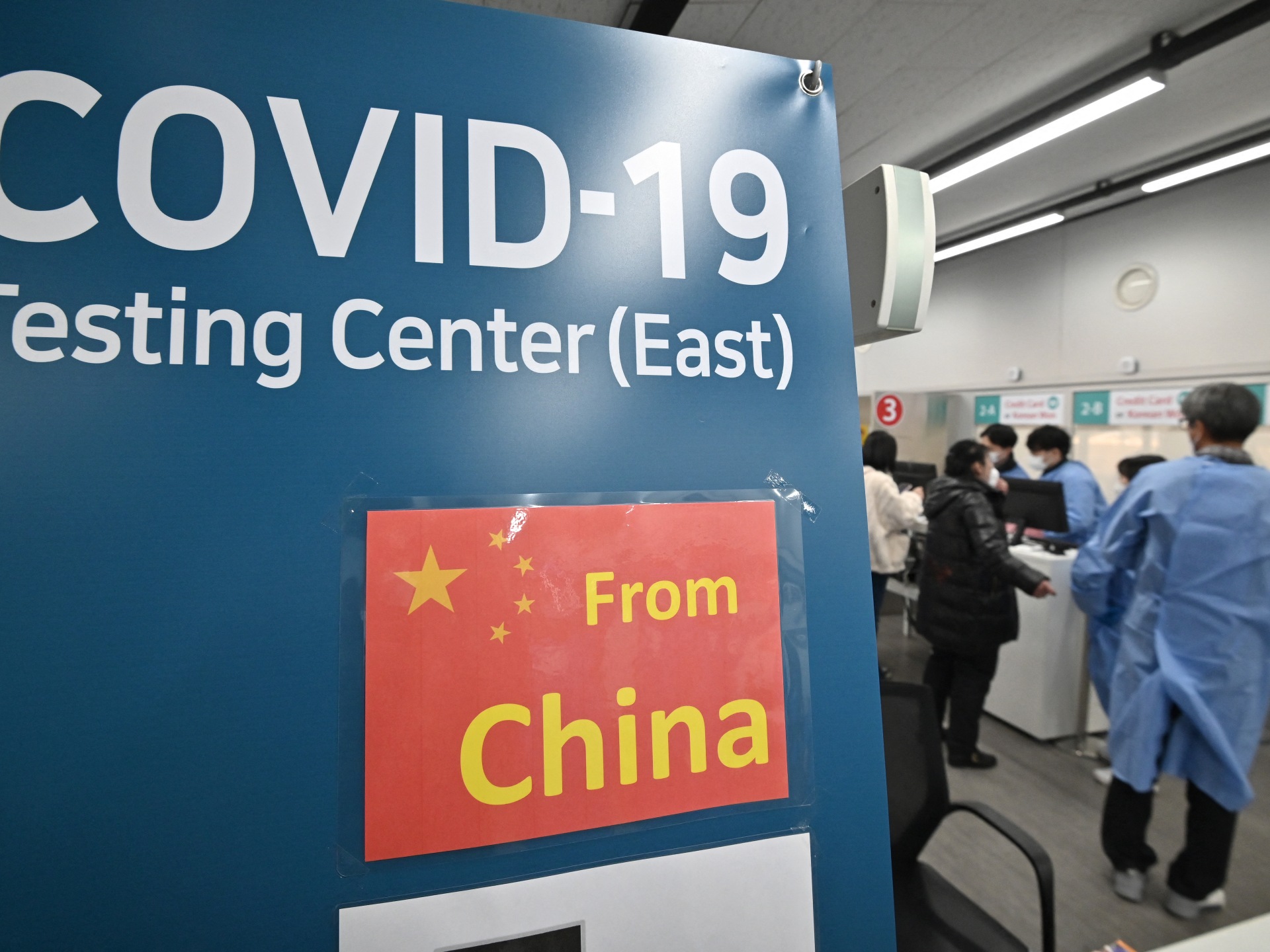 The recent imposition of COVID-19 restrictions on travellers from China by more than a dozen countries has left Chinese people feeling deeply unhappy at what some view as a selective application of science.

Countries such as France, Italy, Japan and the United States have placed various conditions on travellers from China – including pre-departure negative tests, on-arrival testing and fever checks.

China has experienced an explosion in COVID cases and deaths over the past month after abruptly doing away with the country’s strict “zero-COVID” strategy and dropping restrictions on travel.

Some 60,000 people were reported to have died from the virus between December 8 and January 12, according to the Chinese government, though even that figure could underestimate the true extent of the death toll.

Nevertheless, civil rights groups and scientists have raised questions over what they see as China-centred COVID curbs.

“In 2020, at the onset of the pandemic, our former president (Donald Trump) issued a China travel ban that is similar to the one in place today,” Kulkarni said in an email.

Trump’s travel ban together with his casual anti-China rhetoric, led to a rise in hate incidents in the US against Asians and Asian-Americans that “continue to affect our communities till today”, Kulkarni said.

In October, AAPI Hate published a report on how political rhetoric around the COVID-19 pandemic had led to incidents of anti-Asian scapegoating.

“To avoid causing harm to Asians and Asian Americans, elected officials must advocate for public health policies that keep our communities safe.”

Beijing-based epidemiologist Sol Richardson of Tsinghua University said there is no significant risk from an “epidemiological perspective” to countries allowing entry to China-based travellers, since variants leading the COVID surges in China, such as the Omicron sub-variant BA. 5, are already circulating elsewhere.

“This [BA.5] and related variants already exist in many countries and are the primary variants in the Western world. The same variants have been found in travellers from China arriving in Western countries,” he told Al Jazeera.

“BA. 5 accounts for 97. 5 percent of all local infections in China based on data the government have submitted. In that sense, with high population immunity in Western countries and vaccines, it’s not a concern at the moment,” Richardson said.

Michael Mina, an epidemiologist and chief scientific officer at the tele-health company eMed, believes it is “very unlikely” the restrictions placed on Chinese travellers will make have much of an effect.

“In the US and most nations putting these restrictions in place, the local spread (nearing endemic spread) is very significant. Mina explained to Al Jazeera that cases imported from China and elsewhere represent only a small fraction of the still large number of cases being brought into America every day.

“With hundreds of thousands of cases in the US at any given time, the importation of additional cases is relatively insignificant.”

While Mina said that restrictions may “limit” the introduction of new COVID-19 variants, he noted that so far, countries have not been able to prevent “new high fitness variants” from emerging and spreading globally.

What is needed for that is better detection.

“Knowledge” is key during a pandemic, Mina said.

“Knowing where viruses are, and when, is the first step to proper control.”

“We need faster and better detection of outbreaks when they emerge. He said that we need to increase the indoor air quality on a large scale. This can take many years, or even decades, depending on how long it takes.

It is also important to “maintain baseline surveillance methods” that are sustained and ongoing, he said, citing sequencing of wastewater as an example.

Echoing Mina, Tsinghua University’s Richardson said genome sequencing – rather than travel restrictions – was key to helping curb the spread of the virus.

“I think the solution is genomic testing of the positive COVID cases. WHO [World Health Organization] supports this, in China as well as around the globe,” he stated.

“Yes, China currently has the highest incidence of COVID cases in the world, it has a large population. However, new variants could emerge anywhere in the world.”

Much like the competing scientific arguments, opinions among people from China and Hong Kong also differ regarding the curbs on their international travel.

Hong Kong resident Arthur said the curbs seemed “reasonable” while Guo, a Chinese national and PhD student in the United Kingdom, said he was deeply disappointed by them.

“The Chinese government has never fully disclosed the COVID situation,” Arthur told Al Jazeera, citing discrepancies in the government’s infection numbers during the course of the pandemic that began in late 2019.

The WHO has also criticised Beijing’s apparent lack of transparency and said that in the absence of “comprehensive” information being released by authorities in Beijing, the travel restrictions were “understandable”.

Guo, 28, who hails from Huainan in Anhui province, had originally planned to fly on January 28 from her hometown in China back to London via Shanghai.

However, with the UK now requiring a negative test 48 hours before departure, Guo said that will mean she must leave for Shanghai – China’s most populous city – at least two days earlier than scheduled as she is unable to obtain an English-language COVID test result in her city.

“I have to now rebook my flight and look for accommodation. I no have family or friends that I can stay with in Shanghai,” she said.

While the additional trip to Shanghai was “disappointing and frankly inconvenient”, Guo said the itinerary change means she will now spend less time with her family during the Chinese New Year period that begins on Sunday.

“I’m very unhappy about it,” she said.

The post Is bias, not science, behind COVID-19 curbs on China travellers? appeared first on Al Jazeera.