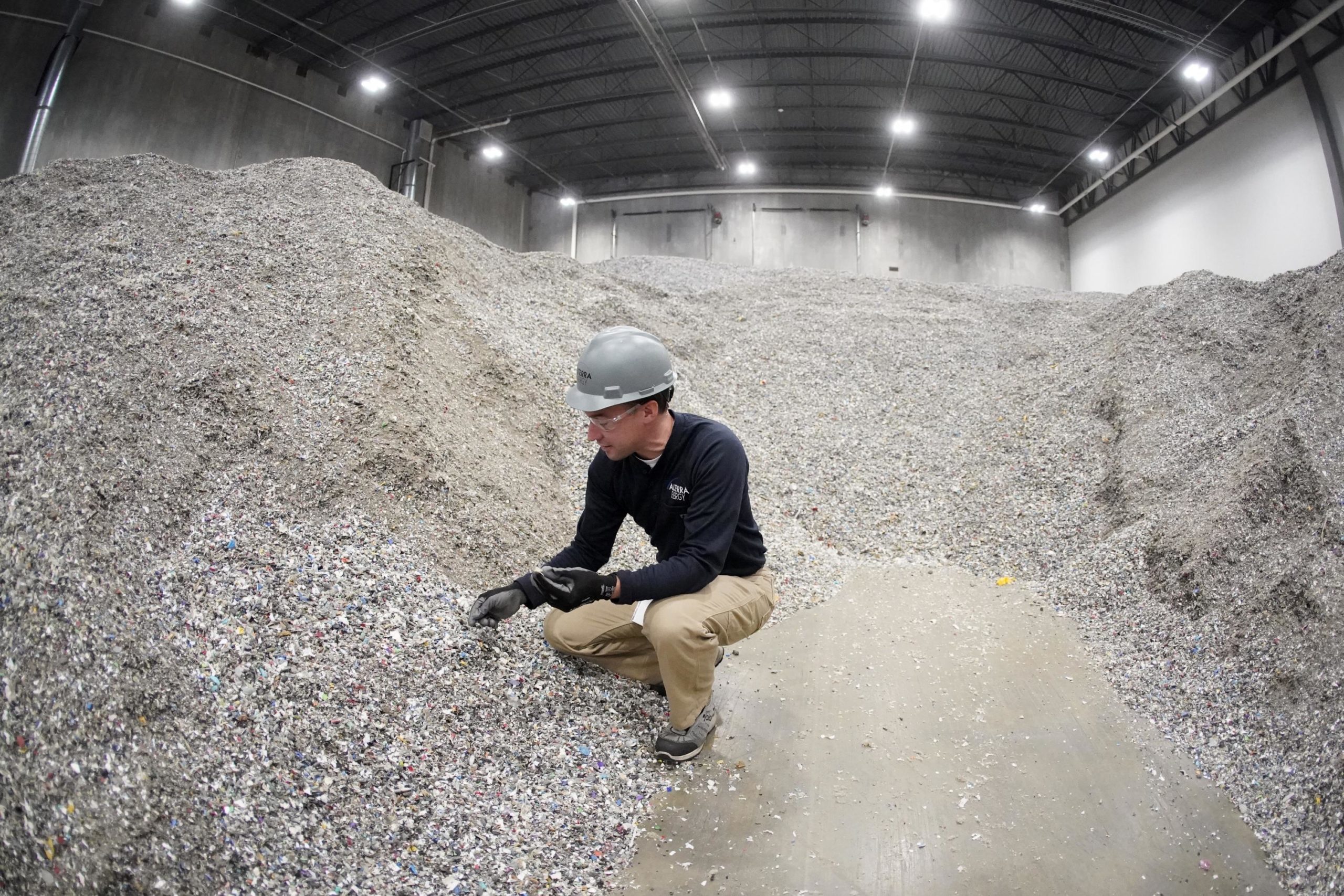 PROVIDENCE, R.I. — The plastics industry says there is way to help solve the crisis of plastic waste plaguing the planet’s oceans, beaches and lands– recycle it, chemically.

Chemical recycling typically uses heat or chemical solvents to break down plastics into liquid and gas to produce an oil-like mixture or basic chemicals. According to industry leaders, this mixture could be made into new plastic pellets.

However, environmental groups claim that advanced recycling distracts from the real solution of producing and using less plastic. They suspect the idea of recyclable plastics will enable the steep ramp up in plastic production to continue. And while the amount produced globally grows, recycling rates for plastic waste are abysmally low, especially in the United States.

Plastic packaging, multi-layered films, bags, polystyrene foam and other hard-to-recycle plastic products are piling up in landfills and in the environment, or going to incinerators.

Judith Enck is the president and founder of Beyond Plastics. She says that plastics recycling does not work, and will never succeed. She said that plastics recycling is impossible because of the thousands of chemical additives and colors used to make it different. They can’t all be combined and recycled the traditional, mechanical manner. Nor is there much of a market for recycled plastic, because virgin plastic is cheap, she said.

So what is more likely to happen than actual recycling, said Enck, a former regional administrator at the U.S. Environmental Protection Agency, is the industry will shift to burning plastics as waste or as fuel.

Lee Bell, a policy advisor for the International Pollutants Elimination Network, thinks chemical recycling is a public relations exercise by the petrochemical industry. The purpose is to dissuade regulators from capping plastics production. Making plastic could become even more important to the fossil fuel industry as climate change puts pressure on their transportation fuels, Bell said.

The industry has made roughly 11 billion metric tons of plastic since 1950, with half of that produced since 2006, according to industrial ecologist Roland Geyer. Global plastic production is expected to more than quadruple by 2050, according to the United Nations Environment Programme and GRID-Arendal in Norway.

The international Organisation for Economic Co-operation and Development says the share of plastic waste that is successfully recycled is projected to rise to 17% in 2060 from 9% in 2019 if no additional policies are enacted to restrain plastic demand and enhance recycling, but that wouldn’t begin to keep up with the projected growth in plastic waste. With more ambitious policies, the amount of plastic waste that is recycled could rise to 40% to 60%, according to OECD.

Two groups working to reduce plastic pollution, the Last Beach Clean Up and Beyond Plastics, estimated that the U.S. rate for recycling plastic waste in 2021 was even lower — 5% to 6%, after China stopped accepting other countries’ waste in 2018.

The U.S. national recycling strategy says no option, including chemical recycling, should be ruled out. According to the industry, these plants should be viewed as manufacturing plants. They should be legally defined that way, and not as waste management. About 20 states have adopted laws in the past five years consistent with that wish. It’s an attempt to avoid the stricter environmental regulations applicable to waste management facilities, according to opponents.

The U.S. facilities currently recycling plastic into new plastic are small — the largest is a 60-ton-per-day plant in Akron, Ohio, Alterra Energy, according to the ACC.

Alterra Energy says it takes in the hard-to-recycle plastics, like flexible pouches, multi-layered films and rigid plastics from automobiles — everything except plastic water bottles since those are recycled mechanically, or plastics marked with a “3” since they contain polyvinyl chloride, or PVC. The company’s president, Jeremy DeBenedictis said that our mission was to eliminate plastic pollution. “That is not just a tag line. We all truly want to solve plastic pollution.”

The Ohio facility typically takes in 40 tons to 50 tons per day, heating and liquifying the plastic to turn it back into an oil or hydrocarbon liquid, about 10,000 gallons to 12,000 gallons daily. About 75% of what comes into the facility can be liquified like that. Another 15% is turned into a synthetic natural gas to heat the process, while the remainder — paper, metals, dyes, inks and colorants — exit the reactor as a byproduct, or carbon char, DeBenedictis said. The char is disposed of as nonhazardous waste, though in the future some hope to sell it to the asphalt industry.

The process doesn’t involve oxygen so there’s no combustion or incineration of plastics, DeBenedictis said, and their product is trucked as a synthetic oil to petrochemical companies, essentially the “building blocks on a molecular level for new plastic production.”

The materials they take in, that haven’t been able to be recycled until now, should not be sent to landfills, dumped in the ocean or incinerated, DeBenedictis said. That next level must be new technology. This is what we call chemical recycling, or advanced recycling. That’s the next frontier,” he said.

“Let’s not fool ourselves. Fred Schmuck, CEO of the company said that this is the best time. “There is absolutely no way we can meet our climate goals without addressing plastic waste.”

DeBenedictis said he’s licensing the technology to try to grow the industry because that’s the “best way to make the quickest impact to the world.” A Finnish oil and gas company, Neste, is currently working to commercialize Alterra’s technology in Europe. The main technologies for chemical recycling are pyrolysis gasification and depolymerization. Neil Tangri, the science and policy director at the Global Alliance for Incinerator Alternatives, is skeptical. According to Tangri, pyrolysis will change all things since the 1990s. But he is skeptical. Instead, plastic production keeps climbing.

GAIA views chemical recycling as a false solution that will facilitate greater production of virgin plastic — a high-energy process with high-carbon emissions that releases hazardous air pollutants, Tangri said. Instead, GAIA wants plastic production to be dramatically scaled back and only recyclable plastics to be produced.

“Nobody needs more plastic,” Tangri said. We keep trying to solve the production problems of recycling, but we really need to make changes in how we produce and what we use. That’s where the solution lies.”

In Rhode Island, state lawmakers considered a bill this year to exempt such facilities from solid waste licensing requirements. Residents near Providence and environmentalists opposed it, fearing that the bill would open up new plants. State environmental officials sided with them.

Monica Huertas, executive director of The People’s Port Authority, helped lead the opposition. She said that the neighborhood has been overburdened already, and she often suffers from asthma after she walks around.

Dwayne Keys said it’s unfair that he and his neighbors always have to be on guard for proposals like these, unlike residents in some of the state’s wealthy, white neighborhoods. He said that the port region has many environmental risks, which residents are not able to benefit economically. Keys refers to it as environmental racism.

“The assessment is, we’re the path of least resistance,” he said. “Not that there’s no resistance, but the least. Our group is made up of volunteers who volunteer their time. We don’t have wealth or access to resources or the legal means, as opposed to our white counterparts in higher income, higher net worth communities.”

The chemistry council’s Baca said the facilities operate at the highest standards, the industry believes everyone deserves clear air and water, and he would invite any detractors to one of the facilities so they can see that firsthand.

U.S. plastics producers have said they will recycle or recover all plastic packaging used in the United States by 2040, and have already announced more than $7 billion in investments in both mechanical and chemical recycling. Baca stated that we stand on the brink of a sustainable revolution in which circularity is the central focus. “And innovative technologies like advanced recycling will be what makes this possible.”

Kate O’Neill wrote the book on waste, called “Waste.” A professor in the Department of Environmental Science, Policy and Management at the University of California, Berkeley, she has thought a lot about whether chemical recycling should be part of the solution to the plastic crisis. She said she has concluded yes, even though she knows saying so would “piss off the environmentalists.”

“With some of these big problems,” she said, “we can’t rule anything out.”

The post Industry: Advanced recycling is a solution to plastic crisis appeared first on Associated Press.