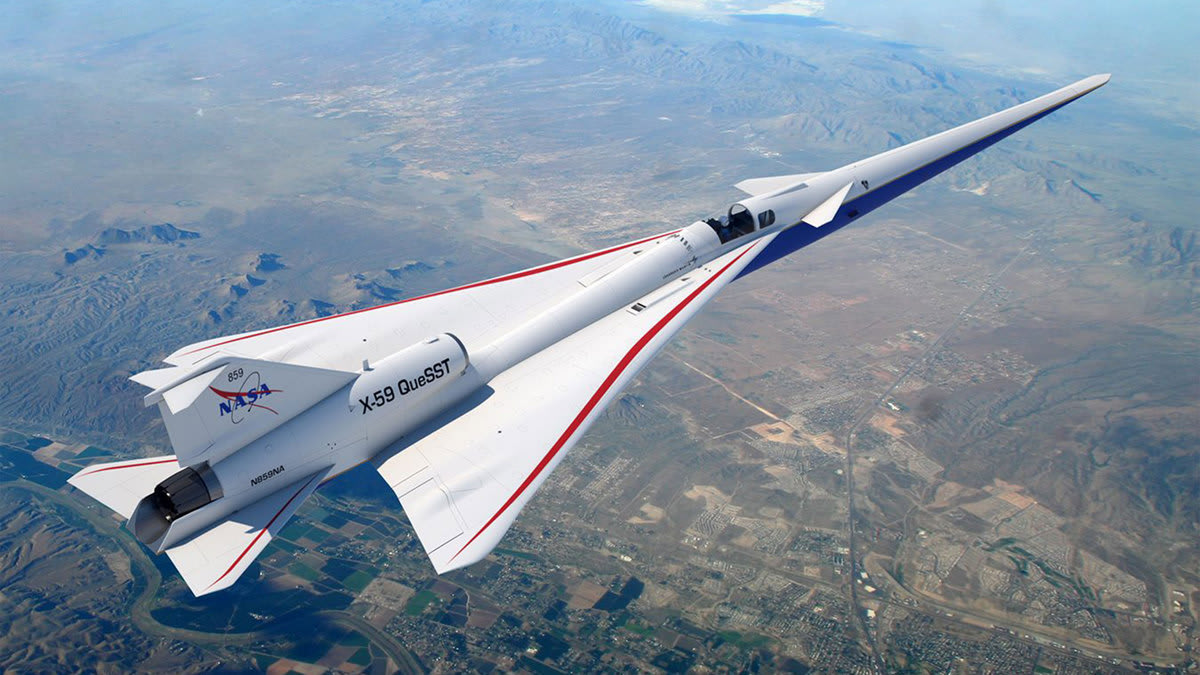 Every holiday season seems to bring with it massive air travel woes: congestion, delays, and cancellations–and this year was no different. Well, scratch that–it was somehow even worse than normal.

Last week, a winter storm killed dozens and disrupted holiday travel plans for thousands more. Due to the inclement weather and woefully outdated technology, you had better chances getting Taylor Swift tickets than booking a Southwest Airlines flight that ended up taking off. Glitzy fountains that spout water in time with Frank Sinatra classics inside renovated terminals can’t distract from the fact that today, more than ever, air travel sucks.

If you know about the Concorde, you already know that we figured out a faster way to get people to their destinations decades ago–but a string of complications led to the once hyped supersonic jet’s failure.

Supersonic flights over land had been banned in the U.S. before Concorde’s rollout, and concerns of sonic booms (whether justified or not) abounded. According to an article in Conde Nast Traveller, people complained that Concorde flights overhead resulted in broken glass and freaked-out pets. A deadly 2000 crash coupled with widespread flight anxiety following 9/11 hastened the airplane’s demise–though arguably, it had been doomed from the start. Concorde aircraft were retired in 2003, after just 27 years of commercial operations. It turns out that breaking the sound barrier can be a lot more easy than dealing with its sonic consequences. But in the almost two decades since Concorde’s swan song, a slew of companies and government agencies are revisiting the idea of supersonic travel. At least one of these projects–the Lockheed Martin X-59 QueSST in collaboration with NASA–is gearing up for testing in 2023. Its goal is to replace the sonic boom with a much gentler sonic “thump.”

Could tomorrow’s travel end up being a lot more like yesterday’s?

A Brief History of Supersonic Flight

Passengers were first able to book flights on the Concorde in the 1970s, but the first supersonic flight took place decades prior in 1947. The National Advisory Committee for Aeronautics, U.S. Army Air Forces, and U.S. Air Force selected Chuck Yeager to fly the Bell X-1, nicknamed Glamorous Glennis after Yeager’s wife. (Yeager, a World War II veteran who had flown a fighter-bomber in the European theater, had two broken ribs at the time from a horseback riding accident but seemingly did not want to pass up the opportunity to surpass Mach 1, the speed of sound. )

After the X-1’s proof-of-concept flight, the U.S. and countries including France, Sweden, Germany, and Russia, developed military supersonic flight programs, but it wasn’t until 1963 that President John F. Kennedy announced a commercial supersonic flight program. One year later, Operation Bongo II was launched by the Federal Aviation Administration. In it, eight bomber planes flew over Oklahoma City every day to assess the impact of the sonic booms. The daily interruptions caused disruptions were obviously not appreciated by city dwellers. Oklahomans claimed that their service dogs caused falls and damaged ceilings, as well as older people. Even flocks of chickens “had been crazed into erratic flight.” The FAA eventually paid out over $8,000 in damages over their handling of the sonic boom tests and the experiment ended prematurely due to the deluge of complaints.

“It was 180 days ago that the normal quiet of Oklahoma City was interrupted so a whole city, maybe for the first time in history, could become an experimental laboratory,” read the start of one news article from the end of Operation Bongo II. The fallout engendered so much ill will against the program that U.S. funding for supersonic transport was eventually cut and supersonic flight over American soil was banned in 1973.

European countries and the Soviet Union continued developing supersonic passenger aircraft during this time. The Soviet Tupolev Tu-144 and the United Kingdom and French-led Concorde flew passengers at supersonic speeds in the 1970s, but both ceased commercial service for a number of reasons including safety concerns, lagging public interest, and noise complaints that limited where the planes could fly. While it is unfair to claim that the Concorde was killed by the sonic boom, it did not help in its survival. In fact, designing to account for the sonic boom wasn’t a priority for decades, Darren Hartl, an aerospace engineering researcher at Texas A&M University, told The Daily Beast.

“The Concorde just didn’t care,” Hartl said. Hartl stated that if you fly over the ocean, no one cares about how loud the boom sounds. But then you’re stuck flying across the ocean.”

The phenomena of sonic booms have been on researchers’ radars for centuries–though observing them and understanding why they occur differ wildly in their difficulty.

Steve Miller, a mechanical and aerospace engineering researcher at the University of Florida, told The Daily Beast that a sonic boom is a system of compressing and expanding air waves that occur when an object moves faster than the speed of sound. These waves are compressed and expanded rapidly, then travel to the ground. They might sound like two claps.

“When my students ask what a sonic boom sounds like, I’ll take my fist and slam the desk as hard as I can twice,” Miller said, even though multiple air waves are to blame.

Anything moving at supersonic speed (faster than the speed of sound) can create a sonic boom, including spacecraft, aircraft, and even bullets fired from a gun. But there’s a big difference in terms of the sonic boom of a gunshot, which is created by a tiny bullet flying through the air at ground level, and that of an aircraft, which creates a continuous sonic boom at a high altitude for the duration of its supersonic flight. Miller explained that the atmosphere and weather also can refract sound waves. This affects how the sonic boom at ground level is perceived.

“When my students ask what a sonic boom sounds like, I’ll take my fist and slam the desk as hard as I can twice.”

The study of the perception of sound, known as psychoacoustics, is front and center with NASA’s X-59. This mission will reveal the threshold at which humans can hear sonic booms, opening the door to commercial supersonic flights. NASA has already begun psychoacoustic research in virtual environments even before the aircraft is available for testing. One of these is the Interior Effects Room, a noise simulator equipped with furniture and artwork on the walls. (“Literally, it’s got, like, ferns,” Hartl said. )

Participants in these sonic boom experiments fill out surveys to measure their annoyance, a metric that can depend on both the intensity of the boom and how their environment reacts to it. Miller stated that a home with fine china noises might be more annoyed by a boom than one in a factory where there is already high ambient noise. These tests, as well as ones in which an X-59 will be flown over several U.S. cities in 2024, will be used to develop a better scale for measuring the loudness and intensity of sonic booms and ultimately to set limits on these levels.

The design of the X-59 is also meant to reduce the loudness of a sonic boom–turning it into “more of a sonic heartbeat,” according to Lockheed Martin’s website. The aircraft has a slender nose to reduce drag and limit the volume of air compressed as the plane flies through; the intakes for the engines are above the plane, as these can produce their own sonic booms that would reach the ground if mounted underneath the aircraft; and the X-59 flies slower than the Concorde did to decrease the sonic boom it produces.

To be clear, even if the mission goes swimmingly, passengers won’t be able to book a ride on the X-59. Rather, it’s an experimental aircraft that may one day influence the design of commercial planes–particularly if the annoyance tests lead to limits on sonic booms’ loudness. Supersonic travel will be a business decision. That’s where another subjective quality might come into play.

“Next time you fly, look out the window at the beauty of flight, and then ask yourself, ‘What would it be like to fly supersonic?'” Miller said. “There’s definitely some magic to the whole thing.”