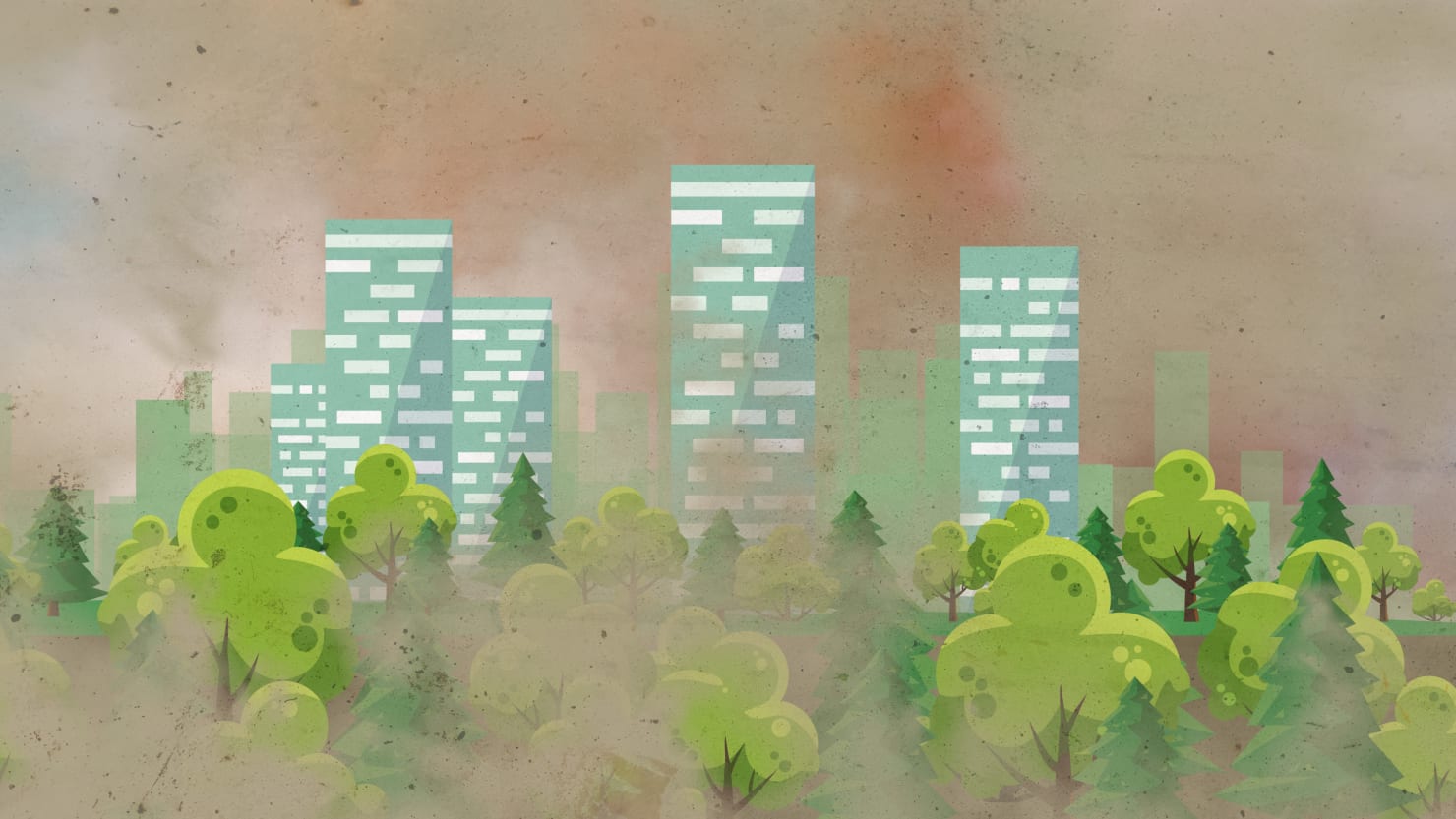 Outside the city of Karbala in central Iraq, a roughly 330 foot-wide wall of date palms and olive trees sways in the dust. Its northern axis reaches far around the city in a 16 mile-long arc. Its southern axis stretches a further 13 miles.

The trees aren’t always there, though. This natural windbreak was first proposed as a measure to protect the city’s 576,000 inhabitants in 2006. Every year, dust storms sweep through Iraq and cause chaos on the streets. They also send many people to hospitals with severe breathing problems. Some even kill. Karbala built a wall of trees to control dust storms, and filter out tiny particles from the atmosphere. These green belts are becoming more common as dust storms become increasingly severe in countries that live in dry regions. Global warming and ineffective water management have increased drought by almost a third in some areas since 2000. Drought, in turn, raises the chances of strong winds collecting sand and dust particles on their way towards inhabited areas. The Iraqi government expects the country to experience 272 days of dust annually over the next twenty years.

Addressing the cause of the issue–climate change–requires global effort. But protective windbreak structures like the one around Karbala present a possible band-aid solution. One such belt of trees around an urban area in Dubai was able to reduce airborne dust by up to 22 percent.

“You, as a human being, are the most dangerous species damaging the system by putting in solutions which are not compatible with that environment.”

“If they’re tall trees, they will absorb some of the dust in the atmosphere as it passes over,” Nick Middleton, a fellow in physical geography at the University of Oxford, told The Daily Beast. “It will get deposited on leaves and, therefore, not in the area that you’re supposedly protecting. You can use it as a sort of barrier for the dust itself.”

The tree walls help communities in other ways too. They improve air quality by acting as CO2 sinks, cool the surrounding atmosphere, provide new environments for animals to live in, and their construction brings money and jobs to low-income communities. They are also fraught with problems.

Green belts require massive funding to cover the cost of labor and the trees themselves. With Karbala’s green belt and others, those large budgets might prove too attractive for corrupted officials in some states. “You might have a big pot of money,” Middleton said. “But if someone diverts it for other things, then it’s not serving its purpose.”

In fact, engineers were never able to finish the original 47 mile plantation in the Iraqi city. Around 16 billion dinars ($11 million) were set aside for the massive project. Only nine billion ($6 million) ever made it, according to one former Karbala councilor.

Even with access to the necessary funding, the tree walls require enormous effort to maintain. China’s nearly 2,800 mile “Great Green Wall” was planted to prevent the expansion of the Gobi Desert, the world’s fastest growing desert that gobbles up 2,237 miles of grassland each year. But a lack of water has consistently hampered efforts, and only 15 percent of planted trees have survived since the start of the project.

Ali Al-Dousari is a senior researcher scientist at Kuwait Institute for Scientific Research and has been involved in several of these projects. His belief is that a natural approach would increase the chances of success. He said that the use of non-native species of plants is one of the reasons projects often fail. Because their roots have been adapted to another climate, these plants can require large amounts of water. However, native plants will thrive when they are planted in the exact same place.

“Native plants are the real solution for the future,” Al-Dousari told The Daily Beast. He said that plants are able to capture the sand and use it to stabilize the The positioning of protective tree walls could also be a factor. Previously desolate, desert areas might not provide the right environment for vegetation to survive. His home country Kuwait, for example, is attempting to grow a belt of trees near its desert border with Iraq–and he expects it to fail at a very high cost.

Green belts can even damage biodiversity. The research team discovered that trees in one plantation attracted a lot of birds of prey, including hawks and eagles. Existing populations of lizards, snakes, and foxes disappeared from the area soon after. A plantation was established on an island in Kuwait that altered the migration patterns of rare birds, which had previously laid eggs there.

” The ecosystem as a whole was affected,” he stated. “You, as a human being, are the most dangerous species damaging the system by putting in solutions which are not compatible with that environment.”

Encouraging growth in areas where vegetation might otherwise thrive, would present the best way forward, Al-Dousari said. His analysis discovered that organic matter like seeds and pollen makes up about 5 percent of particles swept up in dust storms. Growing plantations along the routes that dust storms follow might provide a solution that maintains itself.

“Once the stuff is in the air, it’s more difficult to protect yourself. It might be the case that you’d be spending your time and money more effectively by finding out wherever it’s originally coming from.”

Middleton believes success might be found closer to the source of dust storms. He said that once the dust is in the air it becomes more difficult to protect oneself. “It might be the case that you’d be spending your time and money more effectively by finding out wherever it’s originally coming from.”

Al-Dousari completed a tour of southern Iraq in January 2019 to take dust samples at different sites along the Euphrates river. He discovered two specific hotspots where up to a third of all dust blowing into Kuwait originates. He’s now attempting to collaborate with Iraq’s agricultural ministry to stabilize dust in the source areas.

“We are not doing research for the purpose of research,” he said. “We are trying to help about 40 million people affected by those two hot spots. And not only the 40 million, but also the new generations coming.”