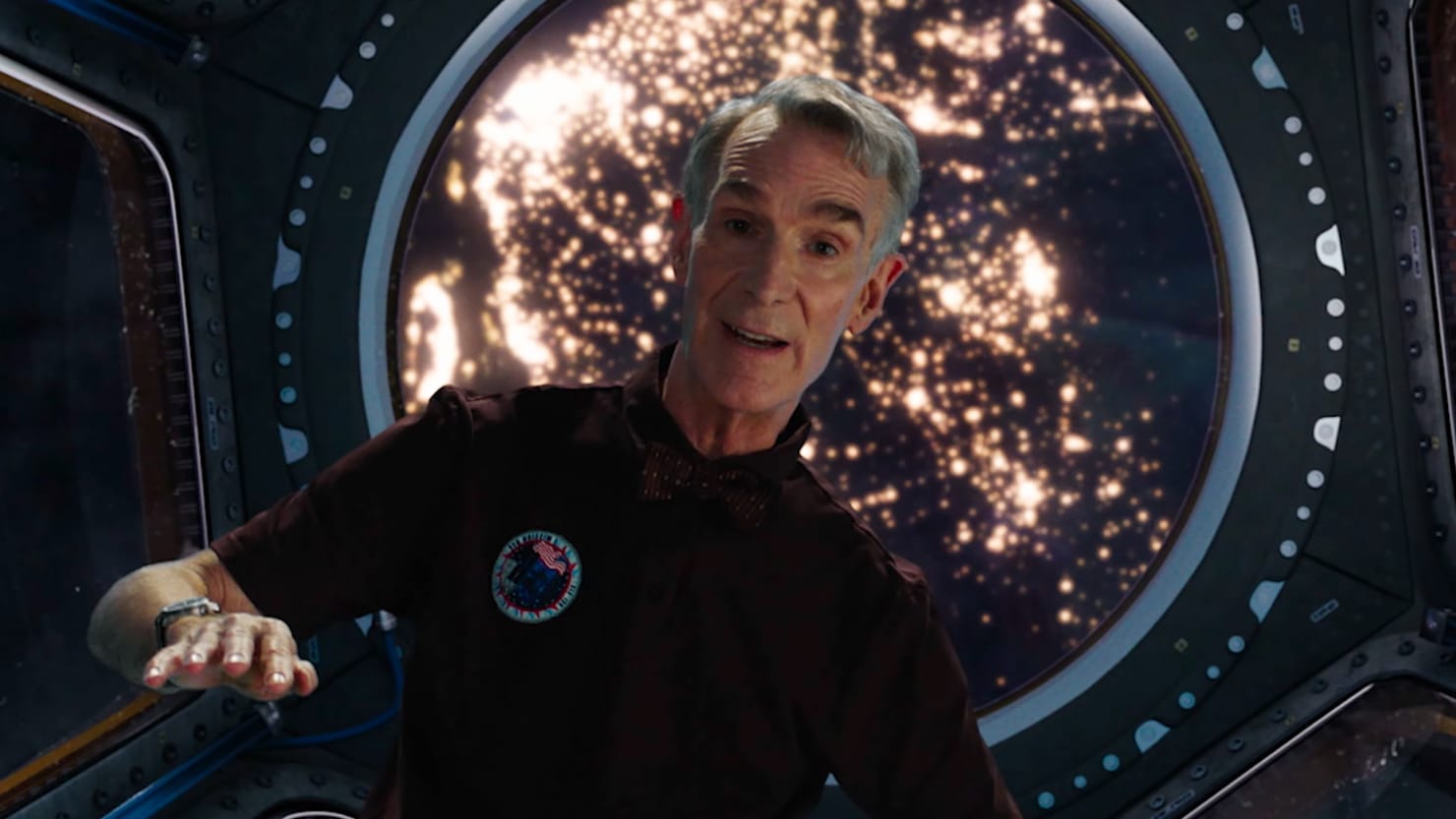 On paper, Bill Nye the Science Guy and Family Guy creator Seth MacFarlane might not seem like the most obvious collaborators. On Thursday, however, they’ll launch a new mission to save the world: The End Is Nye, a six-part docuseries debuting on Peacock that explores a handful of harrowing potential disasters. Even better? Each episode will cut through the doom and gloom with science-backed solutions we can all embrace—provided, of course, that we start electing leaders who actually value our planet.

Still, though—Bill Nye and Seth MacFarlane? How did that happen?

Speaking with The Daily Beast ahead of The End Is Nye’s premiere, Nye (the show’s on-screen star) said that he and executive producer MacFarlane share a fairly simple goal. “We made the show to save humankind,” he said during a Zoom interview, standing up theatrically to indicate he’d just provided the best possible explanation. “There—you’re welcome.”

As he sat back down, the Science Guy offered a more sincere backstory for the team-up: MacFarlane, like many of us, has been feeling pretty concerned lately about our society’s relationship to science and technology. “He wanted to do a show to get people excited—revved up,” Nye said. “He says, ‘Conservative media scare people. That’s why everybody watches them. We gotta scare people!’”

And so, Nye and MacFarlane made a handful of one-hour disaster movies. The End Is Nye’s first installment examines how our rapidly warming climate could one day produce a series of super-storms that would level nations around the globe. Another episode—the one that scares Nye the most—explores the possibility of a “coronal mass ejection,” in which electrically charged particles from the sun’s outer layer could create a magnetic field that disrupts that of planet Earth and shuts off lights around the globe.

In case it isn’t obvious, Nye said, “That would be bad.”

“We wouldn’t have this interview, for example—nor would we have any food. Nor could you drive anywhere, or keep warm, or keep cool, or do anything.”

But don’t panic. For each apocalypse scenario, Nye and MacFarlane—who, in addition to serving as EP, appears in occasional cameos—examine scientists’ proposed solutions. In the case of the above-described “CME” (coronal mass ejections) event, Nye says there are “steps we can take in our infrastructure to be ready for this thing.” (Want to learn more about them? That’s what the show is for!)

At this point, Nye is well-practiced in the art of eco-televangelism. He became the foremost science expert among children in 1993 with the massively popular syndicated series Bill Nye the Science Guy, which was nominated for 23 Emmys and won 19 of them. In 2017, he launched a program for adults on Netflix, Bill Nye Saves the World, which ran for three seasons and touched on everything from global warming to evolution to the science of aging.

As eager as many of us might be to prevent Earth from burning to a crisp, it can be hard not to get pessimistic—especially as our local billionaires seem more invested in recreational trips to the Moon than they are in saving the planet on which we all live. To Nye, the answers lie somewhere in the middle between doomerism and optimism. We need to take the problem seriously in order to solve it, he said, but it’s also hard to succeed in any endeavor if you approach it with a self-defeating attitude.

“We don’t wanna throw away water bottles—do not throw them in the ocean,” Nye said. “Do not print emails that you could just leave electric. OK—those are good things. Thumbs up. But we need big ideas.”

It’s a suggestion that can, at times, elicit eye rolls, but Nye’s advice ultimately boils down to one word: Vote.

“We need to make big changes in how we produce electricity, transmit it, and store it,” Nye continued. “We need big ideas to provide clean water to everybody. And for that, we’re gonna have to have different policies than we have now—different governance. … You can hate me. You can hate everything. You can be a miserable hater-person. But take the environment into account when you vote.”

Then again, this writer couldn’t help but wonder: Are adult voters the easier audience for this kind of content, or are kids easier to educate about the climate at this point than their parents?

“Children have no difficulty understanding the problem,” Nye said. It’s not that “grown-ups” don’t, he added; they simply tend to disagree more about the solutions. Kids, though, are an easy audience.

“What does every kid love? Space and dinosaurs,” Nye said. “And dinosaurs were wiped out, almost certainly, by an asteroid or the equivalent of an asteroid. So, we don’t want that to happen again. Kids can understand that.”

And as for the “grown-ups”? Here’s hoping The End Is Nye compels at least a good handful of them to unite around science.

The post How Bill Nye and Seth MacFarlane Teamed Up to Save the World appeared first on The Daily Beast.