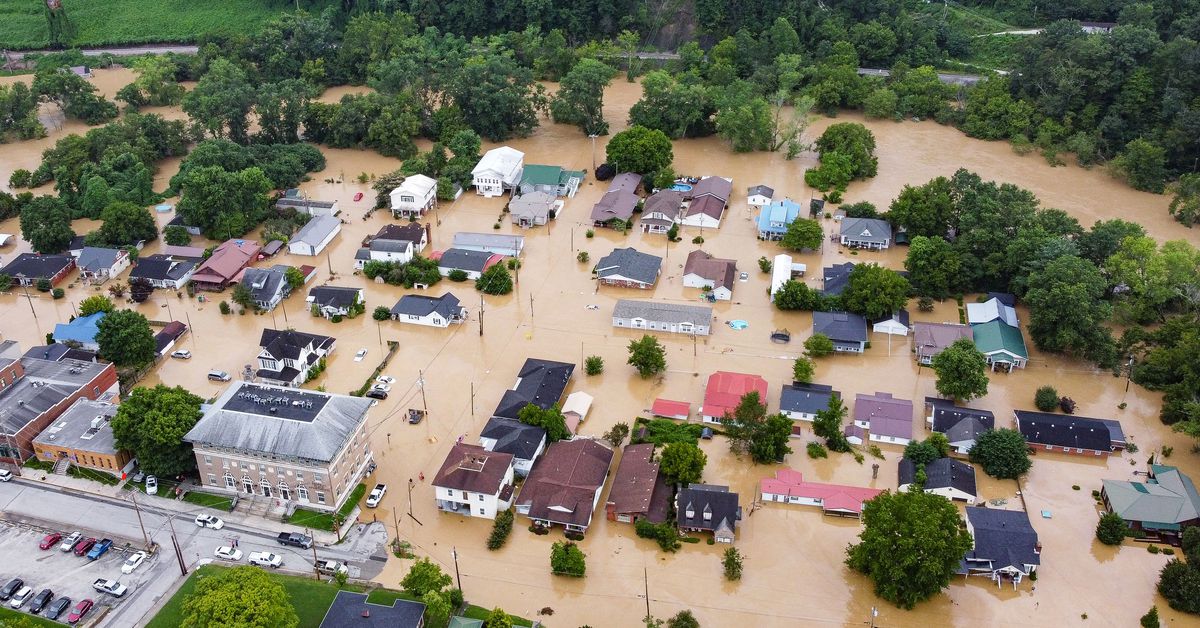 On Monday, President Joe Biden flew to eastern Kentucky to visit families affected by historic flooding that struck the Midwest in late July and early August, leaving at least 35 dead and hundreds missing. “It’s going to take a while to get through this, but I promise you we’re not leaving,” Biden said. “As long as it takes, we’re going to be here.”

About 2,000 miles away, the water in Lake Mead — the largest reservoir in the country, and a crucial water source for millions of people in the West — sat at a historic low, exacerbating a drought now in its third year. One part of the country has too much water; another has too little. These two things are related. They were also expected.

“This has been a slow-motion crisis for two decades now,” said Michael Crimmins, a climatologist at the University of Arizona. “It’s just converging at this moment.”

The short answer for why these seemingly opposite things are happening at once is that climate change is making our atmosphere thirstier. Or, in more scientific terms, as the Earth warms, its atmosphere can hold more water vapor. This happens at an exponential rate: The back-of-the-napkin math is that the atmosphere can store about 7 percent more water per degree Celsius of warming, and we’re currently at about 1.2°C above pre-industrial temperatures. The result is an atmosphere that takes longer to get saturated with water, which means fewer rainstorms, but when they do occur, those storms dump more water at once, resulting in floods.

Paradoxically, our changing atmosphere is also a perfect recipe for drought. Higher temperatures mean water evaporates faster, and when it falls, it’s less likely to fall as the snow that has historically fed many of the American West’s rivers and streams. The rain isn’t very helpful either, since lifting a drought requires a combination of snowfall and long, sustained rainy seasons instead of short, extreme bursts.

“Water infrastructure in the West is built around snowpack,” said Noah Diffenbaugh, a climate scientist at Stanford University. “It doesn’t need to be stored in a reservoir if it’s being stored in the snowpack.” Reservoirs have limited capacity, Diffenbaugh pointed out, so if an extreme rainstorm filled a reservoir beyond capacity, that water — which otherwise might have fallen as snow, or over a longer period of time — would have to be released.

Instead, we see a vicious cycle: As the soil and vegetation in drought-prone regions dry up, they become prone to wildfires and less able to retain water, so when extreme rainstorms roll in, they trigger floods and erosion. The heat makes the water dry up before it has any particular impact on the drought, and the erosion makes the soil even less able to retain water, so the next flood becomes ever so slightly worse. We saw this kind of mid-drought flooding just a week before the floods in the Midwest, when monsoon rains swept through Flagstaff, Arizona.

“There’s a real strong negative feedback loop here,” said Bill Gutowski, a professor of meteorology at Iowa State University. “Suddenly you get these compounding effects that come into play.”

Those places won’t be able to help each other out, either. The water from the West isn’t being dumped on the Midwest, and the Midwest floodwaters won’t rejuvenate the Colorado River. Instead, the same weather patterns that might have once made those places appealing to move to — the Midwest’s precipitation has, historically, been great for agriculture — is being amplified in ways that we simply weren’t prepared for.

Our built world has historically been designed around a predictable climate, and that era is over. As Vox’s Umair Irfan explained in 2018, once rare “1,000-year” weather events are becoming more and more common. “The real question is, what will it take to design and build infrastructure to protect against flooding in a changing climate?” Diffenbaugh said. “Our assumptions are obsolete.”

The answer won’t lie in infrastructure alone. The Earth will outpace us if we do not make reductions in the emissions that brought us here to begin with, wiping out any gains we might make through engineering. On this front, there is some rare good news: The Inflation Reduction Act, which passed the Senate this week, is a monumental step in the right direction. We are making our bed, rather than completely setting it on fire. Now we must learn to adapt to it.

The post How are floods and droughts happening at the same time? appeared first on Vox.