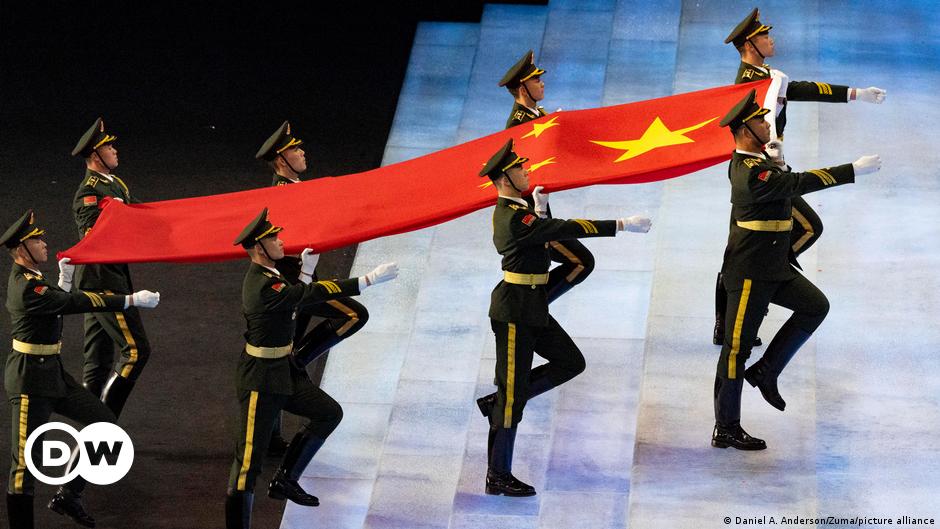 This is not a spy thriller. Therefore, we have chosen to not name any names. This story is about the ethics gray area of scientific collaboration between Germany, China.

There’s a woman physicist who specializes in theoretical particle Physics. After obtaining her Ph.D in China, she moves to Europe, initially for two years’ research at a renowned institute of nuclear physics in Italy. After that, she spends three more years at Mainz and Hamburg universities. Politically, Germany is keen to have scientific cooperation with China. The government believes it has “special significance for the long-term stability of bilateral relations.”

But what if scientific cooperation is giving the Chinese arms industry a cutting-edge?

Currently, the physicist works at a Chinese academy that is well-known for its work on nuclear weapons research. One scientist, who was a colleague of her in Germany, recalls that they were very focused on technical work. Usually not very visionary, but technically extremely well thought out. He also said that they were all extremely motivated. Instead, they collaborated on basic research — the open-ended study of theoretical, rather than applied, knowledge — the practical uses for which are not always immediately apparent. The basic research component is necessary for many purposes. Then it’s always a question of what you choose to use it for later on.”

This researcher has himself spent time at Chinese universities. The standard of scientists there has risen dramatically over the past two decades, he says. “I don’t know what specific goals China has set itself, but basic research is regarded as very strategically important. You see that everywhere.”

The China Academy of Engineering Physics (CAEP), where the physicist now works, also carries out a great deal of basic research. Above all though, this top academy is the only place where China continues to develop its nuclear warheads. The Australian China expert Alex Joske, whose research focuses on technology transfer, says the CAEP has been “involved in several cases of espionage targeting foreign nuclear technology” and is “probably one of the scariest and most concerning parts of China’s research system.”

A search for scientific publications by the physicist since she returned to China yields no results. It can be determined that she spent five years living in Europe and was then placed at CAEP through the most well-known grant program of government. China has hundreds of these. The Thousand Talents Plan is specifically aimed at top scientists working in other countries, or with considerable overseas experience. It tempts them with large budgets and modern laboratories. Some German researchers have also participated in it.

Research — in the service of the Communist Party

Under President Xi Jinping, the Chinese Communist Party has invested massively in science, so China can become the leading world power by the year 2050. The state aims to achieve this goal through “military-civilian fusion.” According to this doctrine, civilian research must also serve the People’s Liberation Army. Patriotism is a researcher’s duty.

As early as July 2013, Xi emphasized that “Science has no borders, but scientists have a motherland.” He had only been in office a few months at the time. In May 2018, he made clear in a speech to the Chinese Academy of Sciences that “Only by grasping key and core technologies within our own hands can we fundamentally guarantee national economic security, national defense security, and other securities.”

A joint investigation by 11 European media outlets, led by the investigative platforms Follow the Money and CORRECTIV, documents the importance of collaborative research with European universities to China’s plans for its own advancement. In Germany, DW, the Suddeutsche Zeitung, and Deutschlandfunk were part of the journalistic project. We discovered that German scientists have collaborated closely with colleagues affiliated with the Chinese military. Almost 350 joint studies attest this, many of them in sensitive fields like artificial intelligence and quantum science that will decide the future of warfare.

For the next stage of the investigation, DW and its partners scrutinized the publicly available data of a number of top Chinese scientists, who – like the physicist – had been in Germany for an extended period during the past 10 years; and who were conducting research in the fields of mathematics, computer science, natural sciences, and technology. With the help of the Center for Security and Emerging Technology (CSET) at Georgetown University in Washington D.C., we identified 80 people.

We then analyzed 26 particularly striking profiles in detail. These scientists are now employed at top universities which work closely with the military. 22 of them were, like the physicist, brought back via the Thousand Talents Plan. 12 of them had a fellowship from the Humboldt Foundation, a renowned state-funded body that supports academic research.

From Humboldt Fellowship to Military Commission

One of the fellows, a chemist, conducted research from 2011 to 2014 at two top research institutes in Berlin. In 2015, he went to Liverpool, England, for a further year abroad on a Marie Curie Fellowship from the European Union. Today, he is a memberof the Military Materials Technology Professional Group in the Equipment Development Department of the Central Military Commission – China’s highest national defense authority, led by President Xi. Laser technology is one of his current research areas.

Another Humboldt fellow, a plasma physicist, spent three years at the Ruhr University Bochum. In 2018, exactly one year after his return, he won a sponsorship award from the Central Military Commission. Today, his areas of specialization include artificial intelligence and aerospace propulsion. Since 2020, he has also worked for the China Aerospace Science and Technology Corporation. Its Laboratory 514, where he works, states that it is “engaged in aerospace and national defense metrology.” Metrology is the science of measurement, dealing with accuracy and calibration.

Individual cases like these are not, of course, in Germany’s interest, admits Enno Aufderheide, the secretary general of the Humboldt Foundation. Nonetheless, he believes that Germany would lose more than China were it to forgo the collaboration. It is necessary to maintain contact with the world’s brightest minds, he says. The Chinese understand Europe very well, but not as much as we do the Chinese. And that is why we do need this exchange.”

Next generation for the defense industry

Another case involves the Technical University of Munich. This was where a talented Chinese engineer conducted research for his Ph.D. After returning to China, he was rewarded by the Central Military Commission, first with an innovation award in 2019, then, one year later, with a sponsorship program. One focus of his research is the technology of thermal protection for hypersonic aircraft.

Today, the talented engineer leads at least three major projects that are directly financed by the Military Commission. He is a contact point for Ph.D. students interested in studying in Germany and two of these are designated as “important national defense project”. In an interview with a Chinese regional newspaper in the summer of 2019, he said: “I used to want to carry out the scientific research projects that I liked. Now I hope to train more people for the defense industry.”

A professor at the TU Munich, who is still in contact with the engineer, told us he knew nothing about his colleague’s connections with the military. “My topics of collaboration with Chinese colleagues have always been civilian applications of combustion research,” he said.

DW tried to reach the four Chinese scientists listed in this article several times, but were unsuccessful. Two have removed references to military service from their online resumes.

‘Don’t feed the hand that bites you’

According to the Max Planck Society, “around one third” of all scientific management positions in China today are held by people who were trained in Germany. This includes the chemist, who advances military materials research, and the engineer training the next generation of defense industry engineers.

Didi Tatlow is coauthor of “China’s Quest for Foreign Technology-Beyond Espionage.” In her book, she says that China’s openness towards visiting Chinese scientists poses a security threat. I would actually turn it around and say: Don’t feed the hand that bites you.”

Tatlow says Germany needs to question the nature of the Chinese system. Is it “something that aims to essentially supplant us, to dominate our own industries in a way that is, I think, politically risky and democratically unsafe for us?”

In Germany, the constitution prevents the government from encroaching on freedom of research. Universities choose their own partners and projects. Jens Brandenburg is the Junior Minister at Federal Ministry of Education and Research. He says, “We cannot, and do not want to,” manage all of that from Berlin. Germany’s aim, he says, is to be “as open as possible and as closed as necessary” in its scientific collaboration with China – the latter especially when it comes to dual-use projects that could also be used for military purposes.

“The Chinese have a very restricted freedom to research. We are also witnessing a strong emphasis on military and civilian-military usage ,” Brandenburg states. Brandenburg says he doesn’t believe in drawing red line. He states that although he believes in drawing lines, “It is extremely, very important for me that we absolutely respect freedom to research in Germany” and that his ministry serves as an advisory role. It raises awareness and educates.

German science confident it can deal with the challenge

But China is a “systemic rival,” not an ally. The EU and German governments see this in the same way.

German security sources have told DW and its partners that scientists live “in their own bubble,” because, for them, international collaborations “are the currency par excellence.” Research requires a lot of money – and China is also willing to invest in foreign research projects. Many universities, the sources suggest, are therefore “a bit submissive” and “a bit naive.”

Professor Katja Becker refutes this. She is the president of the German Research Foundation (DFG). “Naivete is really not the order of the day, because we are constantly reflecting on these issues,” she says. According to her, there is a lot of internal communication between universities. Critical dual-use collaborations have been thoroughly scrutinized both by scientific ethics committees and Federal Office for Economic Affairs and Export Control.

“Military research is excluded from DFG funding,” Becker stresses. DFG funding has been used to fund the technical laboratory of an outstanding German scientist, who collaborates with Chinese colleagues at China’s National University of Defense Technology. The NUDT reports directly to the Central Military Commission. It is the premier institution for scientific research for the People’s Liberation Army.

Becker points out how quickly the German scientific community reacted to the war of aggression against Ukraine. She says that all research collaboration with Russia was put on hold immediately. We learned that hope and trust are often not well founded. Unfortunately.” But she still believes that trust is needed, “if we are to address the big scientific questions facing humanity.”

China has not condemned the Russian invasion, has criticized the West’s arms deliveries to Ukraine, and ignored international economic sanctions levied against Russia. The DFG president stated that “we definitely wouldn’t break off contact with China at this time because of these; there is not reason to do so.”

It is not disputed that the vast majority of the 60,000 or so Chinese researchers in Germany simply want to study. What is a cause for concern, and a pressing political issue for Germany, is the system that coopts their research into the military plans of the Communist Party.