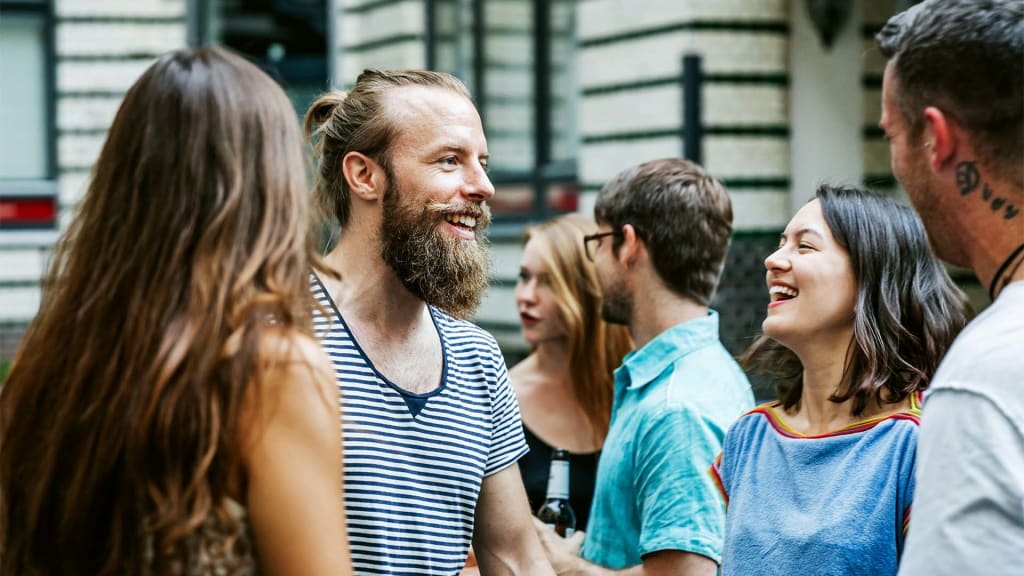 Maybe you’re like me. It’s not always simple . Sometimes it’s not. But I digress. )

What I mean is, maybe you’re a man who was clean-shaven for basically his whole life.

And maybe you decided during the early stages of the pandemic, when you were isolated from most of the world, anyway: Heck, let’s see what happens if I just stop shaving.

Now that the world is going back to the office (at least part-time), you’re trying to figure out what science says about the impressions your new look inspires.

It’s what happened to me, starting around March 2020. Itchy was gone by April. By Memorial Day it had become Grizzly Adams. By late summer, I went to my barber and said, Hey, how ’bout you help me figure this out?

I like how it’s turned out. I have to stay on top of it, because I’ve realized that probably the best look for me — the one I feel most comfortable and confident with — is when I try to make time stand still, by maintaining a perpetual state of roughly 10 to 14-day growth.

Not, “guy who got in late last night and didn’t have a chance to shave;” not, “trying to imitate Tom Hanks in Castaway,” but instead: “short beard, two weeks, might decide to shave, not sure.”

Now, I don’t know if it’s pure coincidence, or grooming serendipity, but it turns out that 10 days’ growth is exactly where science says most men should try to be in order to send the most positive messages, statistically speaking, to the people around them.

Let’s start with a study out of the University of Queensland in Australia, in which researchers attempted to determine the degree to which varying lengths of facial hair might change perceptions of men, in the eyes of heterosexual women.

Researchers collected the women’s reactions to photographs of men whose beards fell into four categories: clean-shaven, light stubble (5 days’ growth), heavy stubble (10 days growth), and thick beards (about a month’s worth of growth).

The study really broke the women’s responses into categories based on what type of romantic relationships they were looking for.

Men with clean-shaven faces were at the back of the line in all cases.

Another study out of Brazil found fairly similar results regarding gay men, according to a New York Times report; if anything, they were more attracted to men with more facial hair.

Now, I’m happily married, so as long as my wife is cool with the beard I suppose I can consider that box checked. But, I was also very interested to learn how people in social and business settings perceive men with beards, especially if there were any scientific research to back it up.

Here’s perhaps the most interesting study. Yet another group of Australian researchers (must be a thing) asked 227 people to look at photographs of men both with and without beards, and with facial expressions connoting happiness or anger. In general, study participants recognized the bearded, angry men the fastest. This led to the conclusion, that facial expressions connoting anger or seriousness give off an air of aggression and seriousness.

But, the surprise was that in a follow-up study of 450 people, in which they were asked to rate the same photos as either aggressive, masculine, and/or prosocial, they rated the happy, bearded men as higher on all three categories-including, “prosocial.”

One theory: the mere presence of a beard suggests aggression and masculinity, so the change in expression as the result of a smile or another signal of happiness results in a magnified reaction toward prosociality on the part of the other person.

Look, there are a lot of reasons why men grow beards: pandemics, sure. Maybe your religion or culture encourages them. Perhaps you simply want to imagine how it might look.

Maybe you just got traded away from the New York Yankees, and you want to let your freak fly a little.

Obviously, I’m not going to tell you whether a beard is a good idea for you or not. If you are able to grow one and you have the science to support it, that may influence your decision.

Keep it clean. I don’t think we need scientific research to know that a beard with food stuck in it doesn’t rate high on anyone’s list.

The post Here’s What Happens to Men Who Grow Beards, According to Science appeared first on Inc..