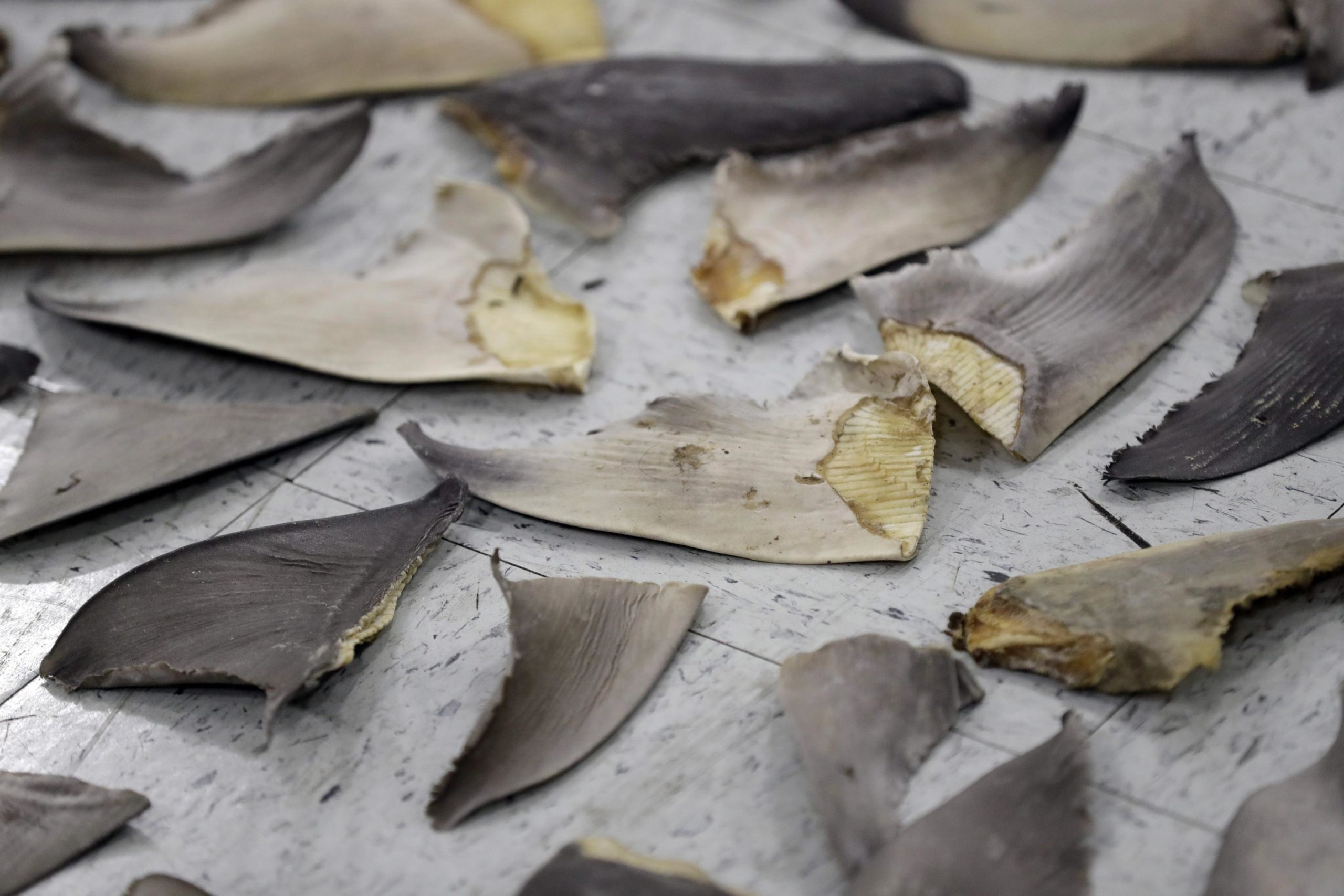 MIAMI — It’s one of the seafood industry’s most gruesome hunts.

Every year, the fins of as many as 73 million sharks are sliced from the backs of the majestic sea predators, their bleeding bodies sometimes dumped back into the ocean where they are left to suffocate or die of blood loss.

But while the barbaric practice is driven by China, where shark fin soup is a symbol of status for the rich and powerful, America’s seafood industry isn’t immune from the trade.

A spate of recent criminal indictments highlights how U.S. companies, taking advantage of a patchwork of federal and state laws, are supplying a market for fins that activists say is as reprehensible as the now-illegal trade in elephant ivory once was.

A complaint quietly filed last month in Miami federal court accused an exporter based in the Florida Keys, Elite Sky International, of falsely labeling some 5,666 pounds of China-bound shark fins as live Florida spiny lobsters. Aifa Seafood in south Florida is under criminal investigation as well for similar offenses, two sources said. The company is managed by a Chinese-American woman who in 2016 pleaded guilty to shipping more than a half-ton of live Florida lobsters to her native China without a license.

The heightened scrutiny from law enforcement comes as Congress debates a federal ban on shark fins — making it illegal to import or export even foreign-caught fins. Every year, American wildlife inspectors seize thousands of shark fins while in transit to Asia for failing to declare the shipments.

This story was supported by funding from the Walton Family Foundation. The AP is solely responsible for all content.

While not all sharks are killed just for their fins, none of the other shark parts harvested in the U.S. and elsewhere — such as its meat, jaws or skin — can compete with fins in terms of value. A single pound worth of fins, depending on which shark it is, can sell for hundreds of dollars. It’s one of the most expensive seafood products in terms of weight.

“If you’re going out of business because you can no longer sell fins, then what are you actually fishing for?,” said Whitney Webber, a campaign director at Washington-based Oceana, which supports the ban.

Since 2000, federal law has made it illegal to cut the fins off sharks and discard their bodies back into the ocean. Individual states can decide whether businesses may harvest shark fins on a dock or import from abroad.

The legislation working its way through Congress would impose a near-total ban on trade in fins, similar to action taken by Canada in 2019. The legislation, introduced in 2017 by a bipartisan group of lawmakers, has majority support in both the House and Senate.

Among those opposing the proposed ban is Elite, which has hired lobbyists to urge Congress to vote against the bill, lobbying records show.

It’s not known where Elite obtained its fins. But in the criminal complaint, the company was also accused of sourcing lobster from Nicaragua and Belize that it falsely stated was caught in Florida. The company, affiliated with a Chinese-American seafood exporter based in New York City, was charged with violating the Lacey Act, a century-old statute that makes it a crime to submit false paperwork for any wildlife shipped overseas. An Elite attorney and two Aifa representatives didn’t respond to a phone call.

Overfishing has led to a 71% decline in shark species since the 1970s. The International Union for Conservation of Nature, a Switzerland-based group that tracks wildlife populations, estimates that over a third of the world’s 500-plus shark species are threatened with extinction.

Contrary to industry complaints about excessive regulations, the U.S. is hardly a model of sustainable shark management, said Webber. She pointed to a recent finding by the National Oceanic and Atmospheric Administration that less than 23% of the 66 shark stocks in U.S. waters are safe from overfishing. It is not known what the status of over half of America’s shark stocks are.

The situation in Europe is worse. A new report by Greenpeace called “Hooked on Sharks ,”” revealed that there is evidence to support the targeting of juvenile sharks with fishing boats from Spain and Portugal. The report found that the U.S. is the world’s fourth-largest shark exporter behind Spain, China and Portugal, with exports of 3. 2 million kilograms of meat — but not fins — worth over $11 million in 2020.

Webber said rather than safeguard a small shark fishing industry, the U.S. should blaze the trail to protect the slow-growing, long-living fish.

“We can’t ask other countries to clean up their act if we’re not doing it well ourselves,” said Webber.

She stated that the laws currently in place are not enough to deter bad actors from exploiting the industry’s potential profits.

Case in point: Mark Harrison, a Florida fisherman who in 2009 pleaded guilty to three criminal counts tied to his export of shark fins, some of them protected species. He was ordered to pay a $5,000 fine and was banned from having anything to do with the shark fin trade for five years.

But federal prosecutors allege that he reconnected to associates of his former co-conspirators in 2013 in violation of the terms of his probation. He was arrested in 2020 on mail and wire fraud conspiracy charges as part of a five-year investigation, called Operation Apex, targeting a dozen individuals who also allegedly profited from drug trafficking. Prosecutors allege Harrison’s Florida-based Phoenix Fisheries was a “shell company” for individuals based in California, where possession of fins has been illegal since 2011.

As part of the bust, the Feds found documents about some 6 tons of shark fin exports and seized 18 totoaba fish bladders, a delicacy in Asia taken from an endangered species. They also seized 18,000 marijuana plants, multiple firearms and $1 million in diamonds — pointing to a criminal enterprise that transcended illegal seafood and stretched deep into the Mexican and Chinese mafia underworlds.

“This operation is about much more than disrupting the despicable practice of hacking the fins off sharks and leaving them to drown in the sea to create a bowl of soup,” Bobby Christine, then U.S. Attorney for the Southern District of Georgia, said at the time.

An attorney representing Harrison declined to speak on the matter, as it has not yet been brought to trial. Harrison, unlike his codefendants is not accused in drug-related and weapons offenses. Supporters say he has complied with all laws and is being unfairly targeted by bureaucrats overlooking the key role he played in the 1980s, when sharks were even more threatened, developing the U.S. shark fishery.

“They appear to be using the current widespread empathy toward sharks for publicity and career advancement in what would otherwise be a very routine matter,” reads a website run by supporters seeking to raise $75,000 for a “Shark Defense Fund” to help Harrison fight the charges.

“In the process, they are seeking to tarnish Mark’s reputation and deal a blow to the American shark fishery,” according to the website, which was taken down after the AP started making inquiries.

Demian Chapman, who heads shark research at the Mote Marine Laboratory in Sarasota, Florida, said that the push to ban commercial fishing of sharks could backfire.

“The U.S. will not be able to reduce international fin trade. It won’t directly impact the demand for sharks and it is likely other countries with less regulation of fisheries will fill that void,” stated Chapman.

He stated that the bill proposed by Senator Cory Booker (a Democrat from New Jersey) appears to have been driven by shark fans — and not shark fins — and people who wish to see fish species protected at the same high levels as marine mammals and turtles. According to him, few Americans are engaged in shark finning. He also said that it is possible for the U.S. to be removed from its role of a hub for fins without penalizing American fishermen.

“There’s a disconnect between perceptions and reality,” said Chapman. “In the 25 years I’ve been studying sharks, they’ve gone from demon fish to a group of species that many people want to protect. This is great but we have to support science-based management measures that address the real problems.”