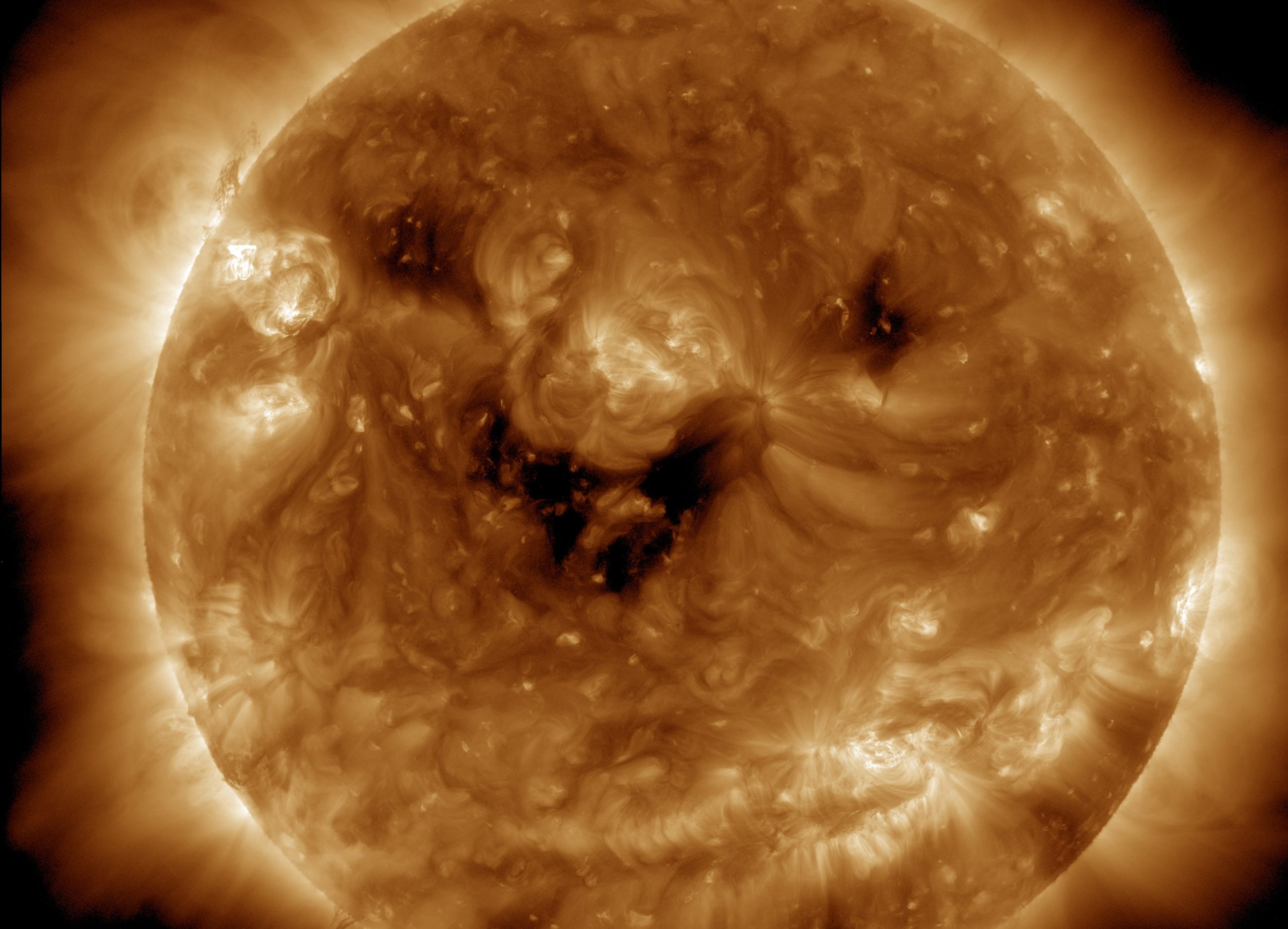 The sun has developed what appears to be a smiley face pattern in its atmosphere following Tuesday’s partial solar eclipse, giving the sun an almost pumpkin-like appearance with Halloween just around the corner.

The face-like pattern, made out of black patches against the sun’s otherwise fiery features, was discovered in an image taken by NASA‘s Solar Dynamics Observatory (SDO) spacecraft on October 26.

It is the result of the coincidence of what are called coronal hole ,, which are areas of open magnetic field in the sun’s atmosphere. These regions tend to be less dense and cooler than surrounding plasma.

Because of this temperature difference, coronal holes look darker than their surroundings when viewed using certain imaging equipment. The image below that shows the sun’s “face” was taken using the Atmospheric Imaging Assembly (AIA) on board the SDO spacecraft.

George Ho, a space physicist at Johns Hopkins University’s Applied Physics Lab (APL) told Newsweek that the smiley face image was taken using an AIA channel that captures light from solar regions at temperatures of around 1 million Kelvin, and “that’s why these cooler coronal holes show up so well. They also show up well in X-ray.”

In other AIA images of the exact same region of the sun taken at the same time but using different wavelength channels, the face shape is not visible. It is all a matter perspective, though it still happens on Halloween.

Coronal holes can actually have physical effects on Earth since they are sources of streams of charged particles that flow out of the sun and through the solar system. Charged particles from the sun form what is collectively known as solar wind, and sometimes this solar wind can interact with the Earth’s magnetic field and disturb it.

Disturbances to Earth’s magnetic field can interfere with modern technology including radio communication and power grids–a phenomenon known as a geomagnetic storm. Coronal holes rarely release streams that are intense enough to have any major effects, though.

As of Wednesday morning, the U.S. National Oceanic and Atmospheric Administration’s (NOAA) Space Weather Prediction Center had not issued any space weather alerts.