If you’re anything like me and have hundreds of thousands of files taking up terabytes of space on multiple RAID arrays and cloud services, finding specific photographs or figuring out where I might have duplicates can be an absolute headache.

While there is no shortage of RAW processing engines out there for photographers to choose from, finding the right system to sort, store, catalog, organize and backup all of the files stored on multiple devices can be an absolute nightmare. Thankfully, Mylio has made some impressive improvements catering specifically to this niche of photographers’ needs.

Revealed in the application’s recent updates, the company is taking a transformative new solution to backup and organize photos and videos of creatives by creating a private image library that securely connects all your devices into a personal network that offers several advantages over depending solely on cloud-based photo apps.

With the latest updates, Mylio Photos is able to connect to any computer, phone, tablet or iPhone, as well as online sources like Flickr, Facebook and Google Photos. This creates a centralized library of photos that can be shared with all users’ computers, mobile phones, and NAS RAID arrays. 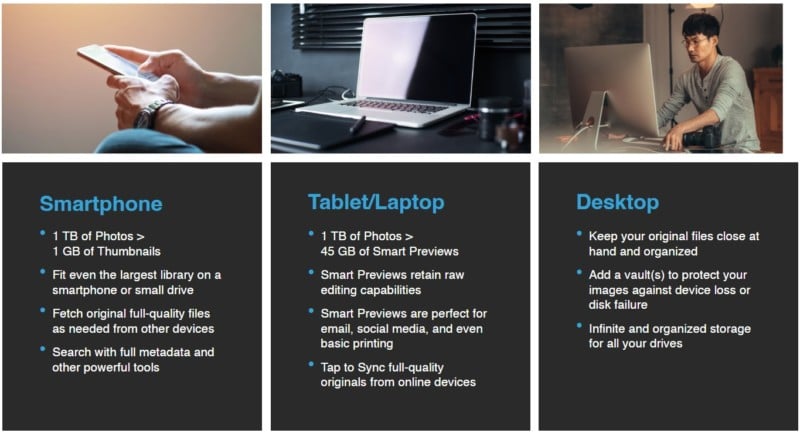 Since the system creates a “linked” library, users never have to choose what files they bring with them on their mobile devices and laptops when on the road. Mylio allows creatives to access all images and videos that they’ve added using their personal network. This secures the connection between electronic devices. The part that is important to reiterate is that Mylio isn’t offering or leveraging any cloud storage services at all, as the platform is about organizing and editing files while providing the option to connect to cloud storage platforms. These “linked” sources allow you to store all your photos in one library, which is available on any device using the Mylio Photos App. 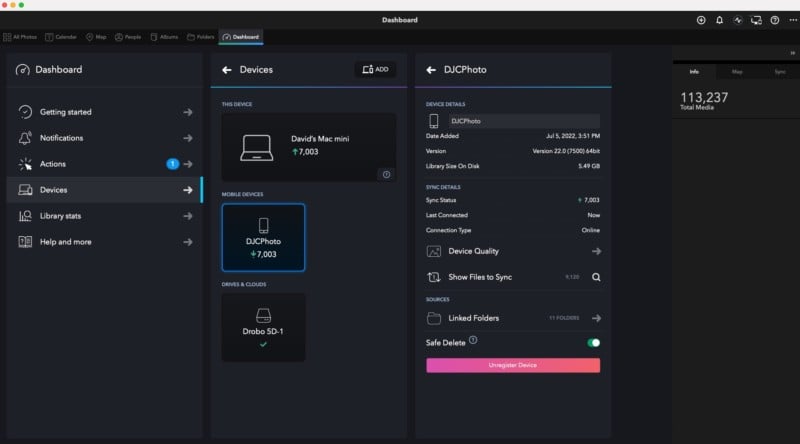 The Mylio Photos app for desktop and mobile makes it easy to fetch original or Smart Preview files as needed. You can use the standard Develop module to do on-the-fly editing. It’s easy and not-destructive. But a real bonus to Mylio Photos is seamless integration to edit your images in a plethora of external applications. Once you have selected the image that you wish to edit, you can simply click the “Open With” option under the “PHOTO” Menu. This will allow you to select from any of your existing processing apps. You can also use the Share menu on your mobile devices to connect to almost any mobile app that’s designed for photo editing, content creation, or social media. 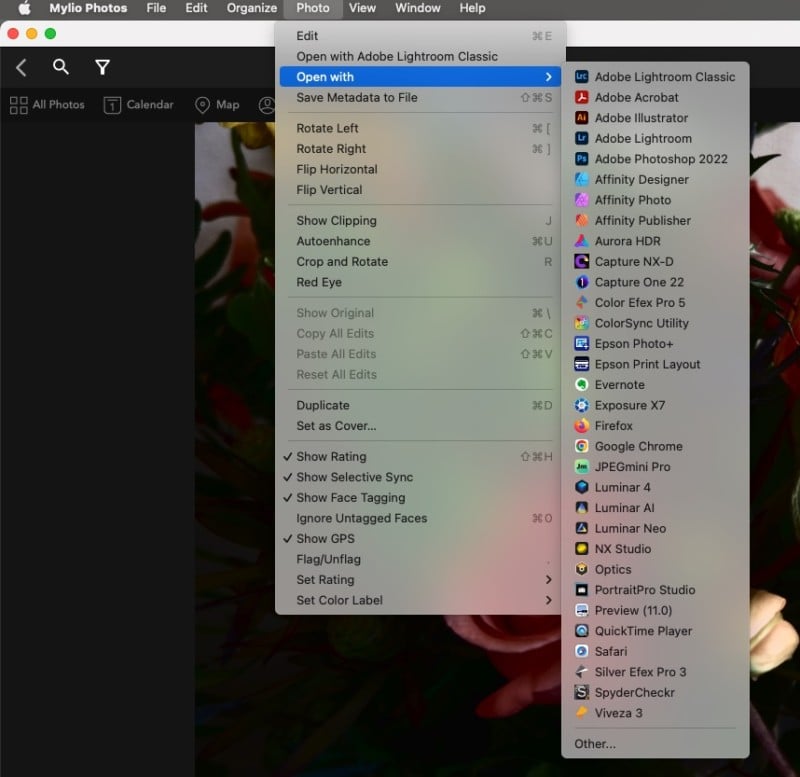 Mylio Photos doesn’t want to replace your processing tool of choice. Although the app allows users to make edits, its true strength is in the ability of the app to be used on multiple platforms, including Android, MacOS and iOS. It also helps you organize your images. Mylio Photos allows users to search, sort, share, edit, and export, but what I found most useful was the ability to easily find and remove duplicate files. 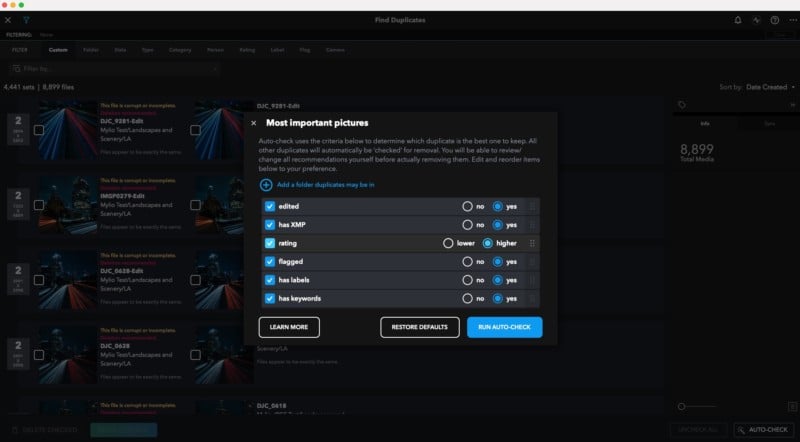 After more than a decade of professional work, I have amassed well over 30 terabytes worth of videos and images stored across multiple devices and hard drives on my home network. Due to the number and amount of drives I had, I knew there would be duplicates. However, it was impossible for me to find them.

Thankfully after adding everything to Mylio, I was able to find and sort out over 50 gigabytes of duplicate RAW and JPEG files with the system showing where each version is on each device, as well as which one was the “original” and which were copies/duplicates. The system provided a bunch of options for removing the duplicates like prioritizing the older/original files over copies freeing up a ton of space on my hard drives. Mylio Photos also allows you to combine the XMP sidecar information with the final copy when you remove duplicate files. 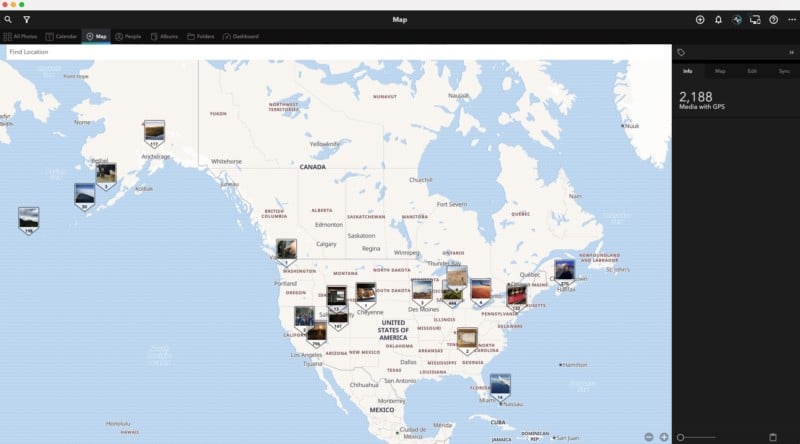 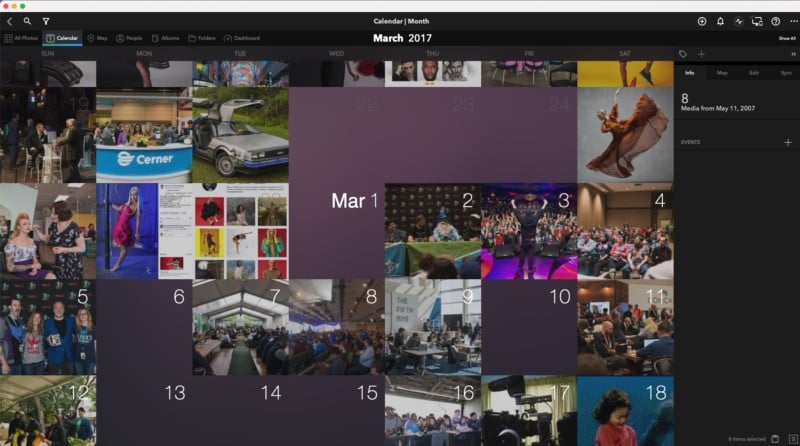 This is where Mylio shines — Managing a photographer’s entire library across all of their devices and living up to the product’s name origin by keeping “My Life Organized.” Hobbyists and professionals can use this tool to sort their entire image library (including images on Facebook, Flickr, and Google Photos) by keywords, metadata, ratings, time, geo-location, and even facial recognition. All of which runs on the local device (without need for an internet connection) and can be used by other photo apps.

Given how the system creates a smart preview and loads incredibly fast, Mylio can even be used for culling large photo sessions, making the process much smoother than from within apps like Lightroom and Capture One. Just be aware, some RAW file types (like some Hasselblad and Fuji cameras) may not be fully supported yet, requiring those systems to be shot using RAW+JPEG. Be sure to check the supported cameras and file types as the team is constantly adding support for additional cameras.