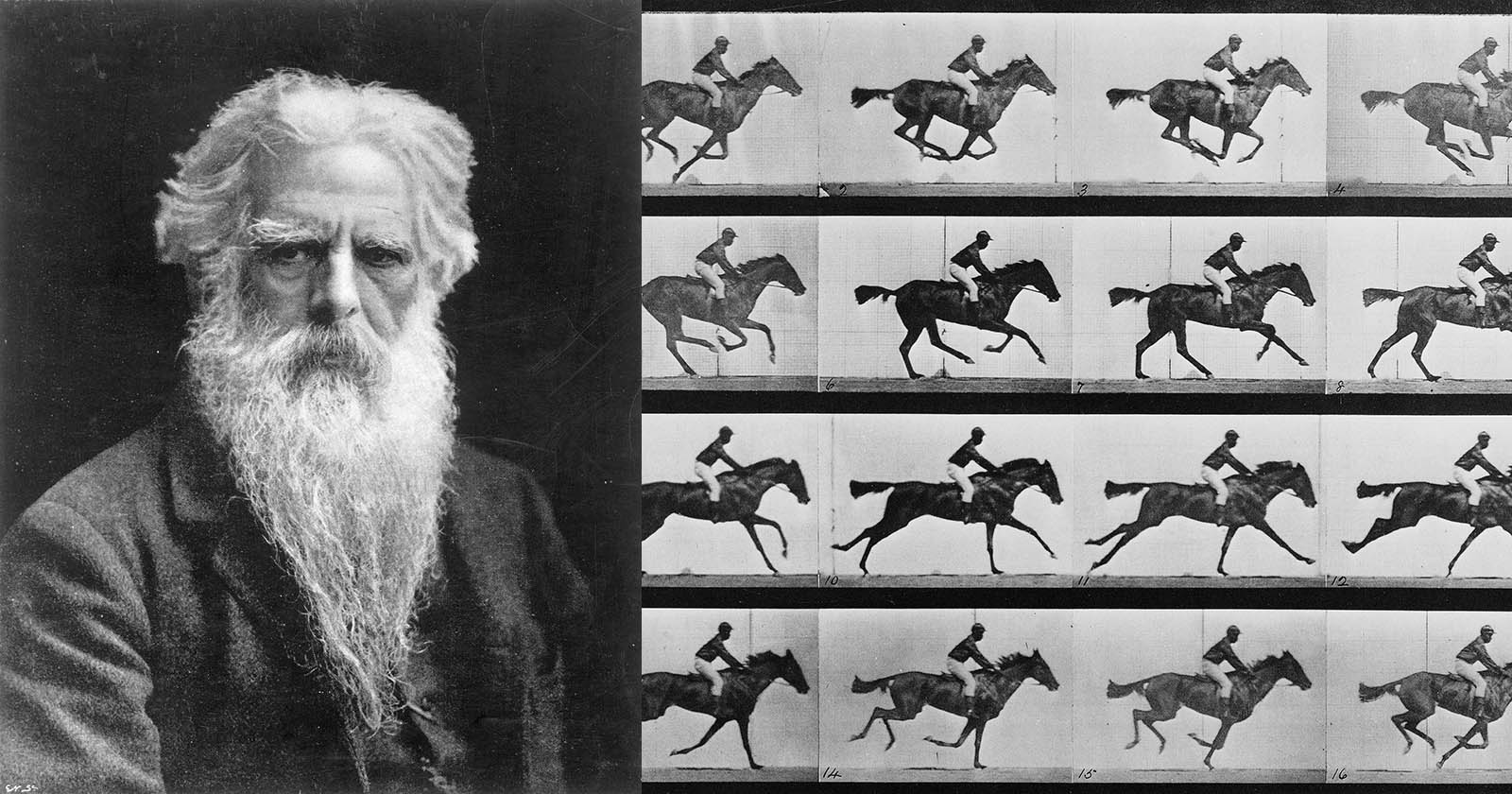 Edward James Muggeridge was born in Kingston upon Thames, a London suburb, on April 9, 1830. He changed his name several times in his early life before finally settling on the surname Muybridge from 1865 onward.

Muybridge immigrated to New York from England in his 20s and started a book import business. He soon moved on to his ultimate destination of San Francisco. He continued to import and began publishing books in San Francisco.

On one trip between California and New York, he was in a serious stagecoach accident. This was a few years before the transcontinental railroad was built, so part of the journey was by slow and dangerous stagecoaches. The driver was unable to control the horses and stage collided with the vehicle, killing at most one person and injuring many others.

Muybridge was unconscious for several days and took months to recover. Later, he claimed that his injuries had caused his hair to go prematurely grey. He looked much older because of his scraggly locks and bushy beard. People also believe that the accident caused a personality shift in him, causing him to behave erratically at times. Some evidence suggests that he was eccentric and an odd character.

A Stormy Start to a Photography Career

He also made some amazing large panoramic photos of San Francisco.

It was during this time in 1872 that he met Flora Shallcross Stone who was working as a retoucher in a photography studio where Muybridge was affiliated. She was 21 and married while he was 42. After she divorced her husband, she married Muybridge. She began an affair shortly after her marriage with Harry Larkyns, a well-known con man. The relationship between Flora and Larkyns was not secret, as Muybridge spent weeks away taking photographs.

Flora soon became pregnant with a son. The child’s paternity was never determined for sure, but the midwife, Flora, and Larkyns assumed the baby was Larkyns’s. When Muybridge found out about the affair and that the baby may not be his son, he shot and killed Harry Larkyns on October 17, 1874.

At his trial, the defense attorney used the argument “Not guilty by reason of insanity” and brought in testimony by Muybridge’s friends to prove that he was emotionally unstable. Insanity was not considered by the jury and Muybridge was acquitted on grounds of “justifiable homicide.” Flora then filed for divorce, and died five months later from typhoid flu. To let his mind clear and settle after the trial, Flora died. Muybridge took a long photographic trip to South America.

Back in San Francisco Muybridge’s photographs attracted Leland Stanford who is the President and Governor of California. Stanford was an avid horse breeder and was also a horse enthusiast. He wanted to get photographs of his horses running to determine exactly the moves they were making so he would learn which muscles needed strengthening in order to run faster.

Stanford had to complete the photo challenge because it was impossible with then-current technology to take instantaneous photos. Exposures took a lot longer than fractions of seconds and most were done in seconds. Cameras did not even have shutters, instead relying on removing the lens cap and counting for the exposure length.

Whether Eadweard Muybridge was an employee of Stanford or whether Stanford was Muybridge’s client is not clear and became a serious question later when copyright and credit disputes arose. In all likelihood, Stanford was a client, but Muybridge was not a good enough businessman to get the relationship in writing.

The working relationship was fairly close with Stanford making technical suggestions and providing engineers to help design electromagnetic shutters for the bank of 12 to 24 cameras that were to be fired in sequence as the horse ran by. Stanford funded the purchase of Palo Alto Farm for these photos.

Muybridge spent a good deal of his time traveling and giving lectures about the procedure and amazing audiences with the pictures of horses in motion. While he was in Europe on a lecture tour, Stanford published a book called “The Horse in Motion” without giving any credit or even mentioning Eadweard Muybridge. Muybridge was furious, but Stanford apparently believed that Muybridge was just another employee, not worth mentioning.

Paving the Way for Motion Pictures

In 1879, Muybridge invented the zoopraxiscope, a device that used a round disc to project sequential images in quick succession. He used it extensively in his travels and lectures, thrilling audiences with the moving pictures.

Muybridge called on Thomas Edison at his shop in New Jersey with the idea of using Edison’s phonograph to synchronize with the images from the zoopraxiscope, but the phonograph was not loud enough to be used in the large lecture halls where Muybridge was speaking and projecting images. It would be a few more decades and electronically amplified sound before sound movies would be a reality.

It was around this time that George Eastman had invented a machine to coat a photographic emulsion on flexible film. It was this link that made possible the movie camera/projector.

With Edison aware of Muybridge’s zoopraxiscope, he was likely working on a way to improve it to be used with his own inventions. Thomas Edison patent the movie projector quickly without crediting Muybridge. This effectively prevented Muybridge’s income and credit.

While moving from a spinning disc to a longer piece of film was certainly a significant improvement, Edison shouldn’t get all the credit for creating the movie projector using historical data from Muybridge.

After a lengthy legal battle and losing friendships with Leland Stanely and other associates from San Francisco who testified to his insanity to save him from being hanged, Muybridge agreed to continue the project with humans and other animals. The University of Pennsylvania agreed to an arrangement, basically a research grant, which would allow Muybridge to use university property, some interns as helpers, and art students as models to advance his work.

The university’s interests were primarily research, especially medical, trying to understand how the human body moves and works. Muybridge knew that models must be nuded to reveal the muscle used for different activities. The controversial aspect of this project was the one that nearly saw the entire project cancelled. The University of Pennsylvania project took place from 1884 through 1885.

At the Columbia Exposition in Chicago in 1893, Muybridge was able to secure space to build a theater to show his moving pictures and sell his books. The world’s first movie theatre was built this way. Apparently, the theater was not a financial success because he didn’t renew the six-month lease and sailed back to England in 1894.

He left his zoopraxiscope and the “Animal Locomotion” negatives to the Kingston Borough that now has them on display in the local museum along with a large panoramic print of San Francisco.

For further reading, a great book on the life and impact of Eadweard Muybridge, and a primary source used for this article, is The Man Who Stopped Time by Brian Clegg.