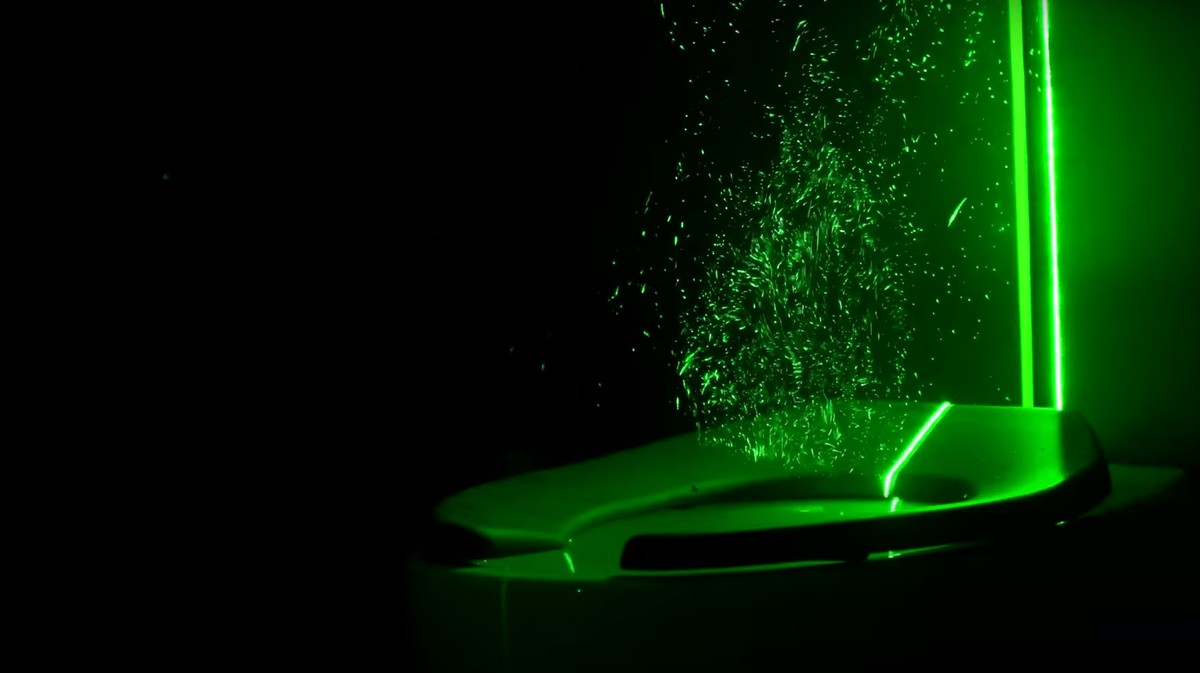 Most of us never think twice about our daily trips to the bathroom, but new footage of the airborne particles that erupt out of a toilet after a flush—illuminated in barftastic detail by laser light—might just haunt you forever.

The video offers an unprecedented (and unholy) look at the plumes that rise out of lidless toilets, like those found in most public restrooms, after a flush. Scientists led by John Crimaldi, a professor of engineering at the University of Colorado Boulder, designed the experiment to investigate how rapidly these particles move, and how long they linger in the air, which is crucial information for ensuring sanitary conditions and combating the spread of disease.

Crimaldi and his colleagues discovered that these toilet plumes exhibit “strong jet-like behavior,” and that their flow through space is “surprisingly energetic and chaotic,” according to a study published on Thursday in Scientific Reports. And if that isn’t enough yuck for you, consider that some of these particles can remain floating in the air for minutes after the flush, just waiting to be inhaled by passers-by.

“Aerosols can transmit infectious diseases including SARS-CoV-2, influenza, and norovirus,” Crimaldi and his colleagues said in the study. “Flushed toilets emit aerosols that spread pathogens contained in feces, but little is known about the spatiotemporal evolution of these plumes or the velocity fields that transport them.”

“Using laser light to illuminate ejected aerosols we quantify the kinematics of plumes emanating from a commercial flushometer-type toilet, and use the motion of aerosol particles to compute velocity fields of the associated flow,” the team added. “The toilet flush produces a strong chaotic jet with velocities exceeding 2 m/s; this jet transports aerosols to heights reaching 1.5 m within 8 seconds of initiating a flush. Quantifying toilet plumes and associated flow velocities provides a foundation for future design strategies to mitigate plume formation or to disinfect pathogens within it.”

While the research is certainly noteworthy for its “ick factor,” as Crimaldi put it in the accompanying video, it could also help researchers develop “future design strategies to mitigate human exposure through plume formation, disinfect pathogens carried by the plume, and enhance plume removal through ventilation,” according to the study.

It is also excellent motivation to keep the lid down when you flush, assuming your toilet has one, lest you become immersed in a cloud of poopy particles that might carry disease. Now, let us never speak of this again.

The post Don’t Watch This Video If You Ever Want to Flush In Peace Again appeared first on VICE.