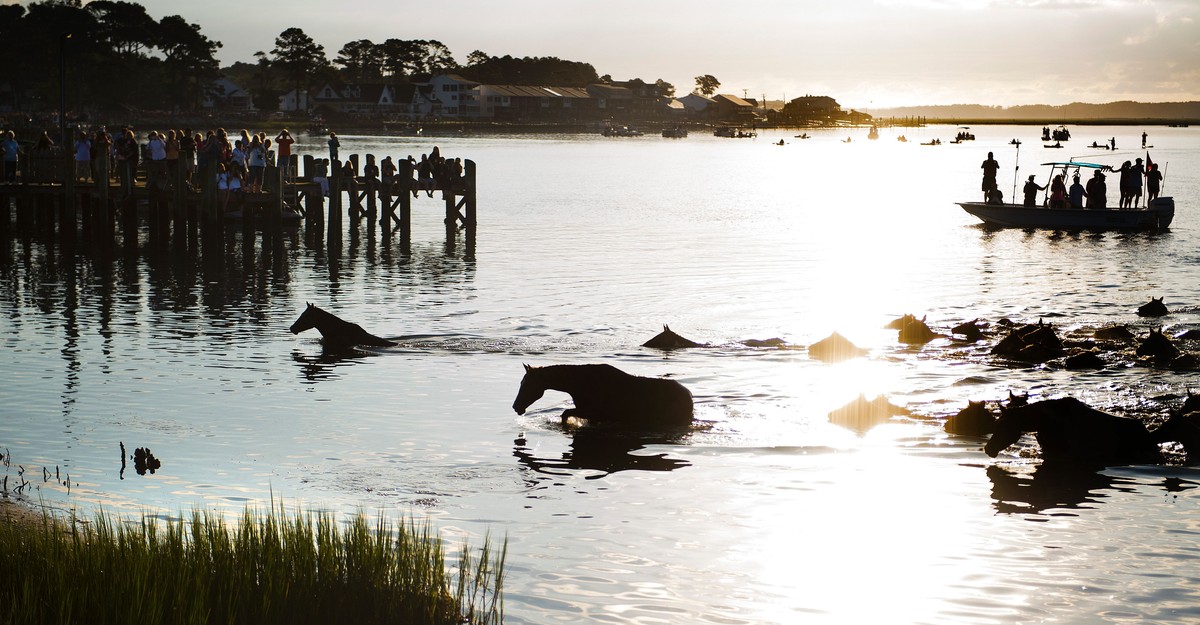 To tell the story of how a purported cow tooth dug up in the Caribbean might corroborate the mythical origin of wild horses off the coast of Maryland and Virginia, let us begin, naturally, with a children’s book, Misty of Chincoteague.

If you know, you know–horse girls, I’m looking at you. For everyone else: This beloved 1947 children’s novel tells the story of Misty the pony, born on the beaches of an uninhabited barrier island. The story is fictional, but the setting is real. Today, a band of wild horses roam the island eating seagrass. They also ignore tourists looking for photos with Misty.

No one knows how the horses first arrived there, but Misty of Chincoteague retells a dramatic bit of local lore. It opens with literal Sturm und Drang. A Spanish galleon carrying Moorish ponies to the gold mines of Peru shipwrecks off the coast of what will later become Maryland and Virginia. Crew perish, but ponies survive by swimming to an island nearby. The book says that “The seasons came an went” and the ponies adapted to the New World. Today, the Chincoteague Volunteer Fire Company, which manages the southern half of this horse population for historical reasons, promulgates the shipwreck origin story of the island ponies. The National Park Service, which manages the northern half, tells a decidedly less romantic tale: 17th-century settlers probably brought these horses with them.

Enter now the “cow” tooth, actually a horse tooth, mistakenly cataloged decades ago by archaeologists excavating an abandoned 16th-century Spanish settlement. Surprisingly, an recent DNA analysis indicates that this Spanish colonial horse’s modern cousin is the Chincoteague pony. Given the genetic similarity, could the myth be real after all–were these mysterious ponies also Spanish colonial horses that first arrived by shipwreck?

Nicolas Delsol is a Florida Museum of Natural History postdoctoral researcher. He was finishing his dissertation on the “cow tooth” problem. He was interested in cattle domestication in the Americas, and the museum’s collections contained hundreds of cow teeth from Puerto Real, a 16th-century Spanish settlement in modern-day Haiti. Delsol picked 24 to analyze DNA from and–just his luck–one tooth had sequences that looked really, really weird. It was left aside while he worked on his cattle project. He finally returned to the tooth and discovered that the DNA sequence of the Chincoteague pony was the same. Delsol, who is French, had never heard of it. “I was like, Wait, what are they exactly? What are these Chincoteague ponies?”

Because this tooth was buried at a well-documented site in a Spanish city that existed only from 1503 to 1578, archeologists are pretty sure the Spanish brought this horse to Puerto Real. And given its similarities in DNA, the Chincoteague pony seems likely, too, to have some Spanish ancestry. But Delsol and his co-authors are careful not to extrapolate much more. DNA alone cannot prove that horses survived a shipwreck. (Other writers have identified a 1750 Spanish shipwreck that they claim is a plausible origin event.) An alternative explanation, Delsol told me, could be that the Spanish brought horses with them while exploring the mid-Atlantic coast in the 16th century. This history is less well known than Spanish incursions farther south and west, but there are still remnants of Spanish forts in the Carolinas. Perhaps the ancestors of the Chincoteague ponies came on a journey to one of these settlements.

Wherever the first horses on the island came from, though, the horses that live there today are not exclusively descended from them. These horses have been interbred repeatedly with other horses. In the 1920s, for example, Shetland ponies were introduced to the island to add pinto coloring to the herd. And in 1975, after large numbers of horses fell ill with swamp fever, the sausage magnate Bob Evans donated mustangs to help the Chincoteague population recover. “They’re of widely mixed ancestry,” says E. Gus Cothran, an emeritus professor at Texas A&M University who studied the island population using older methods back in the 1990s. That work, he says, also “strongly supports that there is some Spanish influence.” But whether that Spanish influence came from shipwrecked horses, other horses brought by the Spanish, or residual Spanish ancestry in horses interbred with the original Chincoteague ponies is difficult to disentangle. The question of “how did they get there?” is difficult to answer. Delsol only examined mitochondrial DNA from the horse tooth. This is more easily extracted from old degraded samples, but it is not passed through the maternal line. It gives an incomplete picture of one’s ancestry. Cristina Luis from the University of Lisbon, who studies horse genetics, said that it is difficult to reconstruct a whole story using one single sample.

This sample does add to a growing body of horse DNA that lays out the larger, more sweeping history of horses. The ancestors of horses today actually evolved in North America and likely crossed the Bering Strait into Eurasia, where they were first domesticated. About 10,000 years ago, however, equines went extinct in the Americas for reasons unknown. Horses were once more common in the Americas after the arrival of the British, French and Dutch settlers. American horses are today a mixture of horses from different countries, much like Americans. Feral mustangs in the American West, for example, Cothran told me, were originally the descendants of Spanish horses. As American settlers began to move westward, more horses with Northern European heritage were brought along. Today’s mustangs are a mix of many lineages. Luis explained to me that when you tell the story of the horse breeds of the past, it is also telling the story of the movement of humans around the world. Indeed, however the first Chincoteague ponies arrived in America, their story is entwined with events in human history.

Still, we humans can’t help but attach more epic stories to horses. Kristen Guest is an English professor at University of Northern British Columbia. She has come across several shipwreck stories in her research. For example, one of the famous Clydesdale ancestors was an Arabian horse, which was shipwrecked in order to swim to Scotland. She said that she didn’t believe it was accidental that the stories keep coming up in different places. “There’s something about the idea that these ordinary little horses have this romantic history.” We romanticize our own past too. “Human beings, when they imagine their genetic history–nobody imagines their ancestors dug ditches,” Guest said. We’d rather imagine ourselves as descendants of Charlemagne.

For Delsol, this has all been a rather fascinating detour through the history of horses. He’s still trying to get the cattle research from his Ph.D. work published. But, he admitted, “I don’t know if it’s going to draw as much attention as Chincoteague ponies.”

The post Does DNA Prove the Mythical Origins of These Wild Horses? appeared first on The Atlantic.