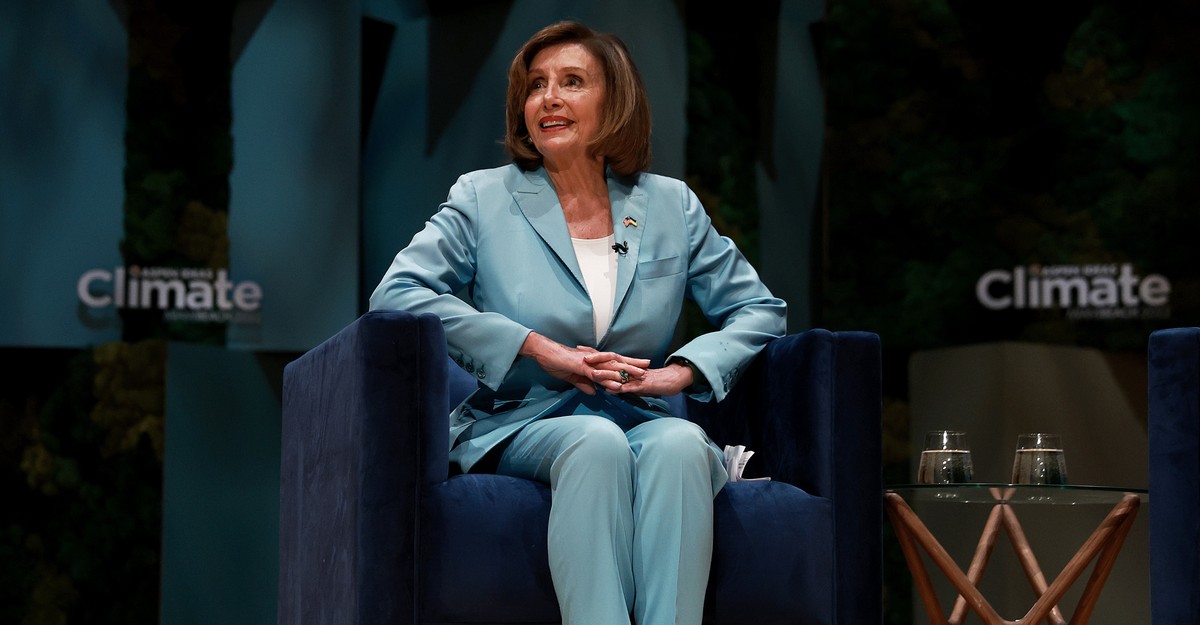 MIAMI BEACH, Fla.–On Monday night, I saw one of the most despair-inducing performances about the hope of climate action that I’ve witnessed in years.

Nancy Pelosi was the House speaker. She spoke at the Aspen Ideas Climate Festival in Miami Beach, to talk about the progress of congressional Democrats on climate change. Her remarks were more effective as a litany of missed opportunities. Susan Goldberg was recently editor-in-chief of National Geographic. She is now an Arizona State University dean. Pelosi almost shrugged when she asked if Democrats would pass climate legislation. The House has already passed a roughly $2 trillion bill containing President Joe Biden’s climate priorities, she said. It was now in the hands of Senate. The House could pass the bill if they were able to send it back to her.

Missing was any sense that this legislation is a make-or-break moment for the broader Democratic caucus. Gone was any suggestion that if Democrats fail to pass a bill this term, then America’s climate commitment under the Paris Agreement will be out of reach, and worse heat waves, larger wildfires, and damaging famines across the country and around the world within the next decade and a half will be all but assured.

Aside the Helen Lovejoyesque appeal ,, it is actually wrong. Climate action was “for the children” in the 1990s. “We’re not doing this for the children,” Kate Larsen, an energy analyst at the Rhodium Group, told me after the event. We’re doing it for ourselves!” Already, heat waves that are hot enough to kill human flesh have been occurring this month. They will continue to occur over the next decade and may even be repeated every year. Unbearable droughts, sea-level rise so large as to break levees, and unpredictable famines will characterize life. Most of the world’s coral reefs, including the Great Barrier Reef, will undergo bleaching every few years, meaning the water will be so hot that the coral will eject their symbiotic microorganisms into the water, starving themselves in the process.

The speech seems to have punctuated the decline of climate politics in the last year. Biden said that climate change was one of four major, overlapping crises in the United States during the campaign. Yet his administration seems to be sleepwalking toward inaction. After the White House refused to reduce Biden’s Build back Better bill , Senator Joe Manchin (a Democrat from West Virginia) killed it five months ago. Since then, Democrats have been stuck in limbo, with Manchin laying out some of his terms for a replacement bill, and Democrats neglecting to put together a new bill reflecting those terms. It now seems likely that Democrats will lose control of Congress with only a bipartisan infrastructure bill to show for their trouble. Then, they will face overwhelming odds. Because of the geographic apportionment of their supporters, Democrats can win 51 percent of votes cast in the 2022 and 2024 elections and still lose eight Senate seats. I have heard estimates that the party must win eight points more than Republicans to pick up a Senate seat. If inflation does not drop, this outcome is almost impossible. This will leave Democrats in the minority for many years. Republicans, by contrast, have a plausible path to more than 60 seats, allowing them to pass legislation over that institution’s filibuster.

At the same time, the Biden administration could soon lose its ability to regulate climate change at all. The Supreme Court could restrict the Environmental Protection Agency’s ability to regulate greenhouse gases this term. It could also curtail Chevron deference, a legal doctrine that gives executive agencies more freedom to operate when the underlying law is unclear. In the past, both concepts have been central to Democratic climate-rule making. Both could be gone by 2023. When reminded about this grim outlook, climate activists point to both corporate action and stock markets, which seemed to be heading in the right direction. During the 2010s, most oil companies failed to turn a profit, validating activists’ demands that institutions should divest of fossil-fuel stock. The markets have changed since the outbreak of the pandemic. Oil-company stocks are some of the best performing of the past year. The recent market rout has also hurt funds that focus on ESG (or “environmental. social. governance”). This vague category covers topics such as a company’s carbon footprint and how many women are on its boards. At another conference here last month, the libertarian venture capitalist Peter Thiel attacked ESG as “a hate factory” and compared it to the “Chinese Communist Party.” This week, he backed a fund that would take intentionally anti-progressive stances.

Historically, progressives haven’t been too fond of ESG either, seeing it as a form of Wall Street greenwashing (or worse). But on climate, specifically, it has worked in their favor, allowing managers to take a less-than-direct approach to shareholder value and push forward money-losing initiatives.

What all of this means is that, the next time a climate-skeptical president takes office, advocates will have fewer tools to constrain their behavior than last time. And they will have no future to point to: If Democrats couldn’t pass a climate bill in 2009 or 2022, why should anyone have any hope that they’ll try to do it again, or be able to?

Since 2017, a surge of global concern–much of it triggered by revulsion at President Trump and the Intergovernmental Panel on Climate Change’s 1. 5 Celsius report–signaled a new era of climate action. This tide is receding. The American climate activists may not have much to prove their claims.

The post Democrats Are Sleepwalking Toward Climate Disaster appeared first on The Atlantic.