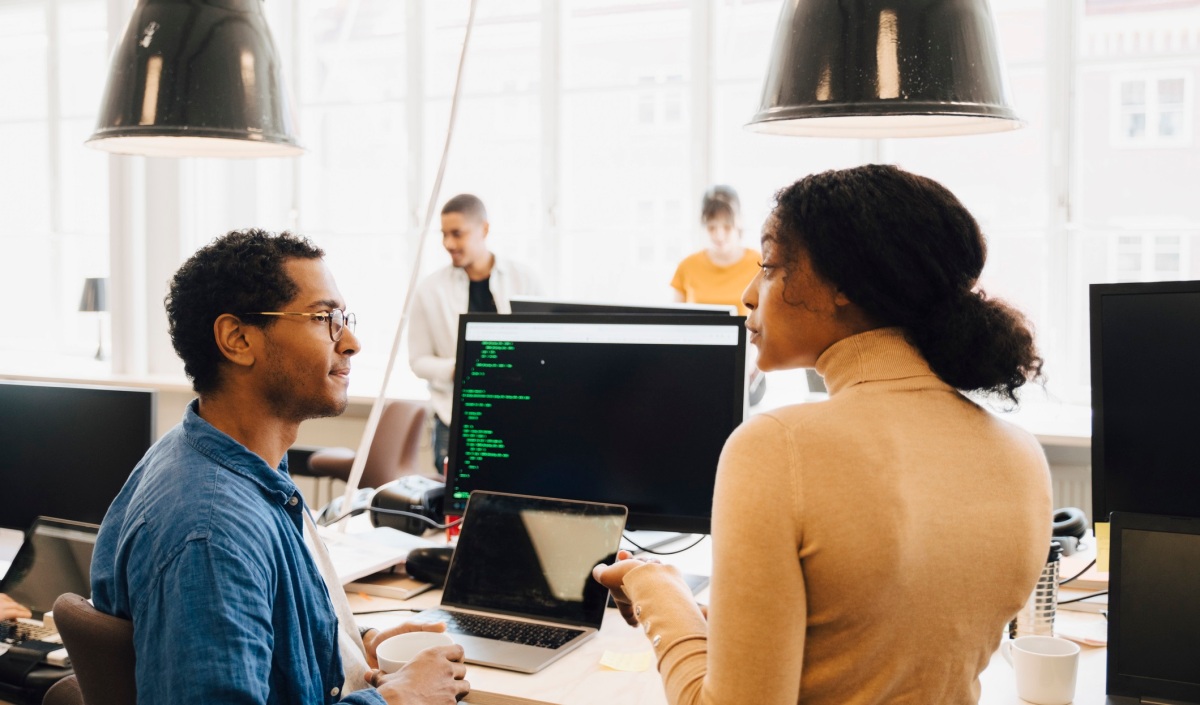 The fields can be similar and overlap in many aspects. Software engineers can do some data science, or be required to engineer the software.

But there are also key differences, and the roles are diverging. Data scientists are responsible for finding answers from the streams of bits. The software engineer’s job is to keep the machines running along the way.

For example, a software engineer may construct the integrations by which real-time economic, weather, foreign currency, social media and other data is brought into an enterprise’s data operations. The data scientist may write the algorithms by which that data is used to inform product demand and supply forecasts within the organization.

That’s a simple summary. Here’s a list of key ways that the jobs are similar and different.

Also read: What is data science?

Data scientists and software engineers create instructions for computers and in many cases, the work is very similar. A large portion of the job of a data scientist is to collect information and prepare it for analysis. The filtering, cleaning and classification is often the largest part of the job and this work is not much different from some of the software engineering that’s done in many large systems. Software must collect input and filter it before it can make any decisions.

This part of data science is a subset of computer science and software engineering.

A good data scientist will have the ability to gather and filter large amounts of data. This is because it requires the same skill set as managing a production line, creating games or printing copies.

Both revolve around data organization

Enterprises increasingly rely on databases, data warehouses and data lakes to store and integrate massive flows of data gathered from internal and external sources. Both data scientists and software engineers rely on them. Much of their work focuses on organizing and using these resources.

Once the data is gathered and prepared, the work diverges. Data scientists have extensive training in statistical and mathematical techniques. They understand how scientists have developed these mechanisms to make sense from data gathered in labs and experiments over the years. They are responsible for applying these methods and mechanisms to solve larger business problems.

While some of the work of data scientists is to write software to prepare the data, much of this work uses tools and systems like databases or data pipelines that are already available. These systems can be relied upon to work smoothly and efficiently, as they have been designed by software engineers.

Software engineers are trained not just to write code but to ensure that it runs correctly, quickly and efficiently. Because they are able to see how the best decisions regarding the software architecture can pay off, and create software that solves big problems.

Data scientists focus on the information

The main goal of data science is to find useful information that can guide us to the right answers. Data scientists have the job of finding that information and analyzing it until an answer may appear. Often, machine learning (ML) is involved in extracting constantly refined results from very large datasets.

Along the way, data scientists need to do plenty of software engineering but that is not their main focus. When the software layers work correctly, which can sometimes seem more like a fantasy than reality, data scientists can concentrate on the data.

Software engineers focus on the infrastructure

The reason the computers exist in the first place is to organize the data. The software engineers are mostly devoted to keeping the machines and their various software layers running smoothly. Writing this code, debugging it and then tweaking it so it works effectively is their job. Others are responsible for the data flowing through machines.

While their analysis can target any part of an enterprise, including obscure areas like the parameters for a manufacturing process, often a big part of data scientists’ job is helping the enterprise think strategically about the long term. Data science is one of the best tools to help managers understand how well a business is performing. These metrics can often be the best way to gain objective insights about all sections of a business.

Data scientists are crucial in the design of these metrics. They ensure that accurate information is available. They are expected to work with the team making strategic decisions.

Much of the work of software engineers is designing and maintaining a software stack. Although the task is not physically as tangible as overhauling an engine or designing a new one, software engineers are often more tactical. From tweaking the user interface to watching for bottlenecks, the job is very interactive and dominated by finding the best practices to deliver functionality.

This isn’t to say that it can’t be strategic. Software engineers will need to create long-term plans for the evolution of the code base. They’ll need to plan for changes in the workload and ensure the software is able to support them. This planning is crucial for startups, as all the company’s value lies in their stack. But when this architectural work is done, it’s time to implement the ideas, and that requires more tactics.

Data scientists use many algorithms in their analysis, but lately some of the most exciting options have involved artificial intelligence (AI) and machine learning (ML). They can use patterns learned from training data to apply these patterns repeatedly to other examples. They are often used to classify and categorize data, which can often lead to automation and greater efficiency. An AI model might automatically send a sales representative if certain details indicate that a customer may be close to buying. AI and ML algorithms can be used to enhance the organization’s workflow.

Artificial intelligence is starting to become important for software engineers

While artificial intelligence and machine learning are important technologies that are in great demand, they aren’t as important to software engineering as they are to data science. Much of the work of software engineers involves careful programming and testing to eliminate bugs and solve problems with the most efficient combination of hardware and software possible. It requires attention to details and thorough testing.

However, this may be changing. Software engineers have discovered that machine-learning algorithms are able to spot opportunities that can increase efficiency and that human beings sometimes overlook. Algorithms can also identify anomalies or issues that require greater attention. Artificial intelligence routines are being used by some developers to assist them in writing software. In the future, software engineers may become some of the most devoted users of AI and ML.

The work of writing and maintaining software stacks has grown to be such a large endeavor that school is often the last time a software developer creates something all their own. Many software engineers work with teams numbering in the hundreds. Many of them work with large codebases they can’t read in full. Some are even working with code they didn’t know existed. Much of the work is not so much creating the code as testing it and reviewing it to make sure the code base is as consistent as possible. All of this means that software development is a process that requires teamwork and cooperation.

Many projects in data science are new enough and small enough that they can be managed by a small team or even an independent data scientist. That isn’t to say that scientists work alone. The questions that drive the science come from the larger enterprise and the answers will be used by others in the organization to drive change. The fact is that data scientists are often an additional role driven by managers.

This is slowly changing as data science becomes integrated into the business’ workflow. As the existing tools are improved and extended, there will be fewer greenfield data science projects.

In recent years, many companies have built increasingly elaborate and automated data science tools. Although much of the original work involved writing software to filter and clean data, many companies have developed new tools that automate this task. Sometimes these complex pipelines can be created completely using no-code tools and drag-and-drop interfaces. This requires little to no hands-on effort. These integrated tools are opening up the discipline to new people who lack traditional software skills. Now management teams themselves can often build data pipelines that answer most if not all of their questions.

It’s not that better tools haven’t revolutionized the world of software engineering. The march of progress has created entire systems that automate many of the routine tasks that occupied the minds of software engineers just a few years ago. The job’s scope and size are so vast that new problems often arise that need to be coded.

This is changing. There’s been a rise of tools that offer “low-code” or “no-code” development. While their capabilities are often overpromised by marketing teams, there’s some work that can be accomplished with little or no traditional programming. That means that software engineering teams can spend less time on traditional tasks. It’s also opening up the work to those with more business-side skills than computer-focused knowledge.

Both require attention to detail

Those who devote themselves to either data science or software engineering must pay careful attention to the workflow. To ensure valid conclusions, the information should be collected in a timely fashion. The information should also be stored so it can be retrieved in order to complete unfinished work.

The software engineer should be able pay the same attention to all information flows throughout the system. Some information might need to be documented in greater detail than others — for instance, a record of clicks on a mouse may be more important — but all interactions should be managed carefully so the software can be responsive and user-friendly.