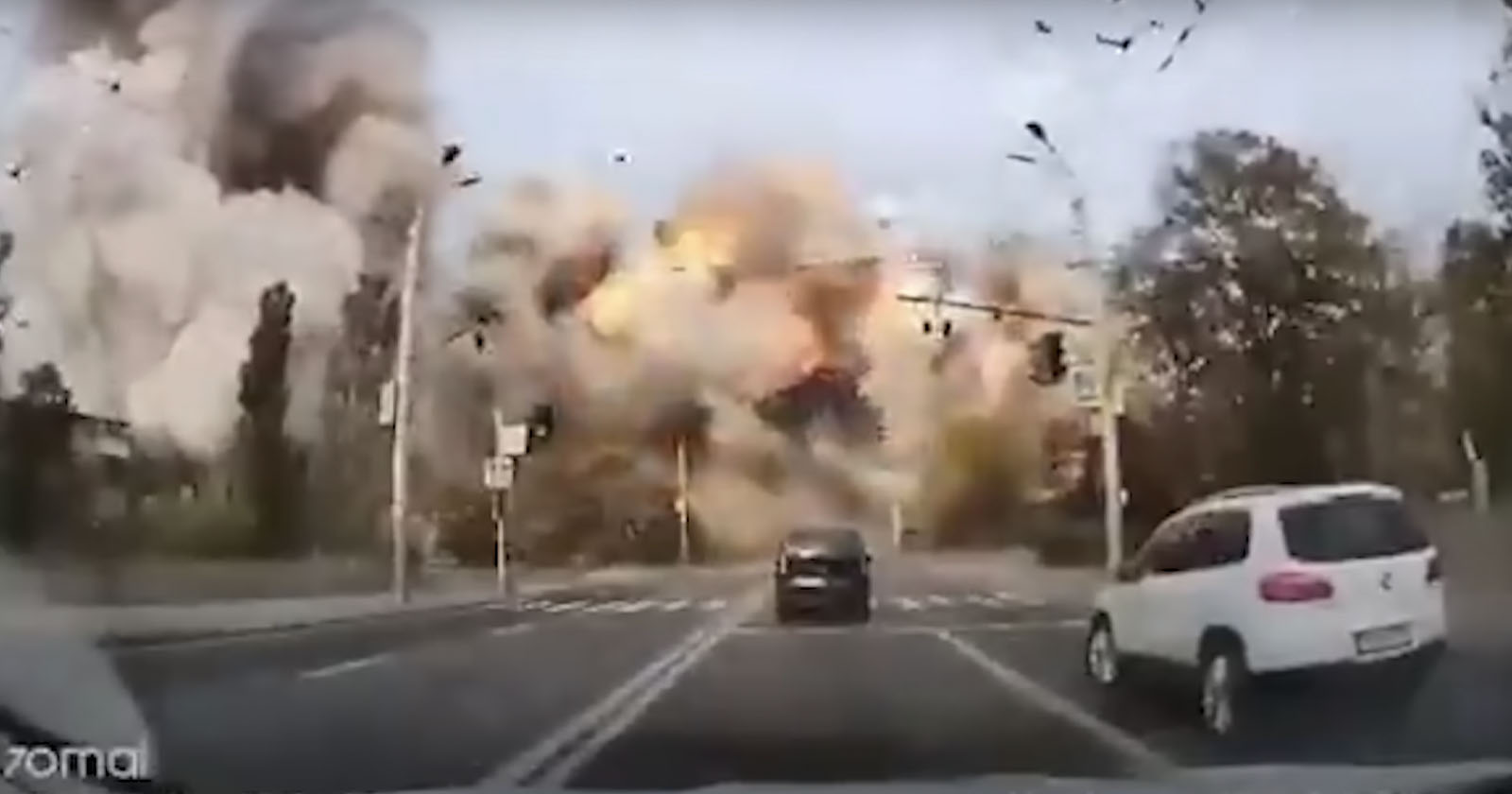 Terrifying footage of Russia’s indiscriminate missile campaign in Ukraine has been caught on dashcams across the country. The attacks are revenge for the Kerch Bridge explosion that connects Crimea to Russia.

The haphazard bombing that took place on Monday and Tuesday this week, has seen Ukraine’s capital Kyiv hit for the first time in months.

Dashcam footage, seen above, taken by a driver in Lviv, a major city close to the Polish border, shows a Russian missile striking an electrical power station.

The attack hit the city’s power supply with Reuters reporting that some areas were without power for 48 hours.

Meanwhile, in the eastern Ukrainian city of Dnipro, further dashcam footage (above) showed a missile attack followed by a huge explosion that the fortunate driver was lucky to avoid. The unknown driver was heading toward the bomb site as it exploded in front of them, they promptly turned around and sped from the scene.

Russian President Vladimir Putin accused Ukraine of attacking the Kerch Bridge in Russian-occupied Crimea. The bridge is strategically important for the Russian Army.

Putin promised a “harsh response,” and Ukrainian president, Volodymyr Zelensky, condemned the attacks, accusing Russia of intentionally targeting civilian infrastructure. “They deliberately chose such a time, such goals, in order to cause as much harm as possible,” he says.

However, Putin’s attacks have had a limited impact with many missiles failing to hit plausible targets and the strikes will further deplete Moscow’s dwindling supply of long-range missiles, according to Reuters.

“Russia lacks the missiles to mount attacks of this sort often, as it is running out of stocks and the Ukrainians are claiming a high success rate in intercepting many of those already used,” writes Lawrence Freedman, emeritus professor of war studies at King’s College London.

“This is not therefore a new war-winning strategy but a sociopath’s tantrum.”

Both sides say the attack was on a huge scale, unseen at least since Russia’s initial wave of air strikes on the first night of the war in February.

Each Kalibr cruise missile is estimated to cost more than $6.5 million, meaning Moscow fired around half a billion dollars worth of missiles on Monday alone.

Western military analysts have no firm figures for how many missiles Russia has left, but for months have pointed to indicators suggesting the supply is limited.