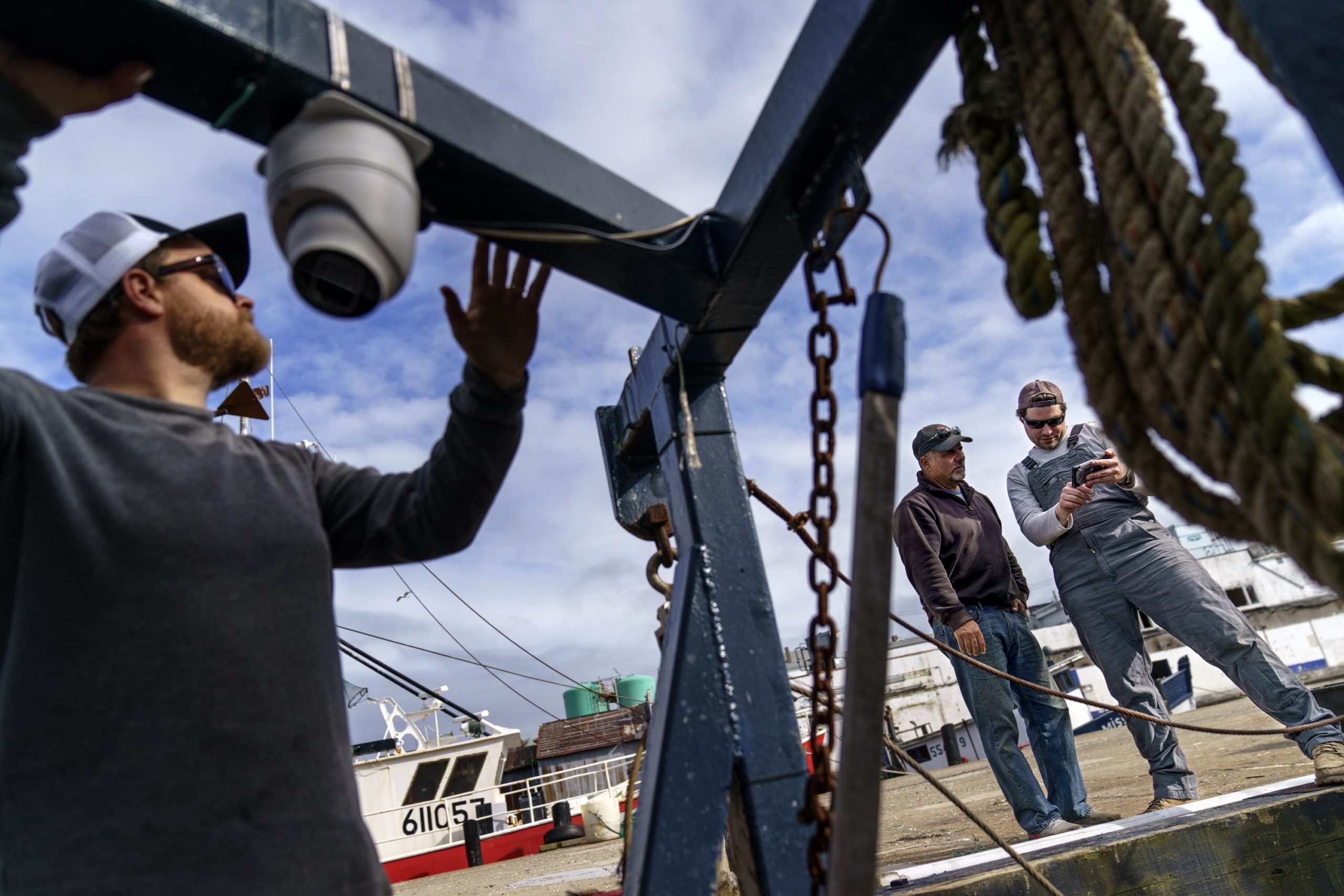 PORTLAND, Maine — For years, Mark Hager’s job as an observer aboard New England fishing boats made him a marked man, seen as a meddling cop on the ocean, counting and scrutinizing every cod, haddock and flounder to help set crucial quotas.

On one particularly perilous voyage, he was met on the dock at 4 a.m. by a hostile captain cleaning his AK-47 assault rifle. And for the next 12 days at sea, no crew member even uttered a single word to him.

Now Hager is working to replace such federally-mandated observers with high-definition cameras affixed to fishing boat masts. From the safety of his office, Hager uses a laptop to watch hours of footage of crew members hauling the day’s catch aboard and measuring it with long sticks marked with thick black lines. And he’s able to zoom in on every fish to verify its size and species, noting whether it is kept or flung overboard in accordance with the law.

“Once you’ve seen hundreds of thousands of pounds of these species it becomes second nature,” said Hager as he toggled from one fish to another.

Hager’s Maine-based start-up, New England Maritime Monitoring, is one of a bevy of companies seeking to help commercial vessels comply with new U.S. mandates aimed at protecting dwindling fish stocks. It’s a brisk business as demand for sustainably caught seafood and around-the-clock monitoring has exploded from the Gulf of Alaska to the Straits of Florida.

But taking the technology overseas, where the vast majority of seafood consumed in the U.S. is caught, is a steep challenge. Only a few countries can match the U.S.′ strict regulatory oversight. And China — the world’s biggest seafood supplier with an ignominious record of illegal fishing — appears unlikely to embrace the fishing equivalent of a police bodycam.

The result, scientists fear, could be that well-intended initiatives to replenish fish stocks and reduce bycatch of threatened species like sharks and sea turtles could backfire: By adding to the regulatory burdens already faced by America’s skippers, more fishing could be transferred overseas and further out of view of conservationists and consumers.

This story was supported by funding from the Walton Family Foundation and the Pulitzer Center on Crisis Reporting. The AP is solely responsible for all content.

“The challenge now is getting the political will,” said Jamie Gibbon, an environmental scientist at The Pew Charitable Trusts who is leading its efforts to promote electronic monitoring internationally. “We are getting close to the point where the technology is reliable enough that countries are going to have to show whether they are committed or not to transparency and responsible fisheries management.”

To many advocates, electronic monitoring is something of a silver bullet.

Since 1970, the world’s fish population has plummeted, to the point that today 35% of commercial stocks are overfished. Meanwhile, an estimated 11% of U.S. seafood imports come from illegal, unreported and unregulated fishing, according to the U.S. International Trade Commission.

To sustainably manage what’s left, scientists need reliable data on the activities of the tens of thousands of fishing vessels that ply the oceans every day, the vast majority with little supervision.

Traditional tools like captain’s logbooks and dockside inspections provide limited information. Meanwhile, independent observers — a linchpin in the fight against illegal fishing — are scarce: barely 2,000 globally. In the U.S., the number of trained people willing to take underpaid jobs involving long stretches at sea in an often-dangerous fishing industry has been unable to keep pace with ever-growing demand for bait-to-plate traceability.

Even when observers are on deck, the data they collect is sometimes skewed.

A recent study by the National Oceanic and Atmospheric Administration found that when an observer was on deck New England skippers changed their behavior in subtle but important ways that degraded the quality of fisheries data, a phenomenon known as “observer bias.”

“The fact is human observers are annoying,” Hager said. “Nobody wants them there, and when they aren’t being threatened or bribed, the data they provide is deeply flawed because it’s a proven fact that fishermen behave differently when they’re being watched.”

Enter electronic monitoring. For as little as $10,000, vessels can be equipped with high-resolution cameras, sensors and other technology capable of providing a safe, reliable look at what was once a giant blind spot. Some setups allow the video to be transmitted by satellite or cellular data back to shore in real time — delivering the sort of transparency that was previously unthinkable.

“This isn’t your grandfather’s fishery anymore,” said Captain Al Cottone, who recently had cameras installed on his 45-foot groundfish trawler, the Sabrina Maria. “If you’re going to sail, you just turn the cameras on and you go.”

Despite such advantages, video monitoring has been slow to catch on since its debut in the late 1990s as a pilot program to stop crab overfishing off British Columbia. Only about 1,500 of the world’s 400,000 industrial fishing vessels have installed such monitoring systems. About 600 of those vessels are in the U.S., which has been driving innovation in the field.

“We’re still in the infancy stages,” said Brett Alger, an official at NOAA charged with rolling out electronic monitoring in the U.S.

The stakes are especially high in the Western and Central Pacific Ocean — home to the world’s largest tuna fishery. Observer coverage of the Pacific’s longline fleet, which numbers around 100,000 boats, is around 2% — well below the 20% minimum threshold scientists say they need to assess a fish stock’s health. Also, observer coverage has been suspended altogether in the vast region since the start of the coronavirus pandemic, even though the roughly 1 billion hooks placed in the water each year has barely ebbed.

“Right now we’re flying blind,” said Mark Zimring, an environmental scientist for The Nature Conservancy focused on spreading video monitoring to large-scale fisheries around the world. “We don’t even have the basic science to get the rules of the game right.”

The lack of internationally-accepted protocols and technical standards has slowed progress for video monitoring, as have the high costs associated with reviewing abundant amounts of footage on shore. Hager says some of those costs will fall as machine learning and artificial intelligence — technology his company is experimenting with — ease the burden on analysts who have to sit through hours of repetitive video.

Market pressure may also spur faster adoption. Recently, Bangkok-based Thai Union, owner of the Red Lobster restaurants and Chicken of the Sea tuna brand, committed to having 100% “on-the-water” monitoring of its vast tuna supply chain by 2025. Most of that is to come from electronic monitoring.

But by far the biggest obstacle to a faster rollout internationally is the lack of political will.

That’s most dramatic on the high seas, the traditionally lawless waters that compromise nearly half the planet. There, the task of managing the public’s resources is left to inter-governmental organizations where decisions are taken based on consensus, so that objections from any single country are tantamount to a veto.

Of the 13 regional fisheries management organizations in the world, only six require on-board monitoring — observers or cameras — to enforce rules on gear usage, bycatch and quotas, according to a 2019 study by the Paris-based Organization for Economic Cooperation and Development, which advises nations on economic policy.

Among the worst offenders is China. Despite boasting the world’s largest fishing fleet, with at least 3,000 industrial-sized vessels operating internationally, and tens of thousands closer to home, China has fewer than 100 observers. Electronic monitoring consists of just a few pilot programs.

Unlike in the U.S., where on-water monitoring is used to prepare stock assessments that drive policy, fisheries management in China is more primitive and enforcement of the rules spotty at best.

Last year, China deployed just two scientists to monitor a few hundred vessels that spent months fishing for squid near the Galapagos Islands. At the same time, it has blocked a widely backed proposal at the South Pacific Regional Fisheries Management Organization to boost observer requirements

“If they want to do something they definitely can,” said Yong Chen, a fisheries scientist whose lab at Stony Brook University in New York hosts regular exchanges with China. “It’s just a question of priorities.”

Hazards faced by observers are highest outside U.S. waters, where electronic monitoring is used the least. Sixteen observers have died around the world since 2010, according to the U.S.-based Association for Professional Observers.

Many of the deaths involve observers from impoverished South Pacific islands working for low pay and with little training and support — even when placed on American-flagged vessels that are subject to federal safety regulations. Such working conditions expose observers to bribery and threats by unscrupulous captains who themselves are under pressure to make every voyage count.

“It’s in our best interest to have really professional data collection, a safe environment and lots of support from the (U.S.) government,” said Teresa Turk, a former observer who was part of a team of outside experts that in 2017 carried out a comprehensive safety review for NOAA in the aftermath of several observer fatalities.

Back in the U.S., those who make their living from commercial fishing still view cameras warily as something of a double-edged sword.

His Day Boat Seafood in 2011 became one of the first longline companies in the world to carry an ecolabel from the Marine Stewardship Council — the industry’s gold standard. As part of that sustainability drive, the Fort Pierce, Florida, company blazed a trail for video monitoring that spread throughout the U.S.’ Atlantic tuna fleet.

“I really believed in it. I thought it was a game changer,” he said.

But his enthusiasm turned when NOAA used the videos to bring civil charges against him last year for what he says was an accidental case of illegal fishing.

The bust stems from trips made by four tuna boats managed by Day Boat to a tiny fishing hole bound on all sides by the Bahamas’ exclusive economic zone and a U.S. conservation area off limits to commercial fishing. Evidence reviewed by the AP show that Taylor’s boats were fishing legally inside U.S. waters when they dropped their hooks. But hours later some of the gear, carried by hard-to-predict underwater eddies, drifted a few miles over an invisible line into Bahamian waters.

Geolocated video footage was essential to proving the government’s case, showing how the boats pulled up 48 fish — swordfish, tuna and mahi mahi — while retrieving their gear in Bahamian waters.

As a result, NOAA levied a whopping $300,000 fine that almost bankrupted Taylor’s business and has had a chilling effect up and down the East Coast’s tuna fleet.

When electronic monitoring was getting started a decade ago, it appealed to fishermen who thought that the more reliable data might help the government reopen coastal areas closed to commercial fishing since the 1980s, when the fleet was five times larger. Articles on NOAA’s website promised the technology would be used to monitor tuna stocks with greater precision, not play Big Brother.

“They had everyone snowballed,” said Martin Scanlon, a New York-based skipper who heads the Blue Water Fishermen’s Association, which represents the fleet of around 90 longline vessels. “Never once did they mention it would be used as a compliance tool.”

Meanwhile, for Taylor, his two-year fight with the federal government has cost him dearly. He’s had to lay off workers, lease out boats and can no longer afford the licensing fee for the ecolabel he worked so hard to get. Most painful of all, he’s abandoned his dream of one day passing the fishing business on to his children.

“The technology today is incredibly effective,” Taylor said. “But until foreign competitors are held to the same high standards, the only impact from all this invasiveness will be to put the American commercial fishermen out of business.”

AP Writer Caleb Jones in Honolulu, Hawaii, and Fu Ting in Washington contributed to this report.