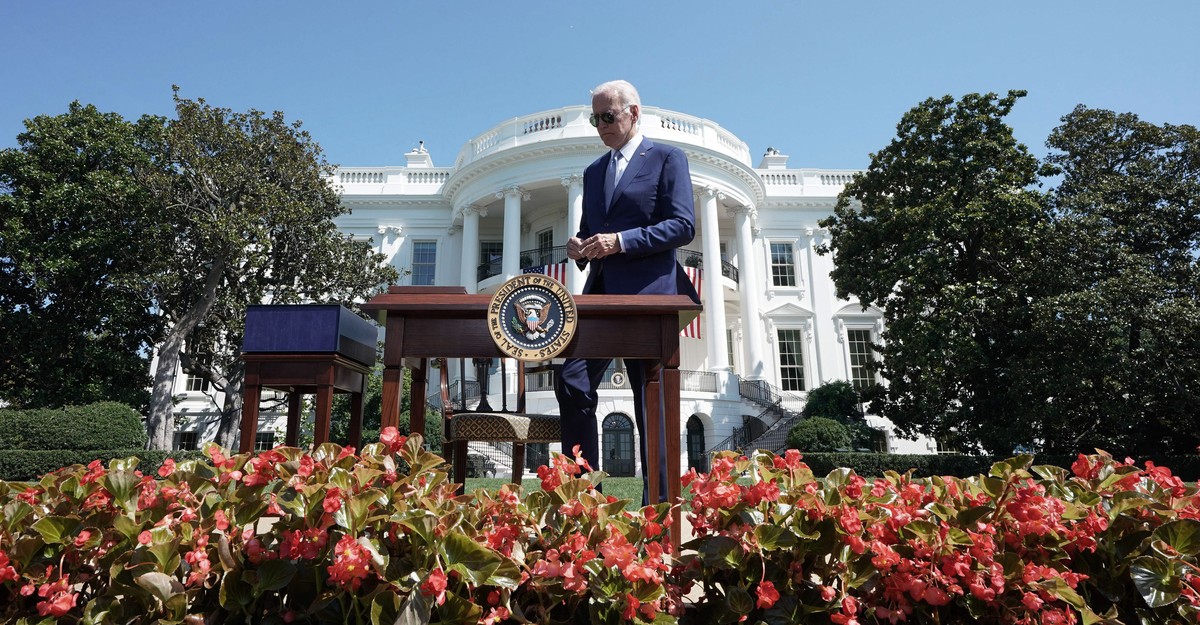 Yesterday, President Joe Biden signed into law one of the most significant investments in fighting climate change ever undertaken by the United States. The new act will boost efforts to manufacture more zero-carbon technology in America, establish a new federal office to organize clean-energy innovation, and direct billions of dollars toward disaster-resilience research.

No, I’m not talking about the Inflation Reduction Act, the landmark Democratic climate and taxes bill that passed the Senate on Sunday along party lines. I am referring to The CHIPS and Science Act ..

Since it sailed through Congress last month, the CHIPS Act has mostly been touted as a $280 billion effort to revitalize the American semiconductor industry. The law, which also funds new technologies and research in combating climate change, has received far less attention.

Over the next five years, the CHIPS Act will direct an estimated $67 billion, or roughly a quarter of its total funding, toward accelerating the growth of zero-carbon industries and conducting climate-relevant research, according to an analysis from RMI, a nonpartisan energy think tank based in Colorado.

That means that the CHIPS Act is one of the largest climate bills ever passed by Congress. It exceeds the total amount of money that the government spent on renewable-energy tax credits from 2005 to 2019, according to estimates from the Congressional Research Service. And it’s more than half the size of the climate spending in President Barack Obama’s 2009 stimulus bill. That’s all the more remarkable because the CHIPS Act was passed by large bipartisan majorities, with 41 Republicans and nearly all Democrats supporting it in the House and the Senate.

Yet CHIPS shouldn’t be viewed alone, Lachlan Carey, an author of the new analysis and an associate at RMI, told me. The Inflation Reduction Act which is expected to be passed by the House later in the week and the bipartisan infrastructure bill last year, bring into sharp focus a significant shift in congressional climate spending. According to the RMI analysis, these three laws are set to more than triple the federal government’s average annual spending on climate and clean energy this decade, compared with the 2010s.

Within a few years, when the funding has fully ramped up, the government will spend roughly $80 billion a year on accelerating the development and deployment of zero-carbon energy and preparing for the impacts of climate change. That exceeds the GDP of about 120 of the 192 countries that have signed the Paris Agreement on Climate Change, Carey said.

By the end of the decade, the federal government will have spent more than $521 billion–nearly half a trillion dollars–to accelerate the development and deployment of zero-carbon energy and to prepare for the impacts of climate change, he added. The CHIPS Act does not include a comprehensive climate legislation in the same manner as the Inflation Reduction Act (or IRA). Unlike the IRA, the CHIPS bill isn’t supposed to drive immediate reductions in carbon pollution or subsidize the replacement of fossil fuels with cleaner alternatives. It probably won’t help the United States get closer to achieving its 2030 target under the Paris Agreement.

Instead, the bill’s programs focus on the bleeding edge of the decarbonization problem, investing money in technology that should lower emissions in the 2030s and beyond. This is an important function in itself. The International Energy Association has estimated that almost half of global emissions reductions by 2050 will come from technologies that exist only as prototypes or demonstration projects today.

To get those technologies ready in time, we need to deploy those new ideas as fast as we can, then rapidly get them to commercial scale, Carey said. “What used to take two decades now needs to take six to 10 years.” That’s what the CHIPS Act is supposed to do, at least in theory.

The law, for instance, establishes a new $20 billion Directorate for Technology, which will specialize in pushing new technologies from the prototype stage into the mass market. It is meant to prevent what happened with the solar industry–where America invented a new technology, only to lose out on commercializing it–from happening again, Carey said. Although the directorate will focus on broad improvements across technology, such as AI and high-performance computing, two of the directorate’s 10 new focus areas are climate or clean-energy related. The new office has been given the explicit task of studying natural and anthropogenic catastrophe prevention and mitigation, as well as advanced energy and industrial efficiency technologies. This includes next-generation nuclear reactors.

The bill also directs about $12 billion in new research, development, and demonstration funding to the Department of Energy, according to RMI’s estimate. That includes doubling the budget for ARPA-E, the department’s advanced-energy-projects skunk works. (ARPA-E is modeled on DARPA, the Defense Department lab that helped give rise to GPS, the internet, weather satellites, and some mRNA vaccines. )

And it allocates billions to upgrade facilities at the government’s in-house defense and energy research institutes, including the National Renewable Energy Laboratory, the Princeton Plasma Physics Laboratory, and Berkeley Lab, which conducts environmental-science research.

RMI’s estimate of the climate spending in the CHIPS bill should be understood as just that: an estimate. The bill text rarely specifies how much of its new funding should go to climate issues. Carey and his coworkers extrapolated spending from other agencies whenever they could. For instance, the National Science Foundation has spent about 5 percent of its budget on climate and clean-energy research over the past few years, so the team assumed that about that portion of the NSF funding in CHIPS would go to those topics, he said.

Regardless of exactly how much new climate spending CHIPS ends up generating, the broader trend is clear. When you add CHIPS, the IRA, and the infrastructure law together, Washington appears to be unifying behind a new industrial policy, focused not only on semiconductors and defense technology but clean energy. The three bills combine to form a “a coordinated, strategic policy for accelerating the transition to the technologies that are going to define the 21st century,” Carey said. Over the years experts and scholars have wondered if industrial policy, which is the intentional use of law in order to grow and nurture certain industries, might make a comeback for climate change mitigation. Industrial policy was central to some of the Green New Deal’s original pitch, and it has helped China develop a commanding lead in the global solar industry.

But with these three bills, little doubt remains about the direction of the U.S. economy, Carey told me. “Industrial policy,” he said, “is back.”

The post Congress Just Passed a Big Climate Bill. It’s not that one. appeared first on The Atlantic.