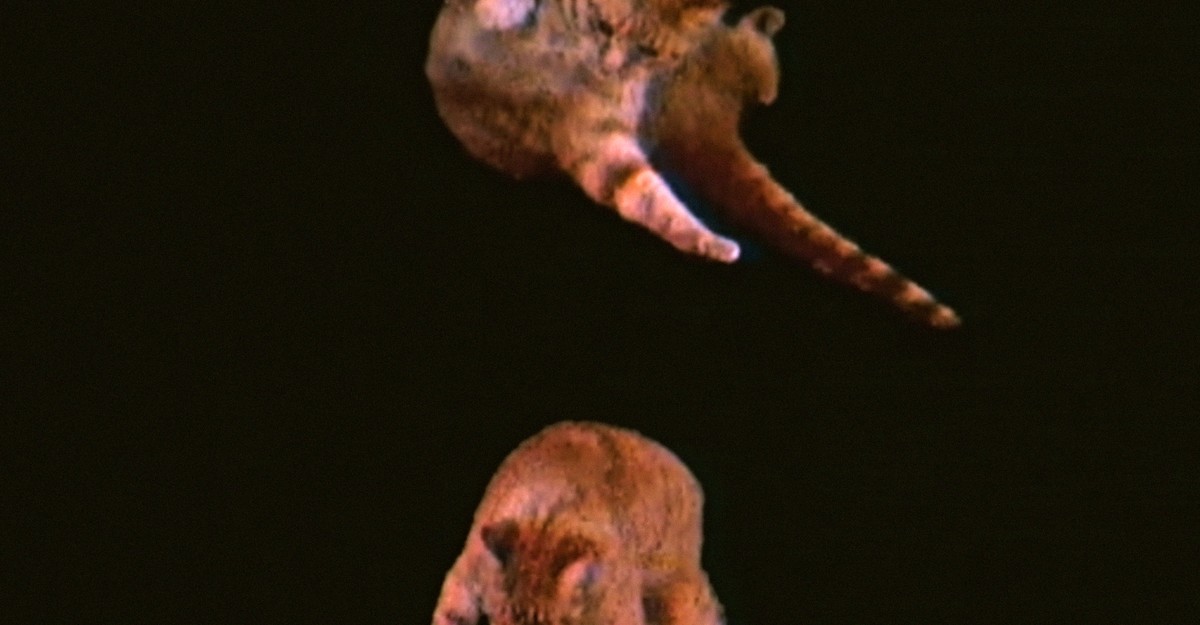 In October of 1894, at a meeting of the French Academy of Sciences, the renowned physiologist Etienne-Jules Marey showed a series of photographs that sent his colleagues into collective uproar. One conference participant claimed that Marey presented a scientific paradox which violated fundamental laws about how objects move.

At the center of the controversy was a cat. Specifically, a dropped cat that had, in midair, twisted to land on its feet. The touchdown was not the issue, and neither was the fall. What happened between was what sparked the scandal.

For years, scientists had assumed that cats could land on their feet only if they first launched themselves off a surface. This idea was based on a concept called conservation of angular momentum. It states that bodies which aren’t moving will not start until an external force is applied. Without a push, a cat would have no leverage, nothing to induce it to turn right side up. But Marey’s images revealed a cat that commenced its contortions after its descent had begun, pivoting, it seemed, off of nothing at all.

In the decades following, scientists offered up plenty of explanations for the puzzle, many of them totally missing the mark. Even today, “you’ll still find that people are arguing” about the details of cats’ tumbly tricks, says Greg Gbur, a physicist at the University of North Carolina at Charlotte and the author of Falling Felines and Fundamental Physics. Experts can all agree that cats may be not defying Physics. Cats have evolved to use its most subtleties, even when it seems impossible for them to live.

Gbur explained to me that the French Academy’s baffled scientists were thinking too simplistically about the cat’s angular momentum. Angular momentum can be preserved within a rotating object–er cat–if one half rotates in one way and the other turns in the opposite direction, kind of like a pepper grinder. The two bits of the body then act as each other’s fulcrums, imparting on one another an equal and opposite shove-y, twisty force. This is what happens in cats. “The cat skeleton is incredibly flexible,” says Barbro Filliquist, a veterinary surgeon at UC Davis. Cats can arch their spine so sharply that they effectively split their body into two, almost like “having a knee joint on top of your back,” says David Hu, a mechanical engineer at Georgia Tech.

When a cat is thrown upside-down, its head usually flips first. For that to happen, the front has to turn more quickly than the back–a move the cat probably initiates by tucking its forepaws toward its tummy (akin to figure skaters pulling in their arms while executing a rapid twirl) while the back paws remain splayed. The cat then relaxes its front legs out while yanking its back limbs in. The bit at the bum turns faster and brings the whole body back to its right side. Meanwhile, the tail may, delightfully, act as a kind of propeller, speeding the body’s spins. (This is an unnecessary perk, Gbur told me: Manx cats stick their landings just fine. )

The flippy flop happens “surprisingly quick,” says Hanno Essen, a physicist at the KTH Royal Institute of Technology, in Sweden, who has modeled the cat righting reflex. The cat can quickly reorient itself within just a few feet. This is a significant advantage that kicks-starts the whole process in a matter of seconds. That very impulse helped Essen’s mischievous childhood cat, Moushe, land safely after falling from a window some 40 to 50 feet off the ground.

Despite their aerodynamic antics, cats still face massive risk when they topple from tall perches, especially as modern buildings in urban centers have grown higher. According to Carly Fox of AMC, almost a quarter (25%) of pet-trauma cases at the Schwarzman Animal Medicine Center in New York over the last seven years were logged as “fall from high,” one of AMC senior vets. In the worst cases, so-called high-rise syndrome can saddle felines with nosebleeds, mouth fractures, collapsed lungs, broken legs, even ruptured organs.

The farther cats fall, the worse off they usually are–at least, up to a point. A smattering of research, including some from AMC, has hinted that above six or seven stories, the rate of injury might stabilize or even reverse. That, scientifically, is “weird,” says Rhett Allain, a physicist at Southeastern Louisiana University, who wrote about the phenomenon for Wired. “You never see ‘higher is better.'” Some of the data may be biased by which owners bring their cats to vets, and it’s pretty hard to ethically confirm; other studies have found quite the opposite results. With such sparse and conflicting data, “we just don’t know,” says Michael Kato, an emergency and critical-care vet in California.

If the pattern is legit, it would square with some cats’ shocking resilience at great heights. Gbur once saw a cat take an inconsequential 100-ish-foot tumble out of a tree; Fox recently treated one that survived a 19-floor fall. A cat named Sabrina once plunged 32 stories onto concrete and lived to tell the tale. Another, Jommi, reportedly fell 26 stories, punched through the roof of a tent, and was found grooming herself nearby, entirely unscathed. “I’ve seen cats that have fallen seven, eight, nine, 10 stories, and they have lacerations, maybe a broken leg, but those are fixable,” says Christine Rutter, an emergency and critical-care vet at Texas A&M University. Studies show that survival rates for high-rise syndrome in cats consistently clock above 90 percent, “which is wild to me, considering the ER and ICU I work in,” says Sophia Amirsultan, an emergency and critical-care vet at North Carolina State University.

The secret may involve cats slipping through another physics loophole. Within the first few dozen feet of descent, a cat’s body will keep accelerating, upping the impact it will feel when it finally hits the ground. That’s a pretty rough deal for cats that topple out at approximately two to five stories. Just past that fifth floor, though, an 11-pound cat will hit its terminal velocity of about 60 miles per hour; no matter how much higher its starting point, its final thud won’t be worse. The implications are bonkers: There may not actually exist a true limit, Allain told me, to the elevation from which a cat can plunge and survive.

Reaching terminal velocity can feel pleasantly weightless, and might even make the cat’s brain “stop freaking out” and its legs loosen, Rutter told me. Impact still happens, but it’s a tad more sproingy and a smidge more evenly distributed across the cat’s body. That could explain why Kato has found that the types of injuries he and his colleagues see at heights of seven stories and above tend to be more focused on the torso and jaw than the limbs.

Rabbits, too, appear to have a pretty decent righting reflex; certain types of geckos, scientists have found, can propel themselves safely down to the ground by whipping their extra-thick tails. Perhaps only the house cat has the right combination: a great sense of balance to sense when they are turning, as well as super-stretchy legs to do it, Mairin Balisi of the Raymond M. Alf Museum Paleontology in California said. Cats, which have evolved to be agile and arboreal, may even be aided by their fluid, slightly shock–absorbing physique, Amirsultan told me. Dogs, several vets told me, tend not to fare as well after a fall. Even some bigger species of cats may not always stick the landing, Balisi said. She added that The Lion King wouldn’t have been possible if they had. )

I asked Gbur whether humans could mimic the gyroscopic movements of cats. He said that . is already available. The best divers and gymnasts can be awfully feline in their flips; NASA, too, has looked to cats to teach astronauts to cavort through gravity-free space. But cats will always “do it better,” Gbur told me–though they may not enjoy the trip down. Perhaps no one knew this better than Marey, the OG purveyor of photos of dropped cats: A Nature paper published the month after the conference couldn’t help but note the “expression of offended dignity” borne by his study subject, forever immortalized on film.

When you buy a book using a link on this page, we receive a commission. Thank you for supporting The Atlantic.

The post Cats Give the Laws of Physics a Biiiiig Stretch appeared first on The Atlantic.