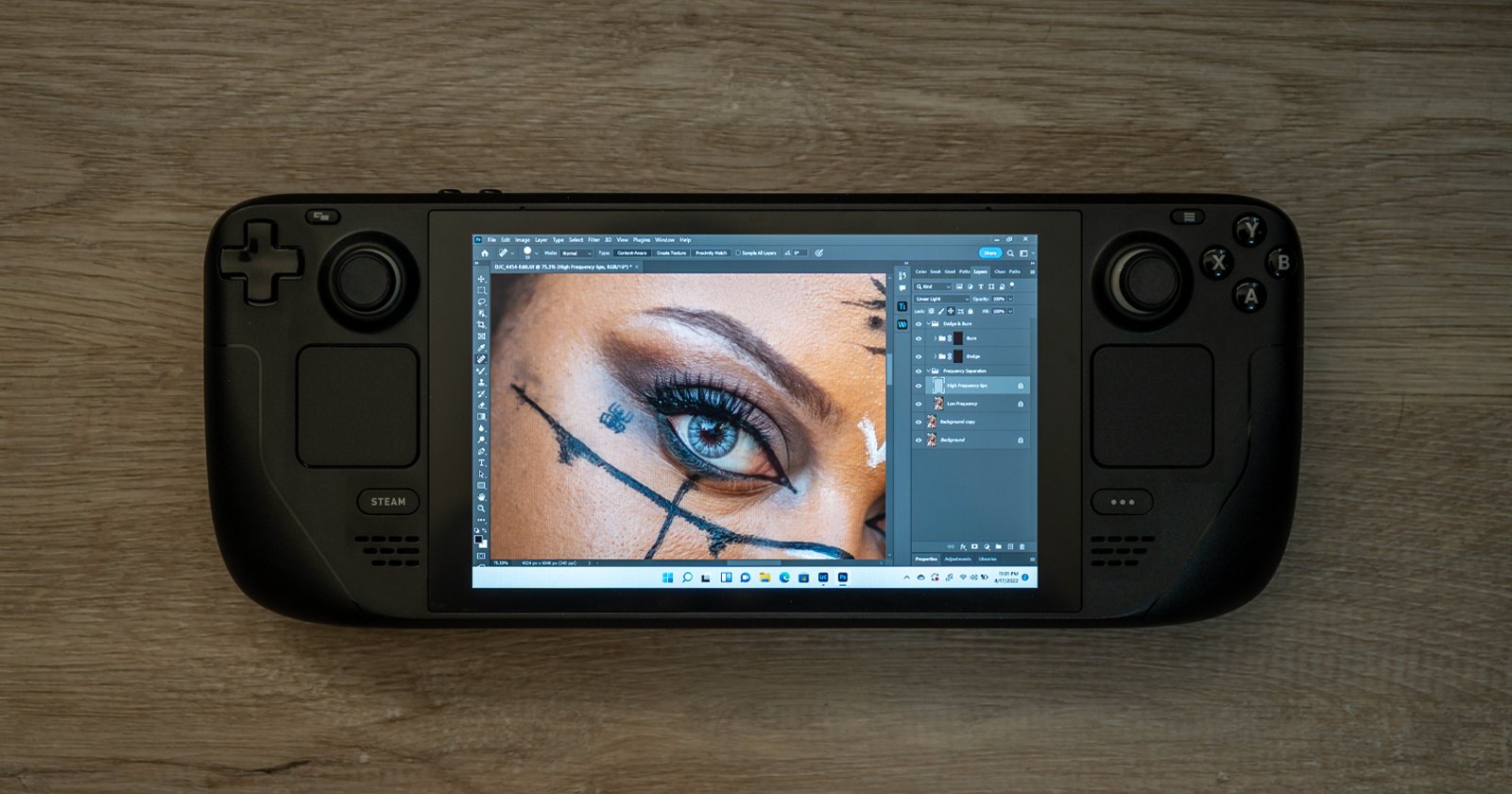 A little over a year ago, Valve announced a handheld gaming PC called the Steam Deck. In February of 2022, those who pre-ordered the device started to receive the handheld devices which have since had a huge impact on the gaming world. But what if you could do more than just play video games on the Steam Deck? What if it could run Lightroom or Photoshop? Would it be possible to edit photos on it?

The thing that you should understand about this device is that while there are many other portable consoles out there, the Steam Deck is effectively a complete portable gaming computer packed in a Nintento Switch-like chassis. The system comes pre-loaded with a Linux, desktop backend that runs Steam for the actual gaming. But thanks to the availability of a desktop mode, you can actually download and run pretty much any combination of Linux applications natively including applications like GIMP and Darktable.

Using Linux on a Steam Deck To Edit Photos

Naturally, Linux-based editing apps were the first thing I attempted. Thankfully these applications are free, but do come with a rather steep learning curve (especially if you’ve never worked with Linux before).

The Steam Deck technically comes with everything you would need to run it as a computer, including a virtual keyboard that pops up and leverages the device’s touch screen along with two touch-sensitive trackpads located on both sides of the screen. These two trackpads effectively act akin to how a full-size trackpad does on a laptop.

Leveraging these built-in tools and the Linux-based apps, I was able to load up a recent headshot session through the Steam Deck’s memory card reader and start editing the images using Darktable, GIMP, and RawTherapee. I actually messed around with a few other apps as well — all of which had a rather tough learning curve — but despite that, I was able to cull a session, do some basic edits in Darktable, and then use RawTherapee and GIMP to actually perform rather basic Photoshop-style edits including some cropping, dodging and burning, healing, cloning, and color adjustments.

To say it was cumbersome to use the built-in tools like the included trackpad would be an understatement. That said, ease of use wasn’t really what we were interested in testing. The bottom line is, if push came to shove, you absolutely could edit images using the Linux-based tools and even (with WiFi connected) upload those images to an online gallery or attach them to an email.

On the plus side, the Steam Deck supports Bluetooth so I was able to connect my Logitech or Apple wireless keyboards and mice to the Deck, which gave me even more freedom to work on the tiny device.

As good as this worked, I felt like we could go even further.

For the next step, I went ahead and ordered a USB Hub/Dock station for the Steam Deck, which allowed me to plug in multiple wired devices like a physical keyboard, mouse, external hard drives, a memory card reader, and even connect a monitor using the HDMI port.

Through this process I found that the Steam Deck can output 4K resolution, albeit at a maximum of 30hz. Still, this allowed me to work in mirrored mode or even extend the desktop in a dual monitor setup that used both the Steam Deck screen and my monitor, making the task of retouching a lot easier.

Once I managed this, the next thought was if I could get Photoshop running on the Steam Deck. While there actually is a port of Photoshop CC available for Linux devices, after an entire day of trying, it was just way too over my head. So, the next logical step was to just go ahead and dual boot the device with Windows 11 and see if that method would let me install Adobe Photoshop and Lightroom.

Installing Windows and Adobe Photoshop on a Steam Deck

I won’t get into the details of how to do it as there are dozens of video guides and instruction pages on how to set up Windows on the Steam Deck, (including official drivers for Windows from Valve directly).

Despite these resources, it still took me three days to get it running correctly. Granted, I was going about it in a particularly tricky way by using a Windows Virtual Machine (VM) to create an ISO that I loaded onto an external SSD so that I could dual boot the device and have Windows installed and operating entirely through the SSD and not on the Steam Deck (as I didn’t want to break anything permanently).

This process definitely added some levels of difficulty, but thankfully with the help of Donte Maxwell, I finally got it to run.

Thanks to the Docking Station, I was able to connect the SSD that housed Windows, a keyboard, mouse, and every other peripheral I needed to start the next step of installing Adobe Photoshop and Lightroom Classic. The process, once Windows was operating correctly, was pretty smooth.

Despite running Windows from an external hard drive, there wasn’t any noticeable lag in the system, and Photoshop and Lightroom installed surprisingly fast. I even was able to install a few plugins for Photoshop including the Retouch4Me suite and the RetouchingToolkit panels.

But would Lightroom run?

To my surprise, Lightroom worked flawlessly and easily imported 20GB worth of RAW files that I had shot on a Nikon Z6 II. Using Lightroom, I was able to quickly cull and base edit all the files I wanted to work on with the device for this test. Since I wanted to do some proper dodging and burning and since I was running Windows, I wondered if I could connect the latest Wacom Intuos Pro tablet to the device.

While I couldn’t get the Bluetooth to work (it is possible, I just didn’t want to spend more time on it), connecting the tablet via the USB cable allowed it to install and work absolutely perfectly, including enabling it as a touch surface for even more control options.

The next step was to send these files into Photoshop for final polishing, which is the next editing step I would take on any other workstation. It was at this stage that things got a little bit wonky.

While Photoshop installed fine, the Steam Deck video card (and drivers) did not have any OpenCL capabilities or support and immediately threw some errors at me once I opened up Photoshop.

Thinking the worst, I closed the error message and figured I’d still see if it could work, and well, other than trying to run plugins that actually leverage the OpenCL drivers, everything actually worked extremely smoothly.

Not only was I able to heal, clone, dodge and burn, perform frequency separation, use the Retouching Toolkit, and a host of other actions, I was even able to do all of it using a Wacom Tablet which made the entire process feel like working on any other computer.

Yes, You Actually Can Edit Photos On A Steam Deck

So, can you edit photos on a Steam Deck? The answer is yes.

Even if I were to disconnect from the keyboard, mouse, and keyboard, I could feasibly still work with Photoshop and Lightroom using just the onboard tools built into the Steam Deck.

But should you edit photos on a Steam Deck? Probably not.

As much fun as I had, I don’t really recommend it, especially if you’re not planning to use peripherals. The trackpad on the Deck just is not up to the task as far as accuracy and sensitivity are concerned when it comes to photo editing.

All this said though, if you happened to be on the road with your files and you didn’t have your laptop and desperately needed to edit photos for some reason, you could. We proved that the Steam Deck is actually a capable editing device, held back mostly by the hardware that was only ever meant for gaming. Plug in a few peripherals though, and it’s just like editing on any other computer. 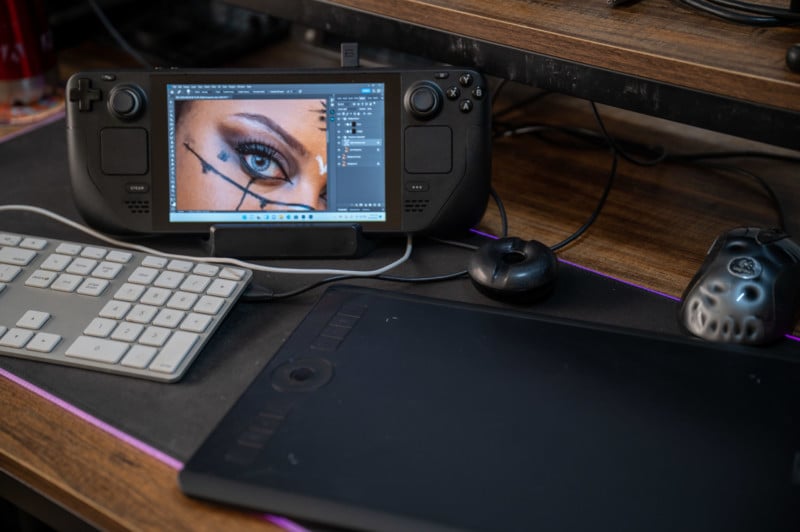 Over the course of an entire week of logistical, technical, and actual headaches, I have to admit that getting this to work, and producing the image above, gave me a massive sense of accomplishment.

The system wasn’t made for this and we had no idea if this was even going to work. The fact that it did as it did went far beyond our expectations. I’m positive it would have been easier had I just ran the Windows installation locally on the Steam Deck as well. But despite my issues, I guarantee you as time goes on and more people are tinkering with the device, better drivers and support will be available to make retouching on the portable game console even more viable.

For those interested, orders for the SteamDeck are still available with prices ranging from $399 to $649, depending on the size of the internal SSD you choose.