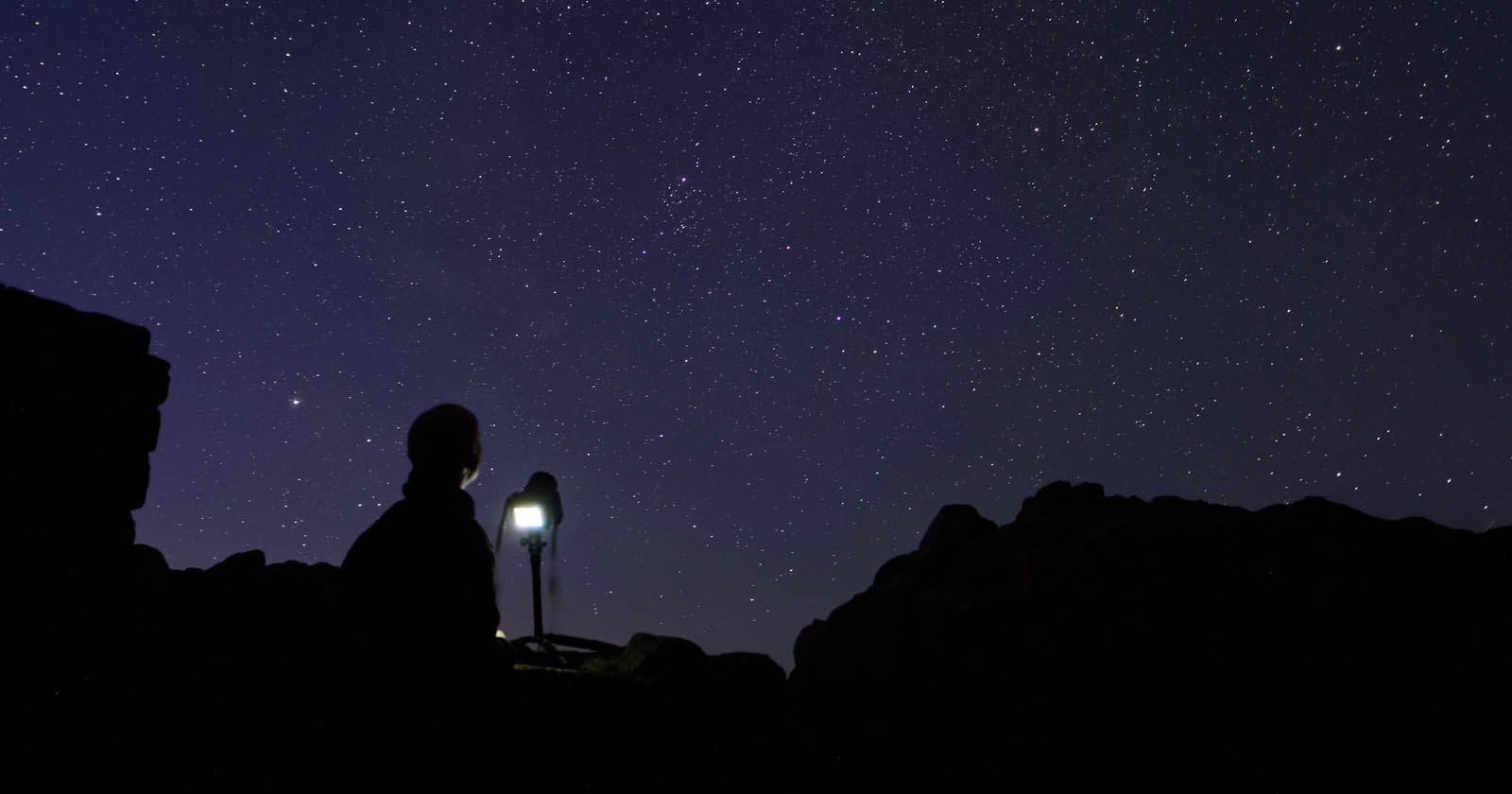 I have said it before in my all-in-one, how-to-do-everything astrophotography guide–astrophotography is more accessible than ever before. Great gear can be purchased even on a tight budget, and the advancements with compact star trackers allow for even greater detail to be captured.

As I have also said before in my mega guide, use what gear you have now to get started. But, maybe you have reached the point where it is time to upgrade, or are considering really shifting your focus into astrophotography and want to have the best camera for that. Perhaps you are on a budget and still need a dedicated camera to astro photography. Well, here is what I would recommend for cameras in 2022.

First I must disclose that I have not been paid by any of the brands mentioned in the article to recommend one product over the next. These come from my experience, research, and testing, as well as a general consensus from the astro community.

Before I get started with my recommendations, it is important to note a few technical items which play into them. The debate over whether more pixels are better for low light capability or less is raging on numerous internet forums. However, it is important to note that the resolution and ISO of the sensor will also play a role in the noise. Read noise and quantum efficiency (QE for short, this means how much light the sensor is capable of converting into electrons, AKA signal) play a vital role, as does of course the optics you are using to gather that signal.

I want this to be as short as possible, as my purpose in mentioning it is only to provide a basis for the recommendations that follow. Yes, you can downscale a higher resolution sensor to represent the lower resolution sensor of the same sensor dimensions, and if all else is constant, the noise will be the same.

With that out of the way, let’s move on to the actual recommendations.

Nikon has received a lot of flack for their Z6 and Z7 series, in particular regarding the AF performance versus the rivals of Sony or Canon. These bodies also have a tendency to age and not offer the same features as the newer models. Look, I am not going to disagree with the fact that the AF is not quite as good as its competitors, but in astrophotography, AF is irrelevant. For all other reasons, the Z6 I or Nikon Z6 II excel as astro cameras in many genres from nightscape to deep space. The line has been my camera of choice for 3 years now going strong.

It has a 24-megapixel BSI full-frame sensor that, in my opinion, is excellent in read noise and quantitative efficiency, and it also has ISO invariance along with a dual-gain sensor.

The Z6 is also capable of adapting virtually any lens from any mount as it has one of the smallest flange distances, making it really easy to transition to from other systems. But, the mount truly shines with the new Nikkor S line lenses. I personally am blown away by some of the glass in the Z system. Many Z system glasses are made from Canon L series lenses, Sigma ARTS, as well as Sony GMs. They do a great job of rendering star colors with very little chromatic aberration, coma and astigmatism. Some are better than others for sure, but in my opinion, these are top tier, which is saying a lot considering older Nikon glass had some pretty bad distortions when it came to astro. I will not be going into lens recommendations in this article, however — just know there are some great options.

The Z6 I/II can also be easily astromodified for more response in the h-alpha wavelengths. Some bodies have issues with modification, but the Z6 does not. The Z6 is also compatible with a boatload of capture software for all of you deep spacers out there making it great for both nightscape and deep space alike, depending on your telescope/lens and target. The Z6 also does not have any sensor banding issues like some Canon sensors do, nor does it suffer from Star Eater spatial filtering like all Sony’s do (yes, Sony star eater is still persistent today, Stars are smeared out as exposure time increases, and many crowded star fields turn into weird snake/maze-like groupings). The only minor issue is some concentric ringing, but there is an easy fix for it (basically just use the histogram and expose to the left) and I also personally have never had this issue.

The Z6 I and II have the same sensor, but the Z6 I can be had for cheaper. I do not find the benefits of paying extra for the II necessary for astro, but if you plan to also shoot daytime work with the camera, you may find the better AF and second card slot of the II to be much more beneficial. 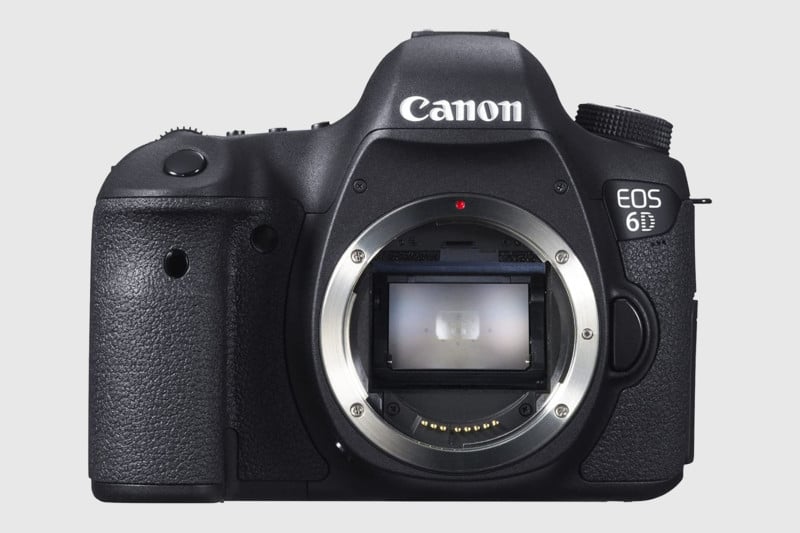 DSLRs are not quite dead yet. A DSLR is the best choice for anyone who wants to astrophotography. A full-frame camera is ideal for nightscape photography, however, the more expensive mirrorless cameras are not as good, and can be even broken. It would be cheaper to stick with a lower-priced DSLR than it is to get better glass. Fortunately, the current mirrorless offerings have made this camera particularly cheap — I am talking about the Canon EOS 6D Mark I.

The 6D is a full-frame camera with an extensive lens lineup that is hard to go wrong with. Even in 2022, this camera still shines. Despite a lack of ISO invariance and some sensor banding issues, the 20MP sensor has very low read noise. While there are some good Canon L series lenses out there that are great for astro work, I have seen better results from even cheaper 3rd party offerings such as the Sigma ARTs, Tamron, and Rokinon/Samyang glass which are all available for EF mount.

I have seen this camera dip below the $300 mark on used forums. You can also keep an eye open for the Nikon D610 which offers ISO invariance and access to the same 3rd party glass, but it is slightly more expensive sitting at around $500.

Choosing a deep-space camera is a whole other ballgame than nightscape. For proper sampling, deep space cameras must be paired with the correct Optical Tube Assembly. If you are undersampling, it means the camera is not capturing the full resolution the telescope is able to provide. Oversampling occurs when light is spread over more pixels than required to reach the full resolution, which can result in much longer integration times than necessary. Does that sound confusing? No worries, check out this online calculator which makes it easy to figure out.

Also, remember what I was saying above about how higher resolution sensors require better optics? This is a case for oversampling. There are also mono cameras and full-color cameras — those are discussed in depth in my astrophotography tutorial.

The bottom line is that I would not recommend one camera to you over another due to so many variables. You can choose from a variety of cameras, including my favorites and some that are popular with the community.

For Micro 4/3 chip sizes, I am going for the ZWO ASI294MC Pro for color, and the ZWO ASI1600MM Pro for Mono. They are both low in noise and cooling. These can be used with longer focal length telescopes for larger targets. I have noticed some amp glow with the 294MC, but this is fixed easily by proper calibration frames.

For APS-C, the ZWO ASI2600 series (the ASI2600MC Pro color camera and ASI2600MM Pro mono camera) is hard to go wrong with. Both have very low read noise and high quantitative efficiency with the color sitting at 80% and the mono at an impressive 91%. They can both be cooled, of course.

Stepping up to full frame is very demanding for deep space. This requires an OTA that can fill a full frame image circle. You also need to ensure you’re sampling correctly. Both ZWO and QHY implement the 62MP Sony IMX455 sensor in their top of the deep space cameras, but the ZWO has more driver support and is slightly cheaper. The ZWO ASI6200MC Pro is the color camera while the ZWO ASI6200MM Pro is the mono variant of the chip.

Fear not, deep space can still be done on a tight budget with more simplicity if these dedicated astro cameras are not for you yet! The Nikon D5300 and Canon Rebel T3i are hard to pass up. These DSLRs are still great, regardless of your age or specs. Both can be had with an astro mod already complete all for less than $300 and are widely compatible across the board with capture software and adapters for OTA hardware.

In deep space, accurate tracking is far more important than the camera itself, so you would be better off splurging on a good mount and saving some money on the camera if you are heavily budget restricted. They will produce great results, and they are a favorite among the community thanks to their support. My first ever DSLR was a T3i and I can still vouch for how it got me into astrophotography in the first place. 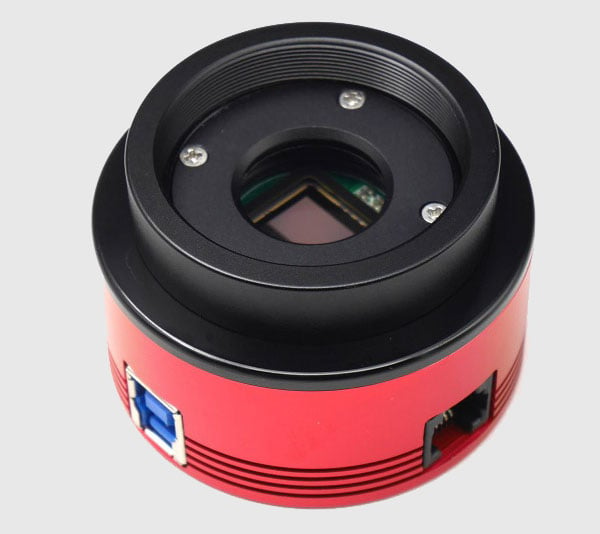 Planetary cameras shoot a lot differently than the deep space offerings mentioned above. These cameras do not require cooling or large sensors. Instead, smaller sensors and high FPS are important specs. This is because these targets are imaged much differently than with deep space. Read my complete astrophotography guide for more info on how to do so.

Just like with deep space cameras there’s a bit more to it to get your OTA to match your camera. To achieve correct scaling, you may need to use a Barlow (hardware which crops your view field)

Before we get started with my recommendations, however, I just need to note that ZWO just announced 3 new cameras at the time of writing. But, these cameras are not available to the masses yet and as a result, I have no way of knowing how capable they actually are. I wouldn’t recommend gear based only on the specs and without using it. This article is therefore based upon what is available. These might change to take into account new cameras down the line, so keep checking back!

The ZWO ASI174 is a favorite in this field. It offers a 164 FPS capture speed, which is outstanding for planetary, solar, lunar, and even as an autoguider for deep space shooters. This is a fantastic all-around camera. But, it is a monochrome camera which may be a little tougher for beginner use. For that reason, I would also recommend the ZWO ASI385MC which has a slightly slower maximum capture rate of 120 FPS, but features a full-color sensor and is slightly cheaper. Take note however that sometimes capturing planetary data in color may be difficult due to atmospheric dispersion.

The ludicrously expensive and complicated barrier of entry into astrophotography is a thing of the past. Cameras today are more affordable than ever, with older technology still doing a great job for anyone looking for a way to save some money.

Software has also been greatly improved. You don’t need a degree to use dedicated astrocams. The variety of different cameras proves that you can capture just about any subject under the sun, stars or even the sun. Ha!

About the author: Daniel J. Stein is a passionate nightscape photographer working full-time in New Jersey in his family’s commercial plumbing contracting business. The opinions expressed in this article are solely those of the author. You can find more of Stein’s work on his website and Instagram.