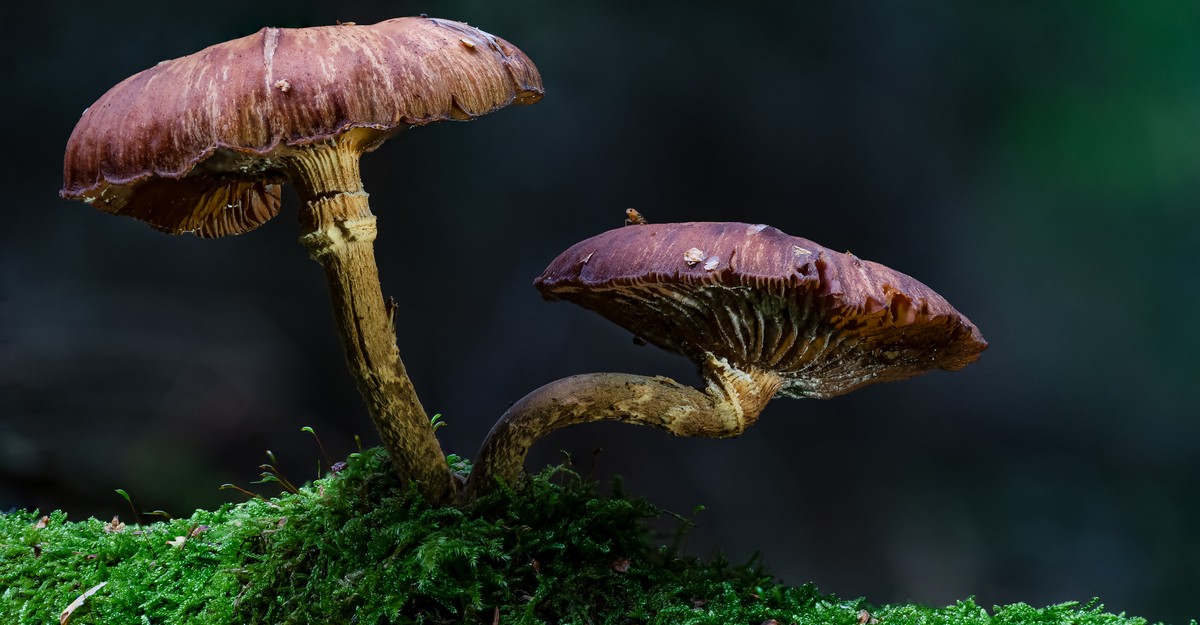 Deep in the loamy soil of forests around the world, there exists a fungus called the honey mushroom that makes its living on death. It is a parasite that feeds off weak trees and then eats their dead flesh. Orchards and vineyards have fallen to it; gardeners, farmers, and foresters spend their days fruitlessly fighting the pesticide-resistant scourge. Although the bulk of the fungus’s mass is underground, its devastation is visible to anyone who’s flown over the gray, balding patches of woodland where the pathogen has felled its hosts.

The honey mushroom is also an exemplar of the extreme forms that life can take. Thousands of years ago, one honey-fungus species, Armillaria ostoyae (also known as Armillaria solidipes), birthed a spore that settled in what we now think of as Oregon, started to spread, and never stopped. “It was just extremely, extremely successful at growing,” says Adriana Romero Olivares, a mycologist at New Mexico State University. “And so it got extremely, extremely large.” Today, that individual fungus inhabits roughly 2,400 acres of earth. Nicknamed Humongous Fungus, it is one of the planet’s largest known organisms, and the biggest ever recorded by area on land.

The honey fungus is an unlikely candidate for such a title: It’s a microbe with an unsettling MO. Humongous Fungus, however, is resilient, flexible and indefatigable. It’s a survivor, but its potential reach could continue to expand. Mee-Sook Kim is a U.S. Forest Service research plant pathologist. “As long you have trees this fungus can thrive.” “It has, theoretically, indefinite growth potential.” Humongous Fungus has two main rivals for the title of World’s Largest Organism; it may outlast both, not just because it’s resilient, but also because it is unusually well equipped to profit from this planet’s ongoing epidemic of death.

The criteria used to determine Earth’s largest organisms is not terribly scientific. “We don’t spend a lot of time precisely measuring ‘largest’ to win a competition, per se,” says Paul Rogers, an ecologist at Utah State University. Still, it’s generally accepted that three contenders are vying for top billing: Humongous Fungus, in Oregon’s Malheur National Forest; Pando, the gargantuan grove of quivering aspen in central Utah; and a recently discovered seagrass in Shark Bay, off the western coast of Australia.

All three are objectively ginormous, covering many acres of land and weighing thousands of tons; they are genetically identical throughout, each supposedly sprouted from a single unit of life. The Australian seagrass, which blankets roughly 49,000 acres of ocean floor, spans more area than Humongous Fungus. And although the shroom has colonized more territory than the Very Big Boy that is Pando, a 106-acre male aspen clone, the tree grove clocks in at about 6,500 tons, probably besting the water-hoarding shroom in sheer “dry weight,” Rogers told me. It’s hard to know how much the fungus or seagrass weighs. According to completely objective mycologists, Humongous Fungus has still much to be proud of.

If Armillaria has a home-field advantage anywhere, it’s underground. The fungus’s rhizomorphs–black, ropy, root-like growths–can snake through the soil for many meters, sniffing for vulnerable trees. Once the fungus finds a suitable host–just about any tree or woody plant–it infiltrates the root system, then fans out into felty white filaments beneath the bark that gush out enzymes, transforming tissues into mush, says Jim Anderson, a mycologist at the University of Toronto. The fungus is so tenacious that it has little trouble just “burrowing straight through” trees’ outermost shields, including bark, says Debora Lyn Porter, an engineer at the University of Utah, who’s investigating the rhizomorphs: “It’s super, super strong.”

Honey mushrooms aren’t the only fungi with rhizomorphs. But Armillaria‘s versions “are particularly tough,” says Laura Bogar, a mycologist at UC Davis. They can soak up minerals from the soil and weaponize them; they can withstand most fungicides–they “basically eat that stuff for breakfast,” Anderson told me. Porter has even tried boiling rhizomorphs or dunking them in acid, to little effect. And starved of living trees, the structures can go dormant in the soil for decades, waiting to latch on to their next arboreal snack. When asked what can be done to rid plants of the fungus, Anderson told me that his best answer is “not much.”

All of that helps explain the behemoth sizes the fungus can reach. Oregon’s Armillaria expanse is the biggest individual recorded, but plenty of other ginormous specimens have been documented, including one on Michigan’s Upper Peninsula, which Anderson has studied for years. More, yet undiscovered, may lurk beneath the ground.

Pando and the seagrass, meanwhile, seem a bit weirder than the rest of their kind. Other clonal aspen groves exist–a quirk of the trees’ unusual horizontal roots, which sprout their own stems–but very few even come close to rivaling Pando in mass. Part of Pando’s success seems genetic: It carries an extra copy of its genome, a trait that’s been linked to fast growth. Chance also played some role. Thousands of years ago, an aspen seed likely happened upon a super-stable patch of soil and just never collided with any conditions that halted it. And there’s quite a strong strong case for the seagrass being unique, says Elizabeth Sinclair, a biologist at the University of Western Australia who helped unveil the plant’s genetic makeup. The hybrid is a cross between two species, and it contains twice the genetic information from its parents. It may be sterile because it has multiplied itself by repeatedly xeroxing.

A freak event could easily take aspen or seagrasses out of the big-bodied race. Armillaria, however, just needs to keep on Armillaria-ing to stay in contention. The fungi will likely be able to withstand some of the twists and turns of a fast-changing planet: droughts, wildfires, storms, rising temperatures, and the many human interventions that are making forests less habitable. Armillaria “will probably outlive a lot of things, including us, including a lot of the plants it prefers,” Romero Olivares told me.

Armillaria is not a villain. A decomposer that prunes maladapted trees and returns their nutrients to the soil, it can play “quite a beneficial role,” Kim, of the Forest Service, told me. The antihero keeps the forest healthy and its ecosystem in good shape by constantly reinventing itself.

But the fungus can be seen as a reflection of our indifference. When offered up trees that are fragile, honey mushrooms will take the easy meal. As rising temperatures and droughts strain forests, as invasive insects gnaw through wood, as humans cull stands through logging and slash the diversity of plants, as fire suppression leaves flammable trees in too-tight clusters, “that’s all more food and fodder for the growth of Armillaria,” says Ariel Cowan, a fire ecologist, mycologist, and forest-ecosystem scientist at Oregon State University.

The fact that Humongous Fungus is even growing at its current size is, Cowan said to me, “a sign of a bigger problem”, which is people. The fungus might still be present if humans allowed natural fires and thinned forests to continue burning. The fungus would be less problematic and more compact, and it wouldn’t bring about death. Romero Olivares explained to me that it was taking advantage of ecosystems being damaged. The worse we treat trees, the bigger the fungus gets.

The problems that Armillaria capitalizes on are putting other big organisms in jeopardy. In Utah–where humans have driven out predators such as wolves–wild mule deer and domestic cattle are crunching too quickly through Pando’s young aspen; the grove can no longer replace its clonal trees as fast as they are being lost. The traits that helped the aspen win out for thousands of years are now “working to its detriment,” Rogers said, and the grove is dying. This is the double risk of being large: If the environment you choose doesn’t suit your life form, the entire enterprise will go down.

The prognosis for the Australian seagrass is better, but not necessarily good. Sinclair said that the seagrass’ double-sized genome allows it to cope with a variety of environments. The marine plant even survived a massive heat wave that swept through Shark Bay about a decade ago and “cooked” a whole swath of underwater life, she said. “But I don’t know how much longer it can do that if climate change keeps progressing.”

Eventually, the world may grow too harsh for even the honey mushroom; no one yet knows where its limits lie. Cushioned underground, the fungus is buffered from the elements. But it does depend on its hosts. At some point, Bogar told me, “what happens to plants will also happen to the fungi.” Contemplating such a future is sobering, Anderson said: “A world in which conditions managed to do away with Armillaria would be a truly hurting place for us.”

As Rogers monitors Pando’s withering state, he has grappled with what it would mean to lose something of such staggering size. Pando, Humongous Fungus, and the seagrass all thrived unencumbered for millennia. Any recent reversals of fate, he said, can really only “point the finger directly back at us.”

The death of a plant or fungus, however large, may feel less wrenching than that of, say, a blue whale: an animal with a brain and a heartbeat, contained by skin and founded in bone. We can observe such a demise in one dose. But the perishing of a giant organism is never siloed. Pando, Humongous Fungus, and the seagrass are so colossal that they have interlaced themselves with their surroundings; their loss would imperil the flora and fauna that depend on them. If and when they die, it will mean the massacre of an ecosystem–the vanishing of not one, but many.

The post As Long as Trees Exist, a Humongous Fungus Will Keep Growing appeared first on The Atlantic.