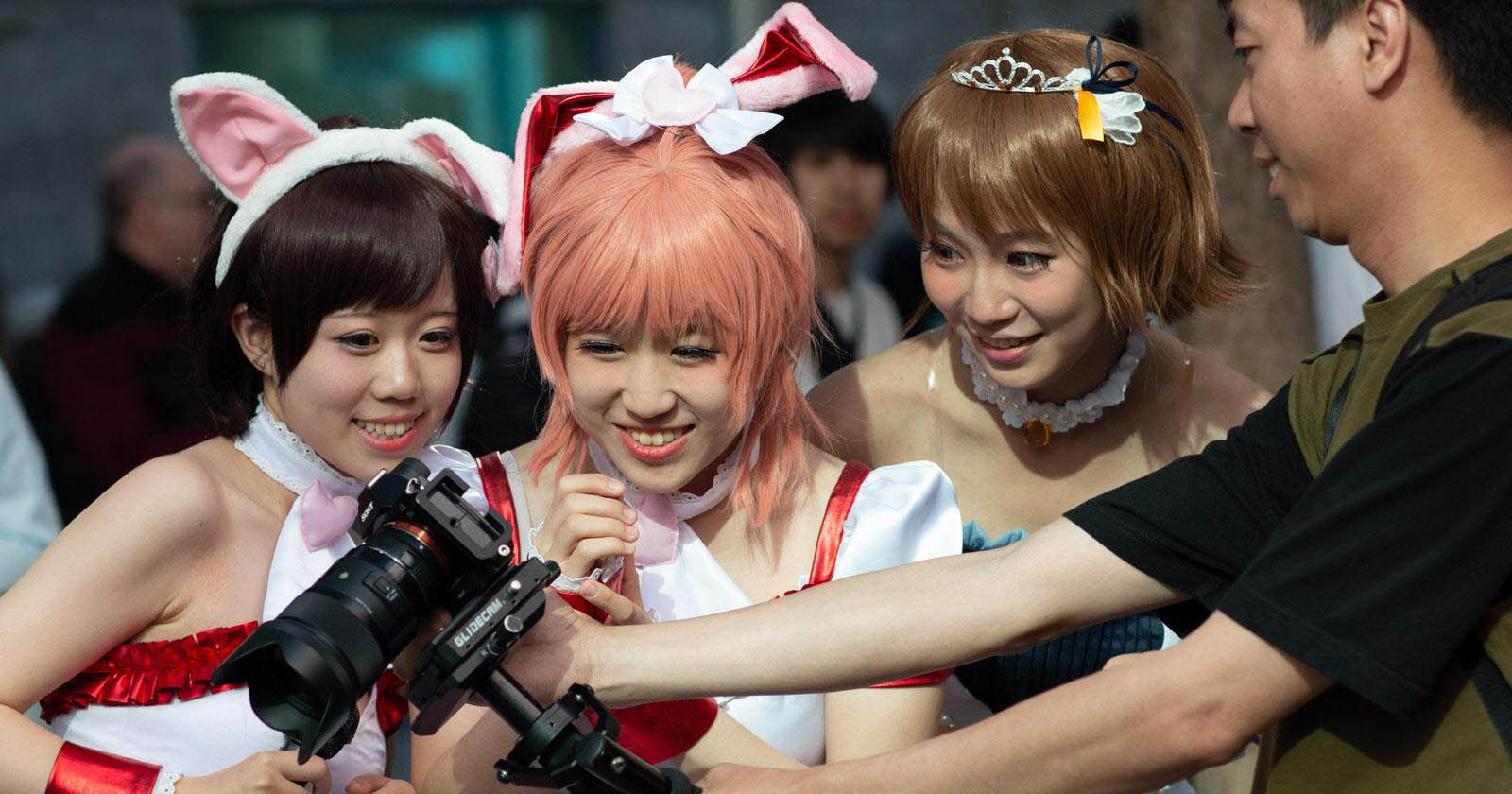 Perhaps you have been in this situation. Sometimes you miss the opportunity to capture a truly interesting subject. You can feel your heart racing, you get sweaty palms, and your nervousness can make it difficult to ask for permission to take someone’s photograph. Sounds familiar? If you don’t get the chance to capture the moment, it can make things difficult.

You’ve probably had moments when taking pictures of people was difficult. You’ve learned that over time and with practice, you were able to become comfortable and are now able to approach subjects with a little more ease. But for the new photographers, this could be crippling if you’re not used to talking to people or just downright shy.

There are many conversations about how introverts can become photographers, and what to do to overcome shyness. Yes, it is possible but it takes time and practice to develop the skills and courage to approach people and talk to them when taking their photos. Confidence doesn’t come easy for some people so it does require some practice.

One of the best places I found helpful for me was at an anime convention.

The Pros of Cons

Around that time, as I was absorbing this knowledge, I was asked to go to an anime convention, or “con” for short. My brother-in-law convinced me that it would be a good place to practice my photography and I would get to try some of the things I learned about posing.

If you’ve never been to a comic or anime convention, it’s a great place to take photos of different cosplay (costume play) characters. Cosplayers spend many hours or even months making their costumes. They can achieve amazing results if they are passionate about their work. What you get are some amazing photos of people with colorful and creative costumes. It’s possible to see the characters in comic books and movies come alive.

The bonus to these cosplayers is that most of them know their character well and know how to strike a pose mimicking their character. Although you may need some guidance, most cosplayers are good. Additionally, cosplayers want to have their photos taken. This is a great opportunity to meet people and ask them questions without being rejected. Anyone in costume can expect it.

Surprisingly some cosplayers tend to be shy or introverted. However, this shouldn’t stop you asking for their permission to take your photos. They usually have a couple of poses ready for you.

As I followed along taking photos of cosplayers already posing for other photographers, I realized that I was hesitant to ask a cosplayer if I could take their photo. It was difficult for me to approach strangers and ask them if they would be willing to take a photo. More than half of the photo opportunities that I was given were lost.

Sometimes I would just shoot over the shoulder of another photographer (yes, it’s an acceptable practice particularly if there is a crowd of photographers taking photos as long as you don’t intrude on the main photographer’s shot). Although I did not get the best shot, it was what I could do. When I compared my photographs to those of my brother in law, it was clear that I regretted not asking for more photos. It was clear that I didn’t have the confidence to ask strangers for a photoshoot.

Fortunately, I was able to attend another convention just a few months later. Again, applying what I’ve learned, I kept telling myself that I need to get more shots in. I attended with the main goal of getting as many shots as I can by asking people for a quick shoot. Because I was more interested in talking with people than worrying about their backgrounds or how they’d pose, the backdrop and location of my shots didn’t matter to me. My goal was to increase my courage. I found that I was slowly getting better.

I found it easier for me to ask a cosplayer who wasn’t busy shooting with other photographers and who looked like they were just hanging out. It also made it easier if I recognized the character or was intrigued by their costume. My photographer instinct started to kick in as I got more comfortable and was able to pick better backgrounds, which can be challenging at events like these. I also provided more guidance with the poses.

I continued to attend these conventions not only because it was fun, but it was an excellent way to practice approaching people and talking to them, while of course practicing my photography. The big confidence booster was showing my photos to the cosplayer and seeing their reaction to the shot on the back of my camera. I would trade contact information with them and share the edited photos with them.

Eventually, I would get to know some of the people and would set up photoshoots with them at upcoming cons. (Sidenote: most of the photographers and cosplayers have a mutual understanding to trade for prints or TFP for each other’s time.) You’ll begin to recognise fellow cosplayers as well as regular photographers, and you will build camaraderie with them.

An added benefit to these conventions is the opportunity to test out your gear or a particular shooting style or lighting. I rarely bring a lot of equipment so I choose what gear I will use that day. Conventions are usually spread over several days so you have plenty of opportunity to experiment with different items.

My brother-in law would often bring along light stands or continuous lights to the convention, and would also try different lighting configurations and modifiers. By letting me test out some of his lights, I was able to get more dramatic shots in the evening that other photographers were not able to capture. It was through this that I became interested in flash off-camera.

We would ask some cosplayers earlier in the day if they were up to doing a photoshoot later that evening and set up a location and time. We usually explain if we were trying out a new light setup or ask if they had anything specific they wanted to try. You should give your child the opportunity to take control of their poses. If they have a suggestion during your shoot, give it a try.

Some cosplayers take pride in their craft and love to create action shots of themselves. You should be open to trying new things depending on their requests. You can admit to not knowing if the shot will turn out, but you are open to trying it. Being humble will make you a better photographer.

If the shot is successful, you may end up the hero. You’ll get more comfortable talking to others and asking them permission to take photos. It’s surprising how comfortable and confident you become after working with just a couple of cosplayers.

If you decide to attend an anime convention, here are a few tips that I found helpful:

Be respectful to everyone; photographers and cosplayers alike. Don’t be that one photographer who thinks they own the photo session and gets upset at other photographers taking photos. Respect the time of cosplayers. It shouldn’t take longer than five minutes to capture some decent poses unless you have arranged a photo shoot with your cosplayer in advance. It is important to determine how long you will need for the shoot and when you have them available. Also, keep your hands to yourself. Ask the cosplayer to move hair or adjust their costume instead of doing it for them. If they have a friend with them, ask if they can adjust what is needed. Nearly every convention enforces a code of conduct. Make sure to read it. Cosplay does not constitute consent. I only mention this because some costumes may be revealing or explicit in nature. Be respectful.

Ask if you can take their photo. Simply asking “excuse us, could you take your picture” can go a long ways. You may be able to get some decent shots from afar using a zoom lens or by piggybacking off someone else’s shot but it may not be what you want and you might miss eye contact which could make or break the shot. Some cosplayers know how to work a session and look at different photographers between poses giving everyone an opportunity to get a shot in so be ready. Because cosplayers have spent a lot time making costumes, they expect that people will ask them for photos.

Focus on some details. There are many intricate details in some costumes. After taking a few photos of their poses, ask if you can get a close-up on some of the details of their costume. I found that asking about their costume and how they made it or how much time they put into it is a great way to get them to talk to them. They do most of the talking and it breaks the ice for conversation. Another way to break the ice is to ask who they are dressed as. These characters are not easy to identify so I always ask for information.

Be prepared to share contact information. You can share your contact information on Instagram, YouTube and TikTok. Most cosplayers will expect to receive a copy without compensation. It doesn’t have to be full resolution but usually something acceptable for social media like 1400px. Usually, I post my edits on Instagram and also a library on my website. You could either send the photos directly or message them to find out how they can access them. It’s not a bad idea to have some business cards ready or print out some tabs that have your social media handles or other contact info on them. Some cosplayers do this as well.

You Miss 100 Percent of the Shots You Don’t Take

After attending a few of these conventions, I noticed my confidence growing to a point where I can approach people for a photo shoot. I am now able to apply my newfound confidence in everyday photography. Even though I don’t really do street photography much, I am able to walk about and snap a few photos of the surroundings. It’s amazing how few people pay attention when someone is using a camera. With everyone carrying a phone and taking photos and selfies of everything and anyone around them, people may have become less sensitive to the camera.

Don’t get me wrong. Sometimes I hesitate. I just have to remind myself of what legendary hockey player Wayne Gretsky was quoted as saying, “You miss 100 percent of the shots you don’t take.” This is so true in photography. You should be always ready to capture the shot, no matter if you are a street or sports photographer. You should always be ready to take the shot when you have an opportunity. The more you shoot, the more you’ll feel comfortable and confident.

About the author: Mario Supnet is a photographer and grant writer based in Las Vegas, Nevada. The opinions expressed in this article are solely those of the author. You can find more of his work on his website and Instagram.