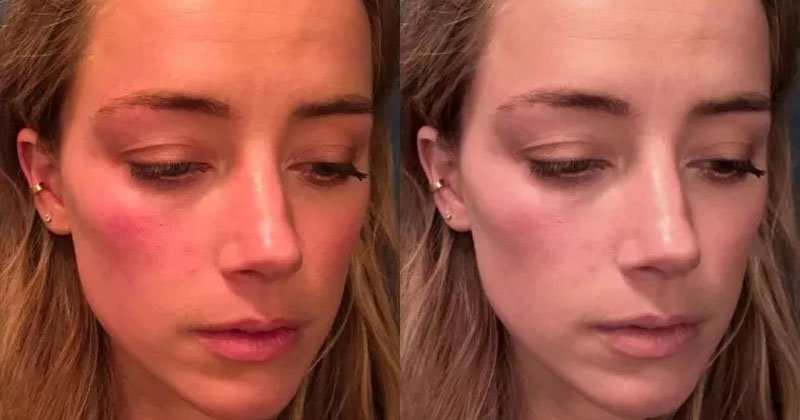 Camille Vasquez, Depp’s attorney, grilled Heard during her cross-examination yesterday and accused the actress of enhancing the saturation to make her face “look more red.”

Hollywood star Depp is suing Heard, his ex-wife, for $50 million in lost earnings after she wrote an op-ed for the Washington Post in 2018 where she stated that she was the survivor of domestic abuse. His team claims that Depp’s career has been severely damaged despite not mentioning him by name.

During yesterday’s trial at Fairfax County Courthouse in Virginia, Vasquez pulled up near-identical photographs of Heard’s alleged injuries that were taken on the same date, May 21, 2016.

The images are almost identical and can barely be distinguished from each other, with the exception of one image that appears to have been enhanced by saturation. Heard’s skin is redder and her hair appears blonder.

“You testified yesterday that the only difference between these two photographs is that the light was turned on,” says Vasquez.

But, both photos clearly show that the light was on. , the lawyer who has been a prominent figure in the case , deftly pointed out this fact.

Heard asserts that the “saturated” image was captured in a vanity mirror with yellow-hued lamps, while the one without the bulbs wasn’t.

“Isn’t it true that you just edited these photographs,” Vasquez says to Heard. Did you not just increase the saturation to make the face more red Heard claimed that she has never edited any photograph but also testified that it was the original.

The courthouse incident sparked a massive online reaction. People posted “proof” that both images were identical and only the edit was the difference.

One Twitter user uploaded an example of both pictures overlaid on top of each other, which appears to show them lining up perfectly.

Here’s evidence: overlay of both images.
Amber Heard edited her photos so her face would look red. #DeppVsHeard#JusticeForJohhnyDepp pic.twitter.com/VNNciGhhHy

” “It is impossible to turn on the light and have your hair exactly in the same place, there would be something called gravity,” another user adds.

Another person tweeted a tutorial on how to saturate the same picture of Amber Heard’s “injuries” on an iPhone. The result was identical to Heard’s “vanity mirror” picture.

Here’s Amber hearing Amber edit her photo. This isn’t best quality it’s a screen shot from the trial but it will do #JohnnyDeppVsAmberHeardTrial #JohnnyDeppvAmberHeard #AmberHeardIsALiar #DeppvHeard #JusticeForJohnnyDepp pic.twitter.com/aPJ8NfrC2P