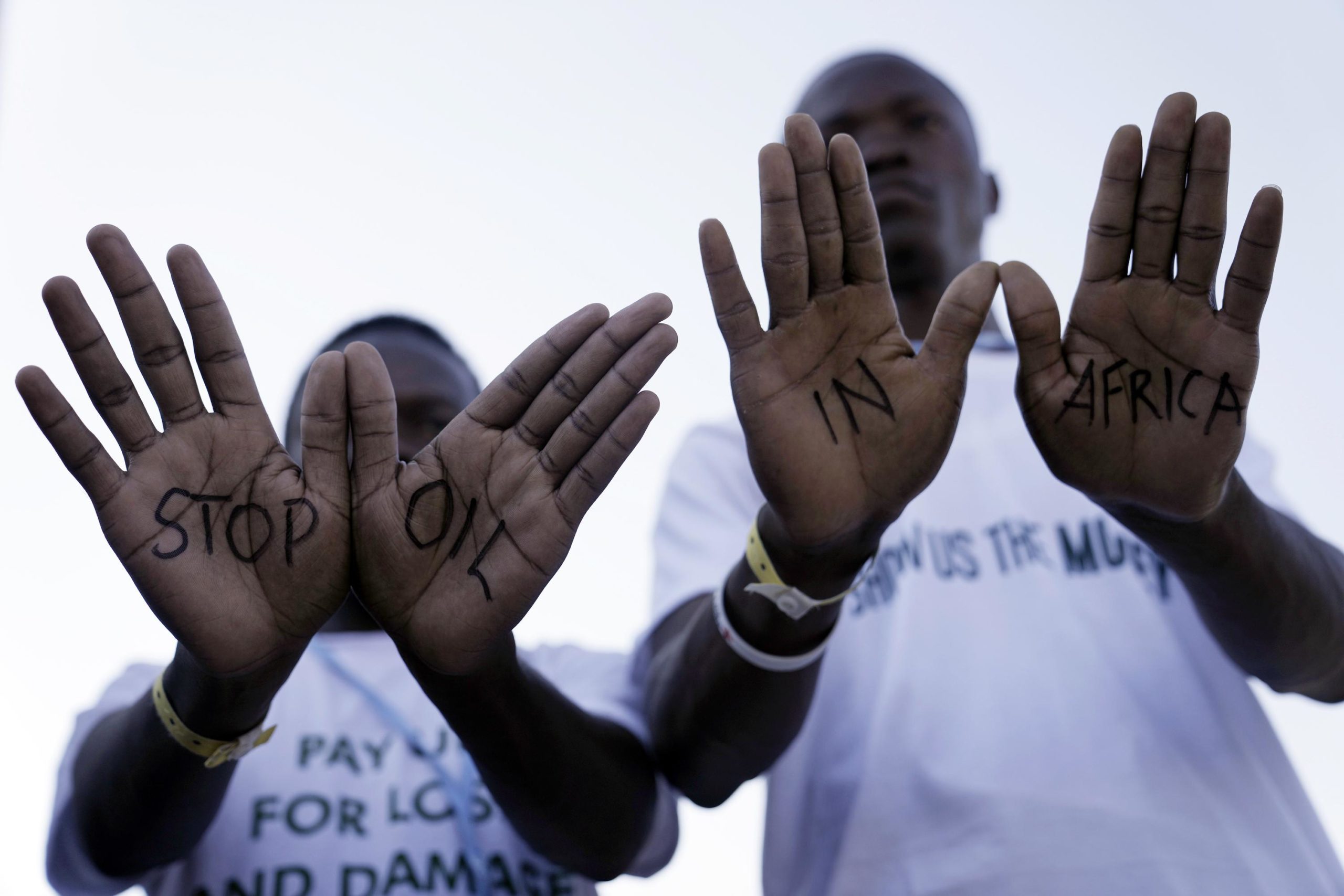 SHARM EL-SHEIKH, Egypt — After days with almost no demonstrations, there were several small protests at this year’s UN climate conference calling Friday for the developed world to fight global warming more fairly and effectively.

Demonstrators called for rich nations to compensate developing countries for climate change, demanded that a pipeline project in Congo be scrapped and complained about a lack of political will to sharply reduce greenhouse gas emissions, the main cause of climate change.

U.S. President Joe Biden arrived in Egypt Friday to meet with Egyptian President Abdel Fattah El-Sisi and then address delegates of other nations.

“I am standing shoulder to shoulder with my sisters and my brothers from Mother Africa,” said Imam Saffet Catovic of the Islamic Society of North America. “It’s time for the global north to pay for their responsibility.”

Lucky Abeng, a Nigerian activist from the Pan-African Climate Justice Alliance, said the group would continue to pressure world leaders to do more and “will not be intimidated.”

Often a large presence at climate negotiations, protests had been mostly muted this year. Activists blamed the high costs of travel and accommodation in this resort town and fear that the Egyptian government could crack down despite promising to allow protests. The usefulness of demonstrations is also being doubted by activists.

The protests were inside and around the main conference center. Other Conference of Party meetings have seen raucous protests around various parts of host cities.

“We require countries such as the United States to lead the fight against climate change, stand alongside the people and the planet, and support the next generation,” stated Vanessa Nakate from Uganda, who is a UNICEF Goodwill Ambassador. “So my message to President Biden: will you show us the money? Will you stand with the most vulnerable communities?”

In one protest, dozens of medical workers from various countries laid down to perform what they called a “die-in,” and performed cardiopulmonary resuscitation to show the urgency of addressing climate-change impacts. That’s the initial stage of this emergency. And in the longer run, the long-term therapy is climate justice and systemic change,” said Bea Franziska Albermann, a Swiss physician and climate activist

Other protests featured signs with messages and chants like, “Pay up for loss and damage!” and “People vs. Fossil Fuels!”

“The main oil producers are here in this summit,” said Philbert Aganyo of Kenya, protesting a large pipeline in the Congo. “Why are we inviting polluters to conversations of an issue they caused?”

“We are aware that a just energy transition won’t happen overnight and that is why we are appealing for a systematic scale-down of the use of fossil fuels,” he said. The pipeline is owned by Total Energies and China National Offshore Oil Corporation, as well as the Ugandan, Tanzanian, and Tanzanian governments. It runs from Hoima in Uganda to Tanga Port, Tanzania. It’s criticized by international environmental groups and communities along the proposed route.

Several world leaders demanded that developed countries spend more money to aid developing nations in coping with the effects of climate change. In addition, there have been numerous calls to drastically reduce greenhouse gas emissions. These are still on the rise. Beyond leaders and negotiators, the summit includes scientists, academics, journalists and representatives from companies ranging from those developing low-carbon projects to traditional oil and gas firms.

Global Witness, Corporate Accountability and Corporate Europe Observatory said that they have counted 636 people linked to fossil fuel companies on the meeting’s provisional list of participants, an increase of more than 25% compared to the 503 fossil fuel lobbyists counted at last year’s climate talks in Glasgow, Scotland.

“Tobacco lobbyists wouldn’t be welcome at health conferences, arms dealers can’t promote their trade at peace conventions,” the groups said. “Those perpetuating the world’s fossil-fuel addiction should not be allowed through the doors of a climate conference.”

Friday has a day for climate protests worldwide since Swedish activist Greta Thunberg launched the Fridays for Future movement in 2018. On Friday, there were demonstrations against climate change in many countries including South Africa and Italy.

Greta Thunberg, like most Fridays rode her bike in front of her country’s parliament. Thunberg said that although she didn’t intend to go, it was crucial for activists.

She stated that the current COPS will not lead to any significant changes if there isn’t enough pressure from outside.