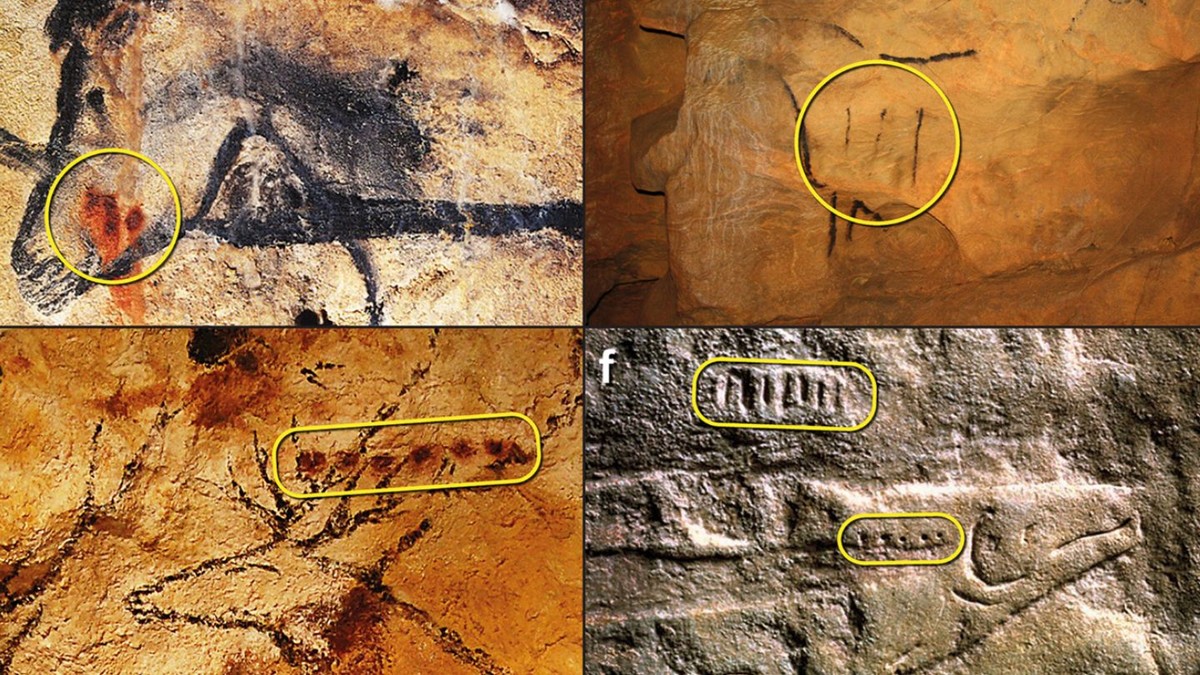 In what may be a major archaeological breakthrough, an independent researcher has suggested that the earliest writing in human history has been hiding in plain sight in prehistoric cave paintings in Europe, a discovery that would push the timeline of written language back by tens of thousands of years, reports a new study.

Hundreds of European caves are decorated with mesmerizing paintings of animals and other figures that were made by our species between roughly 15,000 and 40,000 years ago, during the Palaeolithic Age when humans were still hunter-gatherers. These cave paintings often include non-figurative markings, such as dots and lines, that have evaded explanation for decades.

Ben Bacon, a furniture conservator based in London, U.K. who has described himself as “effectively a person off the street,” happened to notice these markings while admiring images of European cave art, and developed a hunch that they could be decipherable. Now, Bacon has unveiled what he believes is “the first known writing in the history of Homo sapiens,” in the form of a prehistoric lunar calendar, according to a study published on Thursday in the Cambridge Archeological Journal.

“I think that the cave paintings fascinate us all because of their beauty and visceral immediacy,” Bacon told Motherboard in an email. “I was idly looking at Palaeolithic paintings one night on the Web and noticed, purely by chance, that a large number of animals had what I took to be numbers associated with them.”

Intrigued by the markings, Bacon launched a meticulous effort to decode them, with a particular focus on lines, dots, and a Y-shaped symbol that show up in hundreds of cave paintings.

Previous researchers have suggested that these symbols could be some form of numerical notation, perhaps designed to count the number of animals sighted or killed by these prehistoric artists. Bacon made the leap to suggest that they form a calendar system designed to track the life cycles of animals depicted in the paintings. He enlisted leading archaeologists from Durham University and the University College London to develop the idea and co-author the new study.

“That we are looking for number-based information about specific prey animals is therefore our point of departure,” the researchers explained in the study. “It seems to us unnecessary to need to convey information about the numbers of individual animals, the times they have been sighted, or the number of successful kills.”

“It seems far more likely that information pertinent to predicting their migratory movements and periods of aggregation, i.e. mating and birthing when they are predictably located in some number and relatively vulnerable, would be of greatest importance for survival,” they added.

The researchers note that the paintings are never accompanied by more than 13 of these lines and dots, which could mean that they denote lunar months. The lunar calendar they envision would not track time across years, but would be informally rebooted each year during a time in late winter or early spring known as the “bonne saison.” The “Y” symbol, which is commonly drawn directly on or near animal depictions, could represent birthing because it seems to show two parted legs.

“We adopt the simple solution that they started counting months at the start of the bonne saison and continued until counting became irrelevant in late winter—simply re-starting the count of months at the start of the next bonne saison,” the team said in the study. “A great advantage of this calendar is that it is stable in describing the life-cycles of animals and plants despite great geographical and cultural differences in the European Upper Palaeolithic.”

To test out this hypothesis, the team compiled a database of more than 600 line and dot sequences without the Y symbol, as well as some 250 sequences with the Y, which appear mostly in paintings from France and Spain. These sequences span tens of thousands of years, and accompany many different animal depictions, such as aurochs, birds, bison, caprids (such as goats and antelopes), deer, fish, horses, mammoths, and extinct rhinos that once lived in Europe.

After conducting a statistical analysis of the database, Bacon and his colleagues were amazed to find that their lunar calendar seems to hold up well with the patterns.

“Overall, there is a remarkable degree of correlation between the numbers of lines/dots in sequences with and without and the position of and the mating and birthing behaviors of our analytical taxa,” the researchers said in the study. “Our data do not explain everything, but even taking imprecision and regional variability into account, the degree of support for our hypothesis is striking.”

“Our data indicate that the purpose of this system of associating animals with calendar information was to record and convey seasonal behavioral information about specific prey taxa in the geographical regions of concern,” they added.

Bacon told Motherboard that putting all of this together has been “exhausting” and that the team will hold off on celebrating until they have published all of their findings. The researchers also anticipate arguments among experts around the exact definition of “writing” and whether their hypothetical calendar would neatly fall into that category.

“We do not want to press the controversial (and in many senses, semantic) question of whether writing was a Paleolithic invention; perhaps it is best described as a proto-writing system, an intermediary step between a simpler notation/convention and full-blown writing,” the researchers said in the study.”

“Assuming we have convinced colleagues of our correct identification, there will no doubt be a lively debate about precisely what this system should be called, and we are certainly open to suggestions,” they continued. “For now, we restrict our terminology to proto-writing in the form of a phrenological/meteorological calendar. It implies that a form of writing existed tens of thousands of years before the earliest Sumerian writing system.”

It would be hard to overstate the magnitude of this discovery, assuming it passes muster in the wider archaeological community. It would rewrite the origins of, well, writing, which is one of the most important developments in human history. Moreover, if these tantalizing symbols represent an early calendar, they offer a glimpse of how these hunter-gatherers synchronized their lives with the natural cycles of animals and the Moon.

In short, if the new hypothesis is accurate, it shows that our Paleolithic ancestors “were almost certainly as cognitively advanced as we are” and “that they are fully modern humans,” Bacon told Motherboard. It also means “that their society achieved great art, use of numbers, and writing” and “that reading more of their writing system may allow us to gain an insight into their beliefs and cultural values,” he concluded.

The post A Total Amateur May Have Just Rewritten Human History With Bombshell Discovery appeared first on VICE.