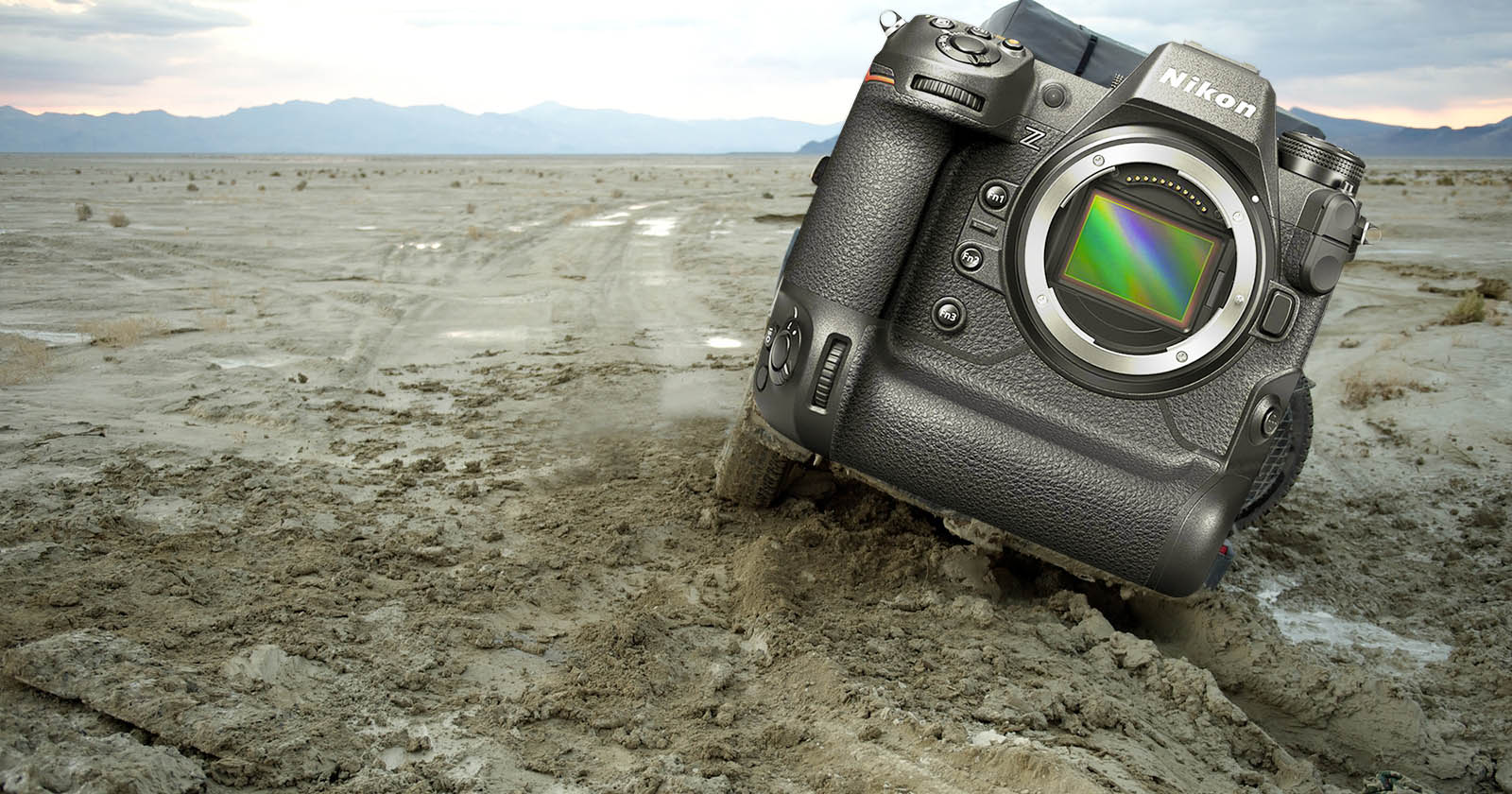 For photographers, creativity is the difference between a nice photo and a NICE photo. But what happens if you’re not feeling very creative? That’s when I like to dive into what I call my “photographer’s creative kit,” a bunch of different things to try.

This might mean using accessories, taking advantage of my camera’s unique menu options, trying different exposure techniques (like shallow depth of field), or simply something I remember another photographer doing well. Here are a few examples of how I used that creative kit during the four-day workshop I recently led in northern Georgia.

Sometimes, being creative means being able to see beyond obvious problems. When we hiked into Cherokee Falls at Cloudland Canyon State Park, it was pretty contrasty due to the full sun on one side and heavy shade on the other.

However, as I told the group, most of today’s cameras can have tremendous dynamic range when used at low ISOs. That means if you expose to protect the highlights, you have a good chance of overcoming that issue afterward in editing.

Here’s that same image, edited in Adobe Camera RAW, recovering overexposed highlights on the upper right and bringing back detail in the dark areas:

This tree in shade, against a sunlit background, caught my eye. But to make it really stand out, I needed a fast-aperture lens. That’s why I often carry a fast, “normal” lens with me. The f/1.4 models can be fairly large (and expensive), but the f/1.8 or f/2.0 are much smaller (plus less expensive).

If I’m trying to travel light, but think I might want to do some close-ups, I’ll bring along one or two extension tubes. They’re small, lightweight, and inexpensive, and can turn almost any regular lens into a close-up lens. You’ll have a more limited range of focus, but for occasional use, they’re great.

I tend to shoot (or process) black-and-white if the scene in front of me has an old-timey look or the color is bad. This was also at Finster’s Paradise Garden:

My cameras offer an in-camera multiple exposure feature, which I sometimes use while zooming the lens as I shoot. This is a seven-frame exposure where I did just that, of a ribbon at Myrtle Cemetery:

Here’s another multiple exposure photo I made at Barnsley Gardens and ruins, this time using the “Overlay” feature my camera offers (the option “ghosts” the first shot into the viewfinder, to help me better compose while creating the image):

About fifteen years ago I had one of my cameras converted to infrared, and have done that to a few other cameras since then. When I bought my Nikon Z 6 II, I sent my original Z 6 in for conversion so I make do “false color” infrared photos like this, at Barnsley Gardens:

We spent about four hours at Old Car City USA, and I knew that one photo I wanted to make would be from a high angle. Not having a drone, or tall ladder, I simply mounted the camera to my fully-extended tripod and held it up in the air.

To shoot the photos, I set the self-timer for ten seconds, then went further in the settings to have it take five frames at three-second intervals. That way I could move the tripod between shots to make sure I got at least one with the composition I wanted.

I’m a big fan of shooting hand-held since I can work faster and get the exact framing I want with less trouble. But even with excellent image stabilization, when I want to shoot at a small aperture and low ISO, resulting in a very slow shutter speed, I’ll take the time to put my tripod in just the right spot.

After a couple of hours wandering the acres of Old Car City USA on our own, we met for an optional flash class that I presented. To have less light in the sky (for the flash to compete with), I’d paid extra for our group to stay later. That, combined with a Godox AD200 flash off to the side, let us create photos like this:

Here’s what that scene looked like a few minutes earlier, using only available light:

And here’s some of the group, trying a different angle with the light in a new position: 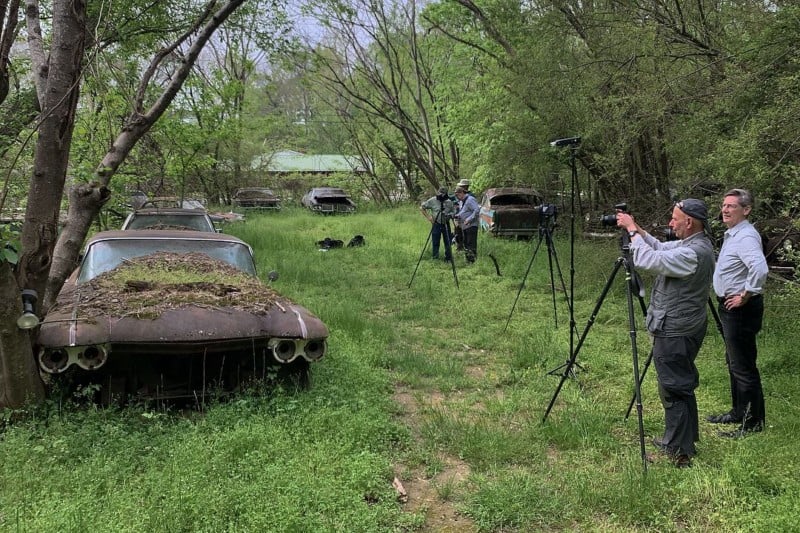 While exploring the New Echota State Historic site, I decided to take advantage of my camera’s focus stacking feature (“Focus Shift,” as Nikon calls it). With the camera on a tripod, I then have it shoot a series of photos from near to far, and assemble them later in Helicon Focus software. This gives me a sharper image with more depth of field than I could get otherwise, even shooting at the smallest aperture.

On a landscape trip, I always carry a few filters. Here, at the same location, I decided to use the ten-stop neutral density filter. That, combined with my tripod, let me make an exposure that showed both the movement of the clouds and the tree limbs blowing in the breeze.

We arranged some private time in the cave at Rolater Park in Cave Springs, GA. That gave us the freedom to set up a couple of Lume Cubes, turn off the installed lights, and make photos like this as part of a light painting demonstration I led.

We’d also planned to be at the Old Mill at Berry college after sunset for another session on light painting. I used a Lume Panel, hidden behind a tree, to light the water wheel. Then one Lume Cube on the ground in front of the house to light it, one off to the left to light the green tree near it, and another small panel behind the building to separate it from the background.

Our last morning was spent at Gibbs Gardens, a large and spectacular botanical garden. Again looking for something a bit different, I settled on this reflection, which had an Impressionist feel to it.

The final shoot of our week was at Amicalola Falls. Finding this scene with a good focal point (the rock) and a bit of color, I again broke out the tripod and the ten-stop neutral density filter for a classic “cottony water” look.

About the author: Reed Hoffmann is a photographer and photography instructor who has been in the photo industry for decades and who has used every Nikon DSLR (and taught most of them). The opinions expressed in this article are solely those of the author. Follow along with Hoffmann’s latest workshops here. You can also find more of Hoffmann’s work and writing on his website, Facebook, Instagram, and Twitter. This article was also published here.

Image credits: Header illustration based on photo from Depositphotos