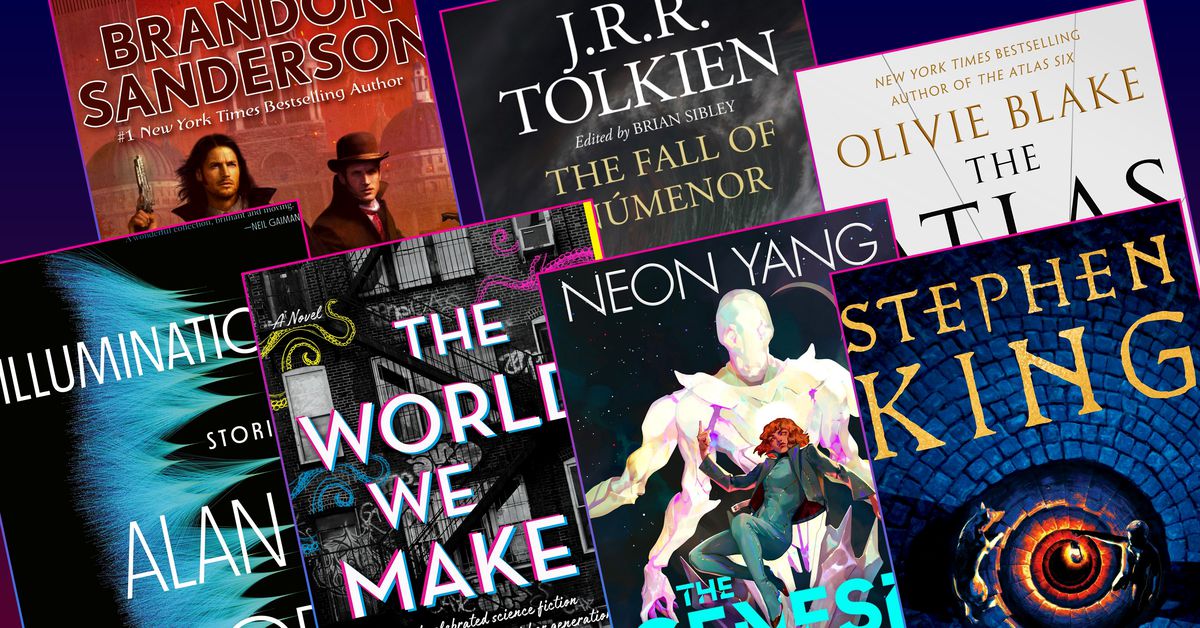 Have you ever wondered why so many highly anticipated books come out in the fall every year? It turns out, readers buy the most books between Labor Day and Christmas — and science fiction and fantasy are no exception. This fall is packed with new releases from N.K. Jemisin, Stephen King, S.A. Chakraborty, Brandon Sanderson, Neon Yang, Alan Moore, C.L. Polk, Mary Robinette Kowal and… J.R.R. Tolkien? (In a manner of speaking, yes. )

Here are our 17 most anticipated science fiction and fantasy books hitting shelves between Sept. 1 and Dec. 31, 2022.

At some point in the early days of the pandemic, Stephen King reportedly asked himself, “What could you write that would make you happy?” The resulting novel, Fairy Tale, is about a high school athlete named Charlie Reade. When Charlie starts doing odd jobs for a reclusive old man, he discovers a portal to another world — “a vast deserted city” and a “sprawling palace with glass towers so high their tips pierced the clouds.”

Everyone’s favorite space necromancers are back in the third installment of Muir’s Locked Tomb series. On the heels of Gideon the Ninth and Harrow the Ninth, the interplanetary saga of the Nine Houses pivots to a woman named Nona, who recently woke up in a new body with no memory of her life before. She was originally going to be a character in the final book of a planned trilogy, Alecto the Ninth, but according to Carl Engle-Laird (Muir’s editor at Tordotcom), Nona “could not be contained, and demanded her own volume,” which will make Alecto the Ninth the fourth and (for now) final book in fall 2023.

The author of one of the best novels of the 2010s — Severance (no, not the show) — returns with a brilliant short story collection that straddles many different genres, including science fiction, fantasy, and horror, all the while staying grounded in everyday realism. For a sneak peek, check out “Peking Duck” in The New Yorker or “Office Hours” in The Atlantic.

House’s dystopian seventh novel is a clever reversal of the Irish migration to America during the potato famine of the 1840s. In the near future, as the United States succumbs to wildfires, a family of American refugees flees across the Atlantic to Ireland, “the last country not yet overrun by extremists.” Of course, things are never what they seem when protagonists seek a safe haven in an apocalypse.

Aira’s short books are the literary equivalent of a Perigord black truffle — small, rich delicacies worth savoring and contemplating. This 48-page novelette is about an aging writer in Buenos Aires who stumbles upon a magician in a book market. Ovando presents Ovando with a “devil’s bargain”, which is omnipotence in return for the writer not reading or writing again.

The Genesis of Misery by Neon Yang (Sept. 27)

After earning Nebula and Hugo award nominations for their Tensorate series novella, The Black Tides of Heaven, Yang is back with their first full-length novel. The Genesis of Misery depicts Joan of Arc in the role of a space-fantasy fighter named Misery Nomaki who hears the voice of an Angel within their heads. It’s also the first book in a new series called the Nullvoid Chronicles.

The Mountain in the Sea by Ray Nayler (Oct. 4)

Have you been waiting your entire life for a novel about humans discovering a civilization of octopi? The wait is over! In Nayler’s debut, a marine biologist travels to an isolated Vietnamese archipelago to study a new (deadly) cephalopod species with off-the-charts intelligence. But in true Michael Crichton fashion, a tech company has already purchased the islands and evacuated the locals — and it’s got its own agenda for the octopi.

This is the first-ever short story collection from Alan Moore, best known for writing comic books like Watchmen, V for Vendetta, From Hell, and Batman: The Killing Joke. More than 40 years in the making, some of these stories have never been published before, and they bounce between genres with glee. These stories include ghosts, sorcerers and creatures. There’s also a novella called “What We Can Know About Thunderman” that the author of 17 is describing the history of comic book publishing.

Tor is billing this as “The Thin Man in space.” The Spare Man is a mystery set on a luxurious, interplanetary cruise ship from the author of The Calculating Stars, which won both the Hugo and Nebula awards for best novel in 2019. The heiress and inventor Tesla Crane is shocked to learn that her husband was convicted of murder while on honeymoon.

Chakraborty’s Daevabad trilogy — The City of Brass, The Kingdom of Copper, and The Empire of Gold — is among the most celebrated fantasy series of the century so far. The story is set within the same universe and includes new and old characters as well as material never before seen.

Blake’s self-published series starter, The Atlas Six, absolutely blew up on TikTok last year like few books have before or since. After becoming a viral sensation, Tor picked it up (and the rest of the planned trilogy). In December 2021, Amazon announced a forthcoming TV adaptation of the series, and now the second novel is hitting shelves on Oct. 15. The series will follow the adventures of the six magicians who were part of the Alexandrian Society. This secret organisation is dedicated to protecting lost knowledge from the ancient worlds.

Who can forget 2020’s The City We Became, Jemisin’s mold-breaking novel about five people who become living avatars of the boroughs of New York? This sequel will complete the Great Cities duology, as the New York avatars team up with other cities around the world to defeat “the Enemy” and her puppet: a mayoral candidate hellbent on making New York whiter and wealthier.

Polk, who won a World Fantasy Award for their debut novel Witchmark in 2019, reimagines midcentury Chicago as a breeding ground for “divine monsters” and serial killers, like the White City Vampire. Even Though I Knew the End is also a noir romance between a magical detective and the woman she loves, as well as a supernatural murder mystery.

Sanderson’s original Mistborn trilogy is widely considered one the best fantasy series ever written. The Lost Metal is the fourth and final book in the follow-up Wax and Wayne tetralogy, set 300 years after the events of the trilogy. Are you still confused? You are now at the Cosmere.

This anthology features 32 science fiction and fantasy stories from African writers living on the continent and of the diaspora, including Tananarive Due, Tobias S. Buckell, Ytasha L. Womack, Sandra Jackson-Opoku, and Wole Talabi. You can expect cyborgs and spirits as well as robots, djinn, rain gods and robots.

Tread of Angels has a really unique combination of setting and premise: In 1883, a mining town in the Colorado mountains experiences a gold rush when a new element called Divinity is discovered beneath the earth. But this isn’t our Colorado — it’s home to the descendants of demons and angels, many years after an ancient war.

Fans of Prime Video’s The Rings of Power will eat up this newly expanded collection of writings about the Second Age of Middle-earth (the period of time covered by the new TV series), including Tolkien’s “Atlantis” myth set in the island kingdom of Numenor, the rise of Sauron, and the forging of the rings of power.

The post 17 upcoming sci-fi and fantasy books to look forward to in 2022 appeared first on Polygon.