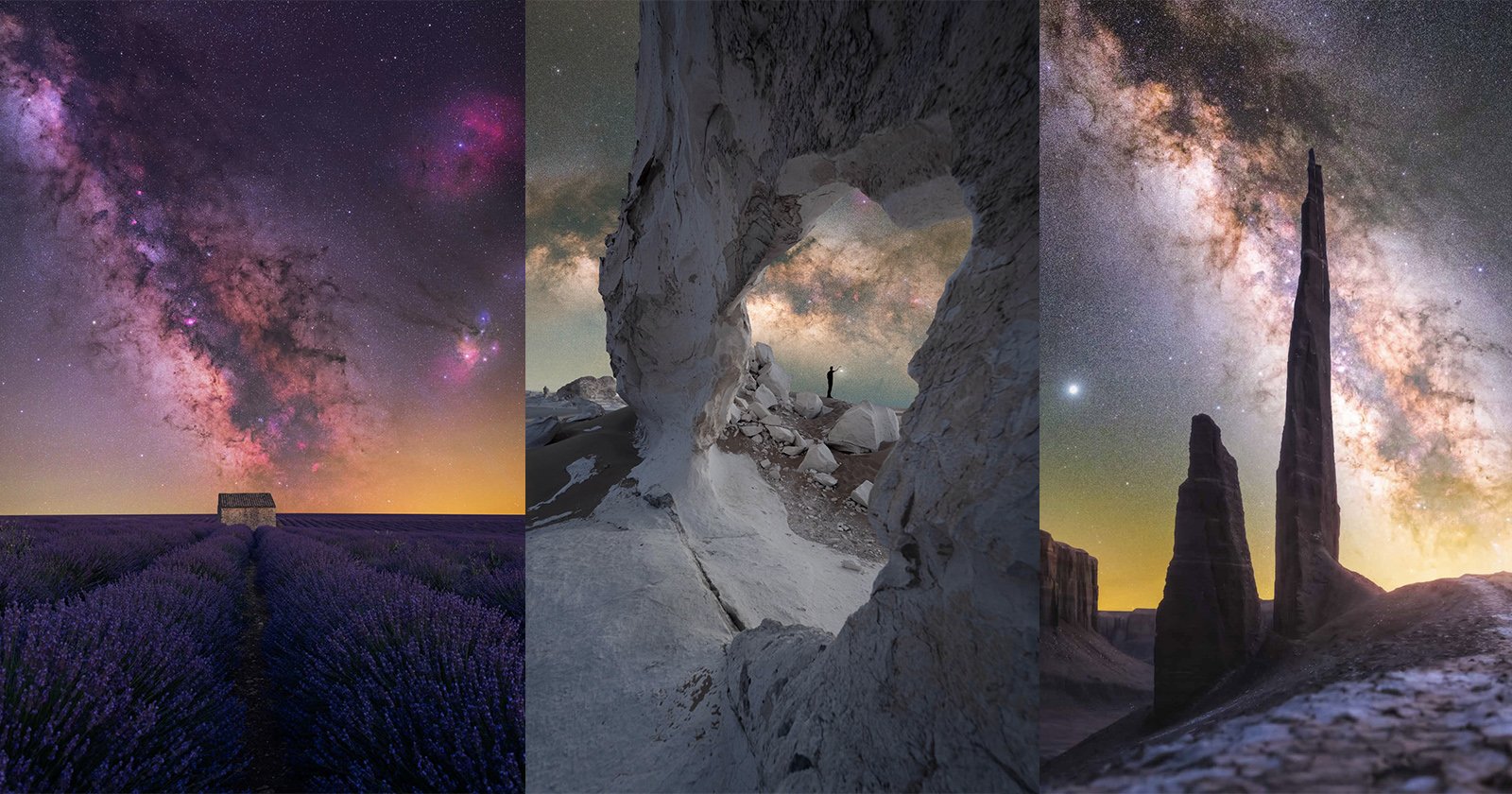 Travel and adventure photography blog Capture the Atlas has published its annual Milky Way Photographer of the Year collection that showcases the best night sky captures from all around the world.

Breathtaking Milky Way Photos From Across the World

The publication highlights the 25 best entries to the collection and publishes the results in late May each year, coinciding with the peak of the Milky Way season. Capture the Atlas aims to inspire and share the beauty of the galaxy through each year’s collection.

The publication looks for the quality of the photo, the story behind the shot, and the overall inspiration the photograph can provide as the main factors for including images in its annual showcase.

Dan Zafra, the editor of Capture the Atlas, works on curating these photos throughout the year. He looks not only for photos taken by some of the most renowned photographers but also for new talents and for new locations where the Milky Way hasn’t been captured before, such as the Tibet and Xinjiang photos from this year’s edition.

Below are 10 of the inspiring images from this year’s selections with the stories of each as told by the photographers that captured them:

“This lake, located in Tibet, freezes every winter. At night, under the low temperatures of minus 20 degC (-4 degF), you can listen to the sound of the ice cracking while capturing the most beautiful winter sky. Blue ice and the Orion constellation make for a magical landscape.

“I felt so happy to have the stars as my companion on this magical night.”

“This year, I went to Egypt for the first time. The white desert was our focus here, in a place full of nature and Bortle 1-2 skies.

“From Cairo, we drove about five hours west to our base camp, where we always started our explorations. Egypt’s desert is split into two parts: the White Desert and Black Desert.

“As its name suggests, the Black Desert consists of dark soil and large hills, while the White Desert is somewhat rugged but mostly consists of fine, light Saharan sand.

“This part is really exciting because, in addition to photogenic sand dunes, there are also a lot of particularly shaped rock formations. Many of the rock formations here are unique and can be arranged in a variety of ways due to the numerous sandstorms. You will easily believe me when I say that it was really fun to be here.

“We did our best to scout and shoot, but, considering the size of the desert, there is still a whole lot more to be discovered here.”

“Lighting the Milky Way” — Jinyi He

“This photo was taken in Dahaidao Desert, the no-man’s-land in Xinjiang. Because of the often fierce wind, this area gradually eroded into separate hills that take on the unique shape of a yardang.

I found this location online after lots of research and drove there in a land Cruiser with GPS.”

“I captured this image of the Milky Way last summer in Valensole, France. The smell and atmosphere of these lavender fields are unreal, and standing there among them in the middle of the night is blissful, especially since the bees have gone to sleep and you don’t risk getting stung!

“Nothing is better than a warm summer night with a beautiful view of the night sky and this lonely, iconic house that sits in the middle of the lavender plateau!”

“The badlands of Utah are brimming with stunning, unearthly landforms, hidden in the seldom-seen corners of the desert.

“This needle-like pinnacle is one such location nestled below a set of blue shale cliffs in the Hanksville Badlands. This region has some of the most beautiful and clearest night skies in Southwest. On clear, moonless nights, the stars shine bright enough to cast perceptible shadows on the ground, as they did on this night when I was standing below the Needle.”

“Some of the darkest and most underrated skies in New Zealand are along the West Coast of the South Island, a place I am so fortunate to call home.

“Motukiekie, situated along The Great Coast Road, is a truly unique area where our southern Milky Way’s galactic core sets over the ancient sea stacks and exposed reefs.

“While not the composition I was hoping to shoot this night, due to a big swell hindering any chance of getting out onto the main reef, I’m still incredibly happy with what I came away with and really quite proud of the fact I was out shooting at all, as I had just had a baby 6 weeks earlier. The sleep deprivation I was feeling was next level!”

“Path to the Past” — Jose Manuel Galvan Rangel

“‘A natural paradise’ — that’s the best way to describe the Spanish region of Extremadura.

“Not only are the flora and fauna of this lesser-known region spectacular, but so are the night skies, which are full of millions of stars that seem to light up when night falls and are free of pollution and parasitic lights from large cities. Extremadura has many Starlight Reserves. Many astrophotographers choose this region as their favourite destination because of its beautiful skies.

“I took this photograph in a remote town in the southwest part of this community called ‘Salvatierra de Los Barros.’ In this town that’s practically unheard of by the rest of the world, you’ll find an imposing, privately-owned castle that has been standing, under the light of millions of stars, since the fifteenth century.”

“I love nature and being somewhere outside under a starry sky in serene silence. That’s when I feel free, but, at the same time, so small.

“What always excites me about photographing the night sky is that you never know what to expect; surprises are happening all over the sky. You just need to be in the right place at the right time. In the end, the experience never disappoints me in any way.

“This was one of my most anticipated locations in 2021 that my friend and I planned for 6 months in advance. We were rewarded with great success. The weather was great at first, but as the night progressed, high clouds appeared, which, unfortunately, obscured what was happening in the sky. However, I was able to capture a few meteors that brightened the night. I was surprised to discover that Mangart Saddle had a lot of sunlight from every direction, which made it a great location for photographers looking for memorable moments and photos.

“On the left side of the image is the road that leads to Mangart Saddle. The Mangart Hut is a beautiful spot in the middle the Saddle, where you will be able to sleep and enjoy local food. The highest peak in this part of the Julian Alps is Mangart (2,679 meters), the third highest mountain in Slovenia above which the Andromeda Galaxy emits its light. Just to its right is Jalovec Mountain, and the Loska Walls. These rise over the valley of Loska Koritnica. it was an unforgettable night spent in the great company of friends.”

“These petroglyphs were carved into a large volcanic boulder by Native Americans who inhabited this part of Eastern California thousands of years ago. By chipping away at the dark surface of the rock, they exposed the lighter rock underneath.

“What’s unusual about this panel is that it faces upward towards the sky, enabling some interesting compositions that include the California Sierra Nevada mountains and the night sky in the same frame.”

“Although the winter portion of the Milky Way is much weaker than the summer portion, it’s still full of beautiful features that also deserve attention. The Galaxy’s Winter Hexagon Asterism is a bright star in this part.

The galactic arms contain many hydrogen-alpha nubulae. These are objects almost always invisible, but can be seen with an Astro-modified digital camera. A special Ha filter was also applied to capture the H-alpha emission in greater detail.

“The arc of our Galaxy is stretching above the Low Tatras mountains in Slovakia, where the temperatures dropped below -14degC that night. Over the subject (me), there’s a bright cone of zodiacal light pointing to nice conjunction at the time: the Red Planet, Mars, just between two open star clusters, the Pleiades and Hyades.”

The full 2022 collection of photos can be found on the Capture the Atlas website, alongside the helpful Milky Way photography guide and the 2022 Milky Way viewing calendar.

Image credits: All photos individually credited and provided courtesy of Capture the Atlas.